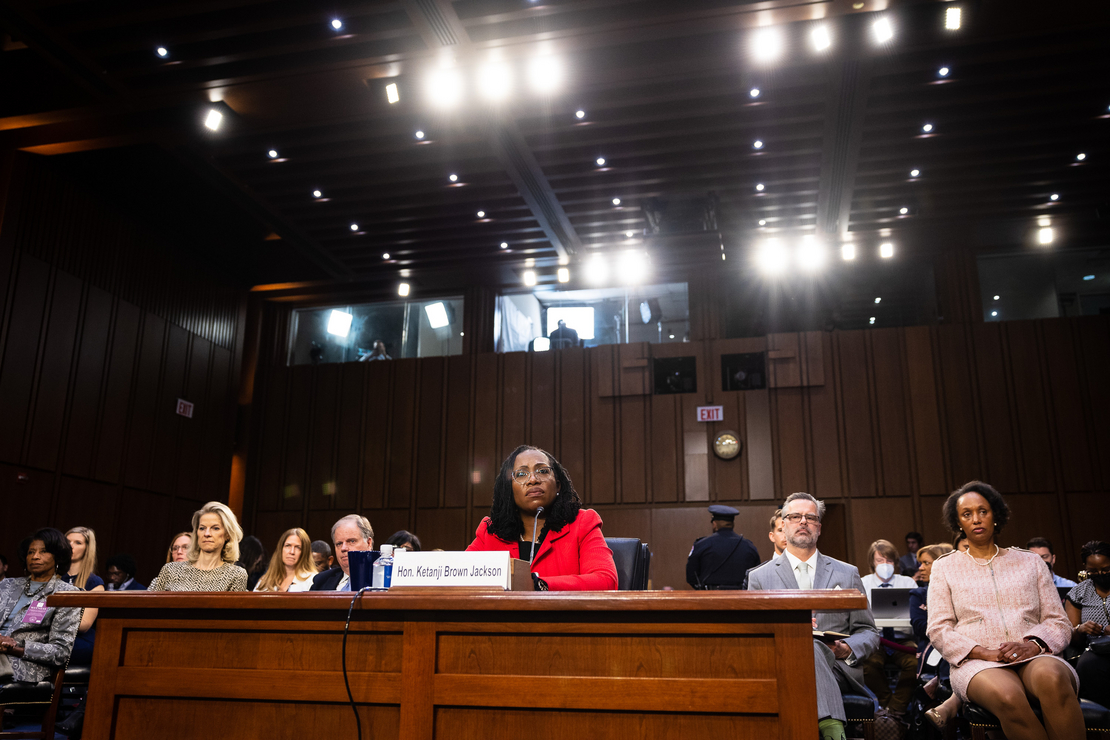 Judge Ketanji Brown Jackson yesterday defended the Supreme Court’s emergency docket, while promising to take a closer look at how it is used in certain cases.

During a marathon hearing before the Senate Judiciary Committee, Sen. Amy Klobuchar (D-Minn.) asked the Supreme Court nominee when it is appropriate to use the “shadow docket.”

“These decisions have a profound effect on people’s lives,” Klobuchar said.

In the past several years, justices have issued such emergency orders in high-profile legal fights, including EPA’s carbon rule for power plants.

Jackson, whom President Biden has tapped to replace retiring Justice Stephen Breyer, said there is “a balance that the court has to consider” when it determines if a legal question requires an urgent answer or if it’s best to allow an issue to percolate in the lower courts.

“If I was fortunate enough to be confirmed, I would look at those issues,” Jackson said.

The Supreme Court has been criticized for its use of the shadow docket in recent years to make substantive policy changes — often in favor of conservative interests. Prior to about 2015, the justices had used emergency orders to address more mundane procedural issues.

Many legal observers point to the Supreme Court’s unprecedented 2016 stay of the Obama administration’s Clean Power Plan as the turning point for the court’s approach to its shadow docket (Greenwire, Aug. 24, 2021).

After receiving criticism for using its shadow docket to issue quick, mostly unexplained and sometimes divisive orders, the Supreme Court has shifted to an approach known as the “rocket docket,” in which the justices fast-track arguments and rulings in cases on high-profile issues.

Recent examples include battles over state abortion laws and the Biden administration’s mandate that workers at large companies either vaccinate themselves against Covid-19 or submit to testing and masking requirements.

The vaccine-or-test case addressed regulatory issues that are a core part of West Virginia v. EPA, a blockbuster climate case on the court’s regular docket that relates to the federal government’s ability to broadly regulate greenhouse gas emissions from power plants — as the Obama administration did with its Clean Power Plan (Greenwire, Jan. 14).

The rule never officially took effect after the Supreme Court froze its implementation in 2016 and the Trump administration later gutted the regulation in 2019.

Jackson wouldn’t be confirmed to the court in time to participate in the West Virginia case, which was argued Feb. 28. But she would likely rule in other major legal battles over the scope of the federal government’s climate authority (Climatewire, March 18).

Sen. Chris Coons (D-Del.) yesterday cited one of Jackson’s biggest environmental rulings yesterday in response to criticisms from Republican lawmakers that the judge is a progressive activist.

While she was a judge of the U.S. District Court for the District of Columbia, Jackson ruled against green groups in their challenge to the Trump administration’s efforts to exempt itself from bedrock environmental laws to complete its border wall project (Greenwire, Sept. 5, 2019).

“If you were an activist judge, a motivated partisan determined to let these plaintiff environmental groups proceed, you certainly could have,” Coons said.

Coons’ questioning followed a line of inquiry from Sen. Ted Cruz (R-Texas), who attended Harvard Law School with Jackson, that sought to associate the judge with critical race theory through past speeches and through her participation on the board of Georgetown Day School.

The doctrine says that racism is embedded in U.S. institutions and has become a hot-button issue in education. Lawmakers in some conservative areas have passed or proposed legislation to prevent K-12 schools from teaching critical race theory — although many schools say they do not teach it.

“Senator, my understanding is that critical race theory is an academic theory, that it is about the ways in which race interacts with various institutions,” said Jackson. “It doesn’t come up in my work as a judge.”

“In your nine years on the bench and more than 570 decisions, have you ever used, employed or relied upon critical race theory to determine the outcome of any case or to impose as a framework for your decision?” he asked.

The Judiciary Committee will convene again this morning for its last day of questioning for Jackson.

The judge, who currently sits on the U.S. Court of Appeals for the District of Columbia Circuit, is widely expected to be confirmed to the Supreme Court, even if she does not draw any Republican supporters.

Although she has been backed by Republican-appointed judges and former GOP politicians, it’s not clear whether Jackson will be confirmed by a bipartisan vote. Three Republicans voted in her favor for the D.C. Circuit, but none of those lawmakers has committed to supporting her this time around.

Sen. Lindsey Graham of South Carolina, one of the Republicans who voted for Jackson to be elevated to the D.C. Circuit, seemed unlikely to support her Supreme Court nomination yesterday.

The Senate can use its 50-50 Democratic majority — with Vice President Kamala Harris as the tie vote — to seat her on the court. If confirmed, Jackson would be just one of three liberal justices on the Supreme Court.

Jackson has been a federal judge for nearly a decade. She has previously served in private practice, as a federal public defender and as a member of the U.S. Sentencing Commission. She once clerked for Breyer, and she would be the first Black woman to serve as a Supreme Court Justice.