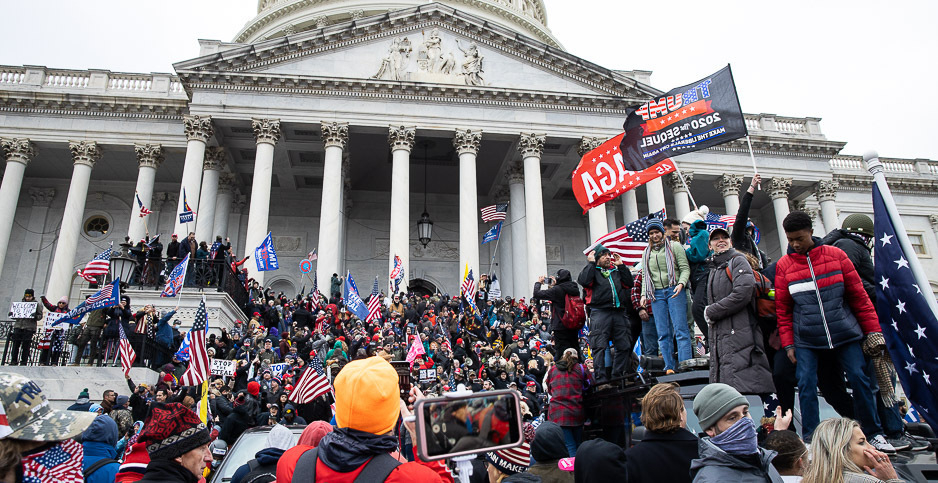 On Jan. 6, 2021, the same day that President Donald Trump told his supporters “we will never concede” ahead of a violent attack on the U.S. Capitol, his political appointees at EPA were preparing for the incoming Biden administration.

Top EPA officials had met earlier that week to discuss the process for collecting resignation letters from political appointees — a customary practice when administrations change hands, according to emails released this week under the Freedom of Information Act.

“Barring there being a state of national emergency tomorrow or something, my understanding is resignation requests will need to be sent out,” EPA’s White House liaison Micah Meadowcroft wrote to the agency’s chief of staff, Mandy Gunasekara, on Wednesday, Jan. 6, 2021. He noted that those resignation letters had previously been discussed on Monday.

The just-obtained emails offer a glimpse into conversations among EPA’s top aides in the final days of the Trump administration as the president’s supporters waged an unprecedented attack on the Capitol in a bid to overturn the results of the 2020 presidential election. Their release comes as a special committee in Congress is releasing the findings of its investigation of Trump’s claims of election fraud and the assault on the Capitol.

At EPA on Jan. 6, Meadowcroft was circulating a template that political appointees could use to resign. “To those cc’ed,” Meadowcroft wrote in the email that copied other EPA employees, “keep your chin up and don’t let the news ruin your day.”

EPA had already prepared lengthy guidance to help usher out political appointees as they planned to leave government service, the emails show. Gunasekara’s schedule for Jan. 7 included emails titled “Offboarding Information for Political Appointees” and “Exit Conversation,” according to an email she received on Jan. 6.

“Submitting resignation letters is standard practice,” Gunasekara told E&E News this week. “We were following the directions laid out to us by the career HR team.”

Gunasekara also received on Jan. 6 last year a document filled with instructions titled “EPA Outgoing Appointees Transition Book.” It was dated December 2020 and packed with bureaucratic details for departing Trump officials about things like how to preserve emails and turn in their government-issued laptops.

Then-EPA Administrator Andrew Wheeler was clearly planning to step down. Gunasekara was discussing with the White House Office of Cabinet Affairs about how to purchase his Cabinet chair from the White House.

“Is it as simple as writing a check and then organizing the pick-up?” Gunasekara asked in the Jan. 6 email.

Wheeler didn’t respond to questions from E&E News for this story, including whether he ultimately purchased the Cabinet chair.

EPA entrances ‘will be locked’

The Trump administration was under fire in January 2021 for dragging its heels on the transition as the president continued to make false claims about election fraud. Among other procedures the White House slow-walked was requesting resignation letters from political appointees.

In other transitions, that request came much earlier. When President Barack Obama was leaving office after the 2016 election, he asked political appointees to send him their resignation letters by Dec. 7 that year.

Despite White House resistance, Trump appointees at EPA and elsewhere across the government were preparing to leave their jobs in January to make way for Biden’s team.

But even as the paperwork-heavy process of a presidential transition was underway at EPA headquarters on Jan. 6, Trump was a few blocks away telling supporters at the Ellipse that he would never concede losing the election to Biden.

“Today I will lay out just some of the evidence proving that we won this election and we won it by a landslide,” Trump told a crowd of his backers that day.

His supporters had gathered in Washington to protest the congressional certification that Biden beat Trump in the 2020 presidential election. About an hour after Trump’s remarks, protesters broke through barricades outside the Capitol. In the hours that followed, a mob flooded into the Capitol, smashing windows and breaking into offices as members of Congress and Vice President Mike Pence took shelter.

That attack prompted Washington Mayor Muriel Bowser to issue a citywide curfew at 6 p.m. on Jan. 6, 2021.

Employees at EPA headquarters were asked to clear out of the building by then. “All entrances to EPA buildings at the Federal Triangle will be locked at that time,” said an email to employees. “We encourage all EPA staff and contractors to exit the facilities before 6:00pm.”

Resignation letters started coming in, but some political appointees said they were leaving prior to the change in administrations on Jan. 20.

Amanda Kasper, a senior adviser to Wheeler, resigned from EPA in a letter dated Jan. 6.

Following “today’s events, I cannot, in good faith or conscience, continue to uphold my duties on behalf of the Administration,” Kasper wrote. She said she planned to stay until Jan. 13 to allow for off-boarding. She also told Wheeler in an email that she valued his leadership and would always be grateful for his trust and confidence during her time at EPA.

“My resignation on January 6 wasn’t intended to make a point to anyone in the EPA or the administration as much as it was about upholding my own values and sense of self. It wasn’t my place to try convincing or influencing anyone to follow me or anyone else in staying or going,” Kasper told E&E News this week.

She continued, “From my perspective too, any opportunity to be effective in the time that was left had evaporated and I wanted to at least look back at my EPA experience with pride for what was accomplished and all the great people I’d met and worked with along the way.”

Other Trump political appointees stepped down early, citing the attack on the Capitol. They included Brittany Bolen, who led EPA’s policy shop under Trump, and Joseph Brazauskas, who headed the agency’s congressional and intergovernmental relations office. Others criticized Trump for his failure to accept defeat in their resignation letters but stayed at EPA until his administration’s last day (Greenwire, April 6, 2021).

Wheeler told employees in a Jan. 7 email that he was “completely disgusted” by what happened at the Capitol, but he said he’d stick around until Jan. 20 “in order to provide as smooth a transition for the Agency as possible” as the Biden administration took over.

The day before, Gunasekara responded to Meadowcroft’s message about resignation letters. “Thank you and everyone stay safe,” she said in her own email.

Questions over the 25th Amendment

Trump was impeached a historic second time by the U.S. House on charges that he incited the riot at the Capitol. He was later acquitted in a Senate trial.

But other efforts to remove Trump from power were under discussion during his last days as president. Those have fallen under scrutiny from the House select committee.

“You will hear about members of the Trump Cabinet discussing the possibility of invoking the 25th Amendment and replacing the president of the United States,” Rep. Liz Cheney (R-Wyo.), the panel’s vice chair, said at a hearing last week, adding that several members of Trump’s Cabinet resigned after the Jan. 6 attack.

Under Section 4 of the Constitution’s 25th Amendment, the vice president and a majority of the Cabinet, described as “the principal officers of the executive departments,” can declare the president “is unable to discharge the powers and duties of his office.” The vice president then assumes the power of the office as acting president.

That meant Interior Secretary David Bernhardt and Energy Secretary Dan Brouillette, as heads of executive departments, could weigh in on the process. Wheeler, leading an independent agency as EPA administrator, likely could not, although he was classified as Cabinet-level (Greenwire, Jan. 8, 2021).

Questions from reporters poured into the Interior Department on whether Bernhardt supported invoking the 25th Amendment, records obtained by E&E News under FOIA show. Aides noted the queries but weren’t quick to respond.

“Yep, I see a lot of it on social,” said Todd Willens, then chief of staff at Interior, in an email acknowledging a colleague who had forwarded on a reporter’s message.

Pressure came from Congress to have Cabinet officials remove Trump.

Lawmakers sent a letter to Vice President Mike Pence requesting he invoke the 25th Amendment. The Cabinet, including Bernhardt, was copied on that letter, which was also emailed to Interior.

Bernhardt was not on board with the idea, according to the emails.

“No, the Secretary does not support that. The Secretary is committed to ensuring a smooth transition to the Biden-Harris Administration,” Nick Goodwin, then Interior’s communications director, told one reporter in an email.

Pence would reject the plan publicly, saying in a letter to House Speaker Nancy Pelosi (D-Calif.) that invoking the 25th Amendment was not in the best interest of the country or consistent with the Constitution. That letter also made its way to Interior.

“Don’t know if you saw this?” a colleague asked Willens in another email about Pence’s letter.

In the end, Pence and the Cabinet never called upon the 25th Amendment to remove Trump from power. Meanwhile, top officials from the Trump administration settled their affairs as they readied to leave government.

Wheeler emailed Henry Darwin, a top EPA official who had served as acting deputy administrator, an attachment titled “Final Speech.docx” on Jan. 19, 2021, the day before he left office.

“I’ve given a lot of speeches during my time here as the Administrator and this one is the hardest,” the following document said. “Partly because [it’s] two years too soon. Mostly because I’m going to miss seeing all of you regularly.”

Wheeler’s remarks continued on, listing the Trump EPA’s triumphs as well as grievances.

“The press may not acknowledge our accomplishments. Environmental groups will say we didn’t do enough, or worse. The Democrats will demagogue this for fundraising and election purposes,” the document said.

It added, “But we know what we have done. We know we made the best decisions for the American public, and there are literally millions of Americans who appreciate us for what we have accomplished. At least 74 million of them.”

Seventy-four million Americans voted for Trump in the 2020 election. Wheeler also did not respond when asked for more details about the speech.