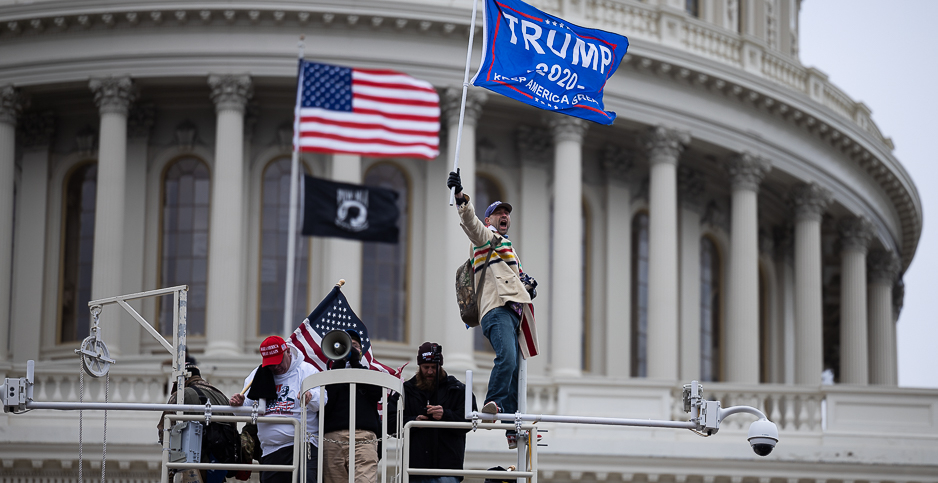 Supporters of then-President Trump climb on an inauguration stand on the west front of the Capitol on Jan. 6 to protest the certification of Joe Biden's Electoral College victory. Francis Chung/E&E News

The Interior Department is being asked to turn over documents to Congress related to the Capitol insurrection.

Rep. Bennie Thompson (D-Miss.), chair of the House Select Committee to Investigate the January 6th Attack on the United States Capitol, asked for the materials today as part of the panel’s first, massive records request pertaining to federal agencies, government staff, elected officials and private citizens with some connection to the violent events that transpired that the day.

In a letter to Interior Secretary Deb Haaland, Thompson provided a Sept. 9 deadline for producing “documents and communications received, prepared, or sent between December 1, 2020, and January 20, 2021, relating to the counting of the electoral college vote on January 6, 2021, the potential for demonstration, violence, or attacks in the National Capital Region on or around January 6, 2021, and the events or aftermath of January 6, 2021.”

Specifically, Thompson is seeking communications relating to permits or permit applications for events in Washington regarding the 2020 presidential election, that would have been issued by the National Park Service between Nov. 3, 2020, and Jan. 20, 2021.

For Jan. 6, NPS granted just one public gathering permit for a “Save America” rally at the Ellipse in President’s Park, requested by “Women for America First” and billed as a “First Amendment rally” to accommodate 5,000 people.

The number of people who actually attended the event far exceeded that estimate, and the gathering became the site of the violent rhetoric that culminated in President Trump’s speech urging supporters to march to the Capitol to demand that lawmakers stop certifying the ballots in the election that resulted in his defeat.

Thompson is also requesting documents and communications from Jan. 6 relating to the deployment of law enforcement personnel to the Capitol complex, and asking Interior’s Office of the Secretary and Office of the Deputy Secretary, the National Park Service, and the U.S. Park Police for correspondence “relating to the potential for violence or attacks” the day Congress was scheduled to meet to certify the results of the presidential election in favor of Joe Biden over Donald Trump.

Thompson’s request today calls for documents and communications relating to any “potential or actual changes” in Interior Department senior personnel and instructions to “stop or delay activities” in preparation for the transfer of power between the Trump and Biden administrations.

Finally, he wants any records of anyone “internally expressing concerns about the Government’s ability to handle events that could or ultimately did transpire on January 6, 2021.”

The other agencies facing similar demands for document disclosures from the previous administration are the departments of Defense, Homeland Security and Justice. The National Archives and Records Administration, the Federal Bureau of Investigation, the National Counterterrorism Center and the Office of the Director of National Intelligence also received letters today.

The Interior Department press office had no comment on whether it would be able to meet the Sept. 9 deadline to turn over materials.