Jane Fonda is ready for her last close-up 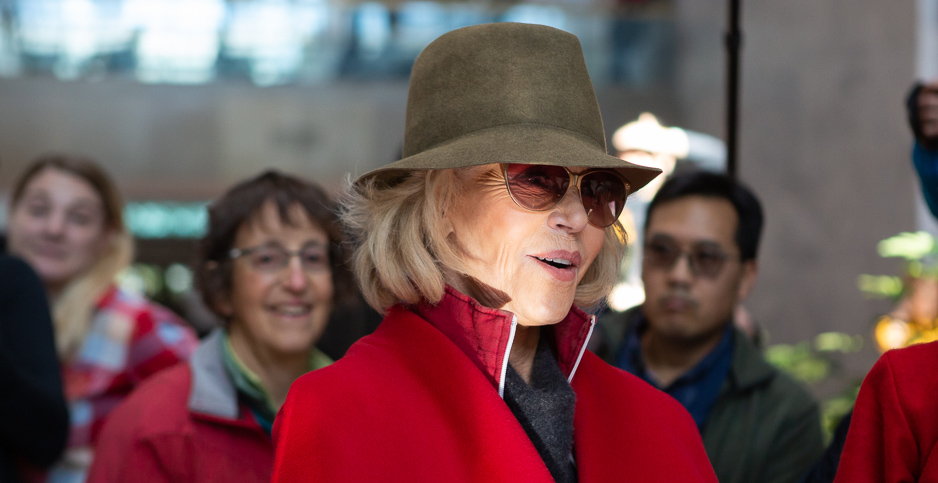 Actress Jane Fonda is trying to bring attention to the climate challenge by getting arrested on Fridays. Francis Chung/E&E News

Jane Fonda was waiting to get arrested in the Hart Senate Office Building when she decided to put on a little fashion show.

Surrounded by about 20 cameras, she spread her coat: "I needed something red, and so I went out and found this coat on sale. And this is the last item of clothing I’m ever going to buy."

The heiress to Hollywood royalty, former model and notorious activist then allowed herself a moment of self-deprecation. "To say it’s the last in my life doesn’t mean much," the 81-year-old said.

Soon, the police would zip-tie her wrists and frog-march her to jail, one of the four times she’s deliberately gotten herself arrested to promote the Green New Deal. She used the red coat as a mattress during her night behind bars, she told reporters.

The arrests are part of a weekly parade of celebrities and activists that come to Capitol Hill for Fonda’s Fire Drill Fridays. They start with speeches by activists, poets, actors and hippies-turned-ice-cream tycoons. Fonda cedes them the stage, rocks back and forth to their verses, or holds someone and sways to their music. Then they march and sit in, sometimes while organizers and police quarrel over the manner of their arrests.

Fonda and her gray-haired companions are trying to boost the climate movement at a time when young people are grabbing at power themselves. The world-famous Fonda is emulating the biggest star of that new generation, Greta Thunberg, the Swedish 16-year-old whose weekly school strikes bloomed into an international climate movement.

Where Thunberg protested outside the halls of power, Fonda has leveraged her privileges to push inside.

"Y’know, I’m a celebrity. So this is a way for me to use my celebrity and get the message out," she said after wearing her hat and sunglasses through a metal detector in a Senate office building.

Cameras and barking reporters surrounded her as soon as she passed through.

"You all are here, so I think it’s working," she said.

It would be a mistake to write off Fonda’s weekly spectacles as just a Hollywood liberal putting herself in the news, activists said.

Rather, it’s one indication that something is changing on the left — there’s more energy, more attention and more people trying to influence climate policy than ever before. Two years ago, the Democratic Party had a short climate agenda and no interest in the Green New Deal. Now, activists have pressured every major Democratic presidential candidate to outline their plans for fulfilling it.

Advocates, especially people of color and residents of vulnerable communities, have been working for decades to get this kind of attention. Historically, it’s been the young and the marginalized organizing in the streets, while professionals with access to power — typically white, male and older — channeled those sentiments into policy through legislation or the courts.

Now, young black and brown organizers are winning elections, like Rep. Alexandria Ocasio-Cortez (D-N.Y.). And some famous Democratic donors are using their bodies as well as their wallets to make climate protests more disruptive.

Fonda — who has donated over $100,000 to Democratic candidates and groups since President Trump’s election, according to OpenSecrets — has been arrested protesting with actors Ted Danson ($18,000) and Sam Waterston ($12,000), and she’s staged a White House sit-in with the co-founder of Ben and Jerry’s ice cream, Ben Cohen ($10,000).

"It’s going to be necessary for us to put our bodies on the line," Cohen said to a cheering crowd before they marched to the White House.

That’s good for the movement, activists said. Their status makes people pay attention. Their privilege frees them to act boldly. And their message — for the Green New Deal, and against those who would water it down — validates years of organizing work.

"Having people who come from enormous amounts of privilege say, ‘This is wrong; we need to change everything,’ really matters," said Sofie Karasek, a spokeswoman for the Sunrise Movement.

At Fire Drill Fridays, there’s a sense of transgression and glamour. Participants say they’re working for a livable future. Hanging out with movie stars and tangling with the police suggests another appeal: It makes climate protests look cool.

Too many people underestimate that power, said Julian Brave NoiseCat, vice president of policy and strategy for the left-wing think tank Data for Progress.

"People always talk about things being a fad and that being a problem," he said. "But I don’t know that it’s always fully a problem. Like, you want people to be excited and engaged with your thing."

It’s not always clear what Fire Drill Fridays are leading to. Fonda is calling for a Green New Deal, but the methods for achieving it — beyond her weekly performances — usually remain in the background. The "teach-ins" she holds the night before her rallies usually focus on policy, like the military’s carbon emissions, rather than tactics for building power. She even avoids talking about the Democratic presidential primary, except to say things like "It’s too late for moderation."

Activists say that’s OK. Fonda’s spectacles — along with Thunberg’s speeches and the international climate strikes — don’t have to accomplish everything on their own. They’re good at grabbing attention and interest; other organizations like Sunrise are built to channel that energy into power.

"There’s different approaches to how we build this movement that are all necessary and required," said Dianne Enriquez, co-director of community dignity campaigns at the Center for Popular Democracy.

Organizers said Fonda’s actions fit into a model that has been used since at least the civil rights movement: Advocates stage a polarizing demonstration that dramatizes an issue and forces observers to take sides; those sympathetic to the activists are received by organizations that act as connective nodes within a larger movement, and also serve as a local hub for more demonstrations.

"When you look at the way that people have [historically] organized and used protest, there’s an element of performativity to it," said Adrien Salazar, a senior campaign strategist for climate equity at Demos, a liberal think tank.

He mentioned the Montgomery, Ala., bus boycott, where the story of Rosa Parks’ treatment galvanized others to walk through the cold and the rain rather than ride segregated buses. That drew some of the first Northern media attention to civil rights demonstrations.

"It can be very structured, in order to draw as much attention as possible to the issues," Salazar said.

At Fire Drill Fridays, that structure can look a bit chaotic.

Fonda was marching at the head of at least 300 people when the police interjected — too early.

Barely off the Capitol’s east lawn, demonstrators were spilling off the narrow sidewalk into the streets. That’s when police brought out the bullhorn to cut through the chants: "Ladies and gentlemen, you are demonstrating without a permit. Discontinue, or you’re subject to arrest."

Organizers rushed over. They were supposed to get arrested at the White House, not outside the Supreme Court. They tried reasoning with the officer; they explained that squeezing onto the sidewalk would mean closing their banner and exposing Fonda to "the paparazzi."

The officer turned without a word and walked away. Capitol Police had been arresting Fonda for four weeks already. Inside the Hart Senate Office Building, they had waited for protesters to sort themselves into bystanders and arrestees. Now, in the streets, their patience seemed to run thin.

But the cuffs never came out. Instead, the crowd got a police escort up Pennsylvania Avenue and past the Trump International Hotel, where the crowd roared into cries of "shame, shame, shame."

After more than a mile, Fonda was walking faster than the crowd. The banner she was walking behind bulged as she outpaced the others holding it.

Walking next to them was a single counterprotester, Patrick Walsh. He’d been there the previous week, too, wearing black sweatpants, a black sweatshirt and a "Make America Great Again" hat, and livestreaming the event by carrying a webcam in one hand and his laptop in the other.

"Are they locking up Hanoi Jane, or what?" he shouted, one eye on his laptop screen. He kept shouting, sometimes about the Green New Deal bringing the new world order, but mostly about Fonda’s past activism.

A week earlier, as she was marching from her Capitol rally, Fonda passed by a white-goateed man in a Harley-Davidson hat who looked down at her from a ledge: "Bitch."

Among some people, Fonda remains most famous for her 1972 trip to North Vietnam, where she was photographed sitting in an anti-aircraft gun. Before that, she had been arrested trying to hand out anti-war leaflets on a U.S. military base.

She has apologized, but anti-militarism remains a major part of her political identity. At a recent rally, she linked the last two decades of war to U.S. dependence on foreign oil.

"Al-Qaida bombed the U.S. on 9/11 because U.S. troops had been stationed in their countries for decades, mostly to guard oil — including on some of their sacred sites. And this caused lethal resentments and prompted the attacks on that September [day]," she said at the rally, repeating a point she had made the previous night at her teach-in.

Fonda’s fire-breathing is paired with sensitivity about being a wealthy, white grandmother taking leadership in a movement that skews young, non-white and low-income.

She’s begun rallies by acknowledging their presence on stolen indigenous land. She offers brief remarks before stepping aside for others — an anti-pipeline activist who’s a black mother, a young Hispanic organizer who uses they/them pronouns, an anti-war veteran who’s a member of the Oglala Lakota and Northern Cheyenne tribes.

Fonda gets back up to adjust the mic or introduce the next speaker, then she usually sits down in the crowd. During one speech, a gray-haired man wearing a shirt that read, "Canadians are Fonda human rights," leaned down to talk into Fonda’s ear. She shushed him with a finger to her lips.

The plan is for Fonda to keep demonstrating weekly until January, when she’s to return to filming. With about halfway to go, there are some signs that the work is wearing on her. The longtime activist knows this is her last fight.

After her 2-mile march to the White House, Fonda and others staged a sit-in at one of the security checkpoints. As some of the other activists were eating Ben and Jerry’s ice cream, Fonda stood up.

She had spent the previous Friday night in jail, a stay so unpleasant that it made her bones hurt, she told a Washington Post reporter. Now, she was walking away from the risk of experiencing that again, at least for another week.

Trailed by a clutch of reporters, she kept her head locked forward and ducked into an idling car, a black Lincoln MKT (typical miles per gallon in the city: 16). The door closed, leaving one of her organizers on the sidewalk to face the press.

"I think a night in jail, on central cell block, is hard on anyone. When you’re 82 years old [sic], and it’s cold, and there’s cockroaches running around, and there’s terrible food, you’re seeing the oppression — it’s hard on anybody," the organizer said.

"Jane has been out here all day on a long march. She’s one of many people, and she wants you to tell the story of all the people, not just Jane."