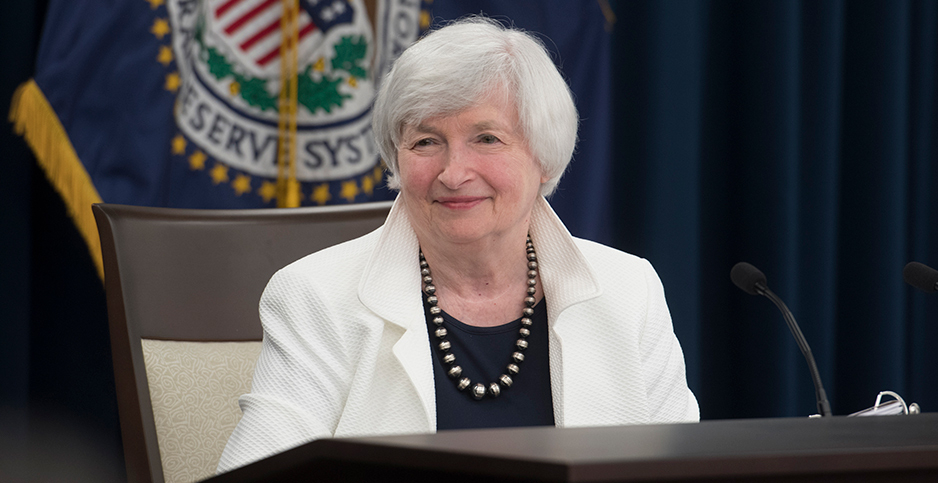 President-elect Joe Biden’s pick to lead the Treasury Department has committed to fighting climate change and the threats it poses to the U.S. economy in her new role.

But former Federal Reserve Chair Janet Yellen’s recently released financial disclosures, which were posted on New Year’s Eve, show she owns stocks in the fossil fuel and chemical industries — and that she has made millions of dollars in speaking fees from corporations and financial firms, including those that contribute to global warming.

According to the disclosures, Yellen holds at least $45,000 — and as much as $150,000 — of investments in ConocoPhillips, Phillips 66 Co. and DuPont. Yellen, whose nomination was praised by progressives and green groups, made between $3,700 and $8,500 from her investments in those three companies since January of 2019, according to the U.S. Office of Government Ethics.

Biden’s choice for Treasury secretary also holds at least $2,000 of investments in Chemours Co., Dow Inc. and Dow Dupont, which together drove between $400 and $2,200 in income from dividends over the reporting period.

Yellen has also invested between $100,000 and $250,000 in Norfolk Southern Corp., a freight rail company that transports coal.

Last week, the nominee said she would divest from those companies, among others, within 90 days of confirmation to minimize any potential conflicts of interest. Prior to her divestment, Yellen said she wouldn’t "participate personally and substantially in any particular matter that to my knowledge has a direct and predictable effect on the financial interests of that entity" without first obtaining a written waiver to do so.

The disclosures have sparked some concern from progressives about Yellen’s ties to Wall Street giants and other companies that, as the Treasury Department’s chief, she would oversee.

Jeff Hauser, for instance, who heads the Revolving Door Project, a liberal group that scrutinizes political appointees’ corporate connections, noted that Yellen’s fossil fuel holdings and speaking engagements raise ethical questions that should be asked during her Senate confirmation hearings.

He said it’s important that Yellen makes available the contents of the speeches she was paid to deliver and that she provides additional background regarding when and why she invested in fossil fuels.

But Hauser doesn’t necessarily think the disclosures automatically raise major red flags about Yellen’s ability to do her job fairly.

"My guess is that this is not a deep-seated commitment to the fossil fuel economy," Hauser said, noting that it’s difficult to be sure how closely she monitors her own investments or if she relies on an adviser. Nonetheless, he added, "it’s a decision she made, so she should answer questions about it."

Regarding the speaking fees, which include a $292,500 payment from investment company Citadel in October of 2019, Hauser said the main cause for concern would be if Yellen had provided private companies with financial advice based on knowledge she gained during her time as a public servant, as the head of the U.S. central bank.

"If it turns out Yellen did that, that’s really bad," he said. "But that’s not typically what paid speeches are about."

It’s more likely, he said, Yellen was paid handsomely to talk about her experience as Fed chair and the general state of the economy, which Hauser doesn’t see as a major issue.

"We’d like to have that assumption confirmed or rejected," he said. "Generally these speeches are more boondoggle than meaningful, but we don’t know what we don’t know. We want to see the speeches."

Biden transition spokesperson Sean Savett said in an email that most of Yellen’s speaking engagements did not entail "prepared remarks." Rather, he said, Yellen largely participated in "armchair conversations where she answered questions from a moderator, some of whom were reporters. A number of those events were public and many were covered by the press at the time. She has already signed ethics agreements governing her relationship with these entities and she will of course abide by all appropriate recusals."

Yellen’s disclosures come at a time when progressives and environmentalists are urging the financial sector and incoming administration to throw their weight behind existing efforts to shift the global economy away from fossil energy and the mounting risks posed by planet-warming industries.

Sources say that Yellen — who has long championed a carbon tax and as Treasury secretary could push financial regulators to act on climate risk — will be integral to achieving that goal (Climatewire, Nov. 25, 2020).