Japan is building planes. Think less fuel, like its cars 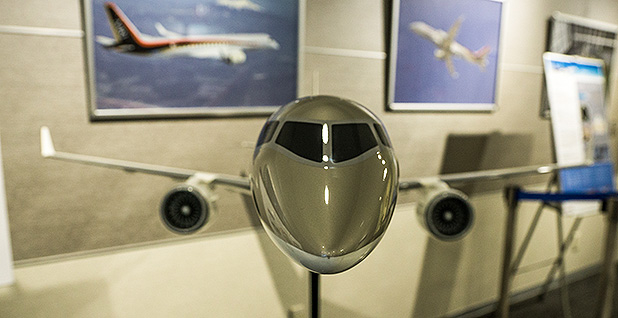 A model of Mitsubishi's new regional jet in its offices in Nagoya, Japan. The aircraft boasts the highest fuel efficiency and the lowest pollution of its class. Photo by Umair Irfan.

NAGOYA, Japan — The first airliner designed and built in Japan in more than 40 years took off for the first time here in late 2015 before hundreds of onlookers, lifted by promises of going farther with less fuel.

The Mitsubishi Regional Jet (MRJ) family of aircraft, with between 70 and 100 seats, promises the highest fuel efficiency and the lowest pollution compared with its competitors in the booming regional jet market.

The first few aircraft are currently undergoing testing in the United States.

Rather than going bigger or faster, MRJ puts the airline industry on a cleaner path with less greenhouse gas emissions. And for Japan, it’s a resurgence of monozukuri, the tradition of continuous improvement in manufacturing, and a chance to stamp "Made in Japan" on a prestigious product from the world’s third-largest economy.

"We want to create a new industry as well as a new product," said Hideyuki Kamiya, head of marketing for Mitsubishi Aircraft Corp. "Also for me, it would be very enjoyable if we see good Japanese technology spread all over the world through regional jet airplanes."

But the question is whether it will land.

Pitching a new airliner on its clean bona fides, especially one from a novice manufacturer, can only go so far when fuel prices are low and airlines are contending with other factors like mergers, shifting regulations and mounting competition.

Plane builders like Airbus SAS and Boeing Co. have already placed big bets on greater fuel efficiency with their respective A350 and 787 airliners. Mitsubishi, along with the Japanese government, is hoping MRJ can do for the regional jet market what the larger aircraft are doing for international travel, and create a new tool in the fight against global climate change.

The Japanese government has already furnished one-third of the development costs of the aircraft, to the tune of $1.5 billion, according to The New York Times. That number is poised to rise as the company earlier this year pushed the launch back, from 2018 to 2020.

The government’s support for MRJ is part of Prime Minister Shinzo Abe’s strategy to boost Japan as a technology exporter, playing to the nation’s strengths in high technology and energy efficiency.

Kamiya explained that the aircraft was designed from the ground up with efficiency in mind, an approach that yielded greater improvements than could be found by simply retrofitting an existing aircraft.

In MRJ, efficiency starts with the engines.

It uses two Pratt & Whitney turbofan engines that have a novel gearing mechanism. In a conventional turbofan jet engine, the main fan in front spins at the same speed as the compressor blades in the middle of the nacelle.

A geared turbofan uses a mechanism that allows the main fan blades to spin slower than the compressor. When the main fans of conventional engines spin too fast, the edges of the blades approach the speed of sound, creating instabilities that add drag and increase fuel consumption.

The propagating efficiency tactics add up to an aircraft that costs 20 percent less to operate than its competitors while cutting noise by 40 percent and beating new pollutant standards. Lower noise can save airlines money because some airports have higher landing charges for louder aircraft and impose noise curfews.

Some versions of the aircraft have a range topping 2,300 miles, enough to cover all regional networks in the world.

Inside the cabin, MRJ uses light-emitting diodes to illuminate the tallest and widest cabin in its class, with larger overhead bins than its competitors and no middle seat.

Greater fuel efficiency stands to be an important strategy for some airlines. "Even with low fuel prices, the best natural hedge any airline can have is to operate the most fuel-efficient fleet possible," said Robert Mann, a former U.S. airline executive now working as a consultant.

Mitsubishi has reported more than 200 orders for the aircraft, with Japan’s All Nippon Airways as its launch customer. Fuel can add up to 30 percent of an airline’s operating expenses.

However, there are many other variables at play when it comes to reducing the environmental impact of the aviation sector, and buying more efficient aircraft only solves part of the problem.

An airline’s fickle finances are often the biggest factor in whether it will invest in new aircraft. Adding more seats to divide fuel costs among more passengers is already a tried-and-true tactic for many airlines.

"It’s a complicated equation, and a lot of factors contribute to the cost," said Ahmed Abdelghany, an associate professor of operations management at Embry-Riddle Aeronautical University.

Nonetheless, airliners remain an important front in the fight against climate change.

Globally, the aviation sector accounts for 2 percent of humanity’s greenhouse gas emissions, amounting to 781 million metric tons of carbon dioxide to transport 3.57 billion people in 2015, according to the Air Transport Action Group.

Aircraft designers have made vast strides in making aircraft more fuel-efficient, but they are running up against the physical limits of the technology, and there are no alternatives to liquid hydrocarbon fuels for journeys through the sky across oceans.

At the same time, passenger demand for aviation is poised to double over the next 20 years, according to the International Air Transport Association (IATA).

"The overall emissions are rising even though the emissions per passenger have been cut," said Chris Goater, a spokesman for IATA.

Japan’s re-entry into commercial aviation with a green jet is coming at an opportune time, and Mitsubishi may have a regional advantage.

He added that the aviation industry is aiming to cut its net carbon dioxide emissions in half compared with 2005 levels by 2050. Those improvements will have to come from offsets and eventually from carbon-neutral biofuels.

The governing body of international air travel, the International Civil Aviation Organization, approved a program to offset emissions from air travel with a goal of carbon-neutral growth in the industry after 2020 (E&E News PM, Oct. 6, 2016).

Mitsubishi is now eyeing the next phase of development and figuring out where it wants to go with MRJ.

"We still have not decided yet," said Mitsubishi’s Kamiya, who added that the company is looking into stretched versions of MRJ to seat more passengers.

But the company knows that other manufacturers are also providing more efficient aircraft, so MRJ buyers won’t be content resting on the aircraft’s laurels.

"Making the product is not the whole thing. To support the customers is very important," Kamiya said. "After delivering the airplanes, we want to continuously enhance this product."

Correction: A previous version of this story misspelled the name of professor Ahmed Abdelghany.