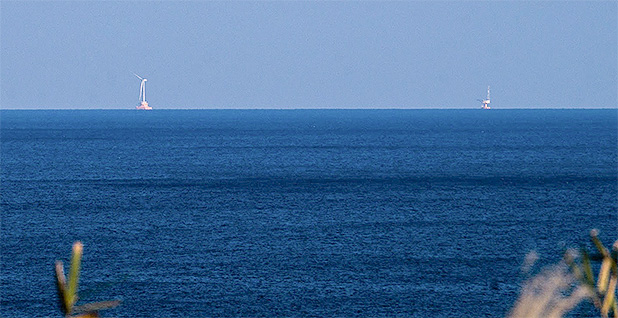 FUKUSHIMA, Japan — The rumbling brown turbine on the bank of the gurgling Arakawa River is one of many different engines powering the recovery of the Fukushima region.

Here, in the idyllic hills in southwest Fukushima city, is Tsuchiyu Onsen, a traditional hot spring resort nestled in a wooded national park. The relaxing hot mineral water pools are said to have benefits for health.

The people here want to show that the hot springs, known as onsen, also have benefits for the environment. They say countries, many of them smarting from President Trump’s announcement he will withdraw the United States from the Paris climate accord, should take notice.

"Not buying coal and petrol from other countries and using geothermal effectively, that is one of the things that I think is Japan’s role in the world," said Takuma Oguri, an engineer at Tsuchiyu Onsen Energy Co. Ltd.

As tourism dried up after the 2011 accident at the Fukushima Daiichi nuclear power plant 75 miles away, officials at the onsen decided to put the hot spring water to work.

Through wisps of acrid vapor, the binary geothermal generator draws on wells dug 3 kilometers deep to provides 400 kilowatts of renewable electricity to the resort and neighboring region. The residual water from the plant supports a shrimp aquaculture project.

The $5 million project has become a draw for tourists around Japan, but officials here have a global message that Japanese technology and ingenuity could help nations cut greenhouse gas emissions.

"Showing successful examples of clean technology all over Japan can convey this message to the world," Oguri said.

Officials are aiming to distance the region from the stigma of its namesake nuclear disaster and want to draw solely on wind, hydro, solar and geothermal energy. The prefecture acquired 27.3 percent of its energy from renewable sources this year.

The country as a whole is trying to reinvent itself at a major technology exporter, with the energy as a key component of its role in mitigating global climate change, and Japanese officials are jockeying for attention from the United States.

Japanese Prime Minister Shinzo Abe was the first world leader to meet with Trump after he won the 2016 presidential election. The leaders met again at the White House in February and crossed paths ahead of the Group of Seven summit in Italy.

While concerns about North Korea likely dominated the discussions, trade loomed over the talks since the collapse of the Trans-Pacific Partnership, a free-trade agreement that Abe championed and Trump despised.

Japan, the world’s third largest economy, is an important trading partner for the United States.

In 2016, the United States exported $107.9 billion worth of goods and services to Japan, making Japan the fourth largest export market for the United States, according to the U.S. Trade Representative.

Trade is a big part of Abe’s strategy to deal with domestic financial trouble and energy concerns, since Japan needs export markets and its economy depends on energy imports.

Over the past five years, the Japanese economy has lost $2 trillion in gross domestic product, and its population has declined by 1 million people. Its national debt is more than double the size of its economy.

"Japan’s really going to be a technology exporter, and that’s what we should expect from it," said Llewelyn Hughes, a senior lecturer at the Crawford School of Public Policy at Australian National University who studies energy and environmental issues in Japan.

At the same time, Japan is angling for more U.S. natural gas. In February, Abe pitched to Trump a $450 billion infrastructure investment plan that would include U.S. energy export facilities.

"I could see energy exports to Japan as part of a solution for the Trump administration to reduce the trade deficit," said Jane Nakano, a senior fellow in the Energy and National Security Program at the Center for Strategic and International Studies. "[The Japanese] are still trying to push for a global LNG market."

But there are still some awkward discussions looming for Japan and the United States.

U.S. Energy Secretary Rick Perry arrived last week in Japan, a country whose ancestral capital Kyoto was once synonymous with international climate change efforts, just as Trump announced that the United States would withdraw from the Paris Agreement.

Though Perry previously said he counseled the president to stay within the agreement, in a press release last week, he said he supported the exit.

"President Trump’s decision will prove to be the right course of action and one I fully support," Perry said.

Perry visited the wounded Fukushima Daiichi nuclear power plant over the weekend and will be heading to Beijing this week for the eighth Clean Energy Ministerial and the second ministerial for Mission Innovation, an agreement among 22 countries and the European Union to double clean energy research and development funding by 2020.

Japan was one of the launch members of Mission Innovation, and Abe shared the stage with President Obama in Paris when the initiative was announced.

Budget proposals for DOE show drastic cuts to energy research, and the concern is that other countries may back off of their commitments if the United States fails to uphold its end of the deal.

Meanwhile, Japan has proposed a climate change target that some activists have criticized as too weak, and the United States’ withdrawal from the Paris Agreement means there might not be much incentive to ramp it up. The country aims to cut its greenhouse gas emissions 26 percent below 2013 levels by 2030.

"The goal is rather conservative, but we’re trying very hard," said Yoshiro Owadano, director general of the Fukushima Renewable Energy Institute. "We have to be proud of that."

The institute, launched in 2014, employs 2,300 scientists and has a budget of $900 million per year. The researchers are working to reduce the cost of renewable energy and spur the development of industry in the Fukushima region.

Owadano said the technology developed at the institute, from hydrogen storage to microgrid systems, is aimed at making Japan, a country that imports close to 90 percent of its fuel, energy independent.

"Our goal is to see our technologies used in the real-life society," said Owadano.

But he noted that the push for economic nationalism could undermine progress on shared environmental goals, ultimately harming everyone involved.

"If the country is wise enough, they know that you cannot be alone for a long time," he said. "We are connected, whether you like it or not. We are on the same ship."