Japan thinks hydrogen will rule. Does anyone else? 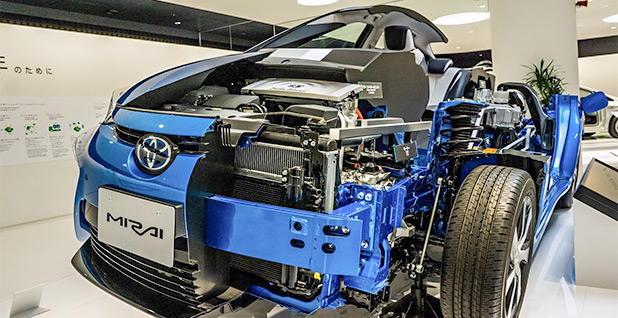 A cutaway view of the hydrogen-fueled Toyota Mirai on display at Toyota headquarters in Japan. Photo by Umair Irfan.

TOYOTA, Japan — It’s eerily silent, and only the digital speedometer seems to notice that the car is picking up speed.

Chief Engineer Yoshikazu Tanaka explains with his eyes on the curving road ahead that this is a feature, not a bug, in the Toyota Mirai. Acoustic laminated glass blocks out sound as the sedan glides over the road here in Japan’s industrial heartland.

Not that there is much noise to begin with. In a fuel-cell-powered car like the Mirai, the wheels turn at the behest of a purring direct-drive 113-kilowatt electric motor, drawing power from a silent fuel cell stack beneath the floor that sips hydrogen from a high-pressure carbon-fiber-composite tank under the back seat.

"The response is quick, and the acceleration is smooth," Tanaka says as he floors the gas pedal and the car jets forward.

The name Mirai means "future," a whisper of what Toyota thinks the world will look like in years to come. The rest of the world is listening, but skeptical.

The company is pitching the car as one that goes beyond its clean credentials, an efficient set of wheels that impresses your parents with specs like a low center of gravity, even weight distribution, sharp cornering and quick pickup that impresses your friends.

Toyota and some other automakers like Hyundai and Honda are betting that hydrogen will fuel a big chunk of transportation in the coming decades as the pressure for cleaner vehicles mounts. Not just cars, but buses, trucks and household fuel cells.

And Japan, the world’s third largest automaker, is planning to lead by example.

"Hydrogen energy is an ace in the hole for energy security and measures against global warming," said Japanese Prime Minister Shinzo Abe in January. "Thanks to deregulation, a hydrogen society of the future is about to begin here in Japan."

How to be clean but also cool

Last year, Japan’s Ministry of Economy, Trade and Industry set a target of 40,000 hydrogen fuel-cell vehicles on its roads and 160 fueling stations by 2020, just in time for the Summer Olympics in Tokyo, which will be a showcase for Japan’s hydrogen prowess as athletes shuttle to venues on fuel-cell-powered buses and cars.

The city of Tokyo is planning to spend more than $400 million in subsidies for fuel cell vehicles and fueling stations ahead of the games.

"This is one of the technologies with which we can show our strength in this field," says Eiji Ohira, director of the fuel cell and hydrogen group in the new energy technology department at NEDO, Japan’s largest public research, development and deployment agency.

But there’s a lot that needs to happen between now and then.

Just over 1,300 fuel cell vehicles and only 80 hydrogen stations are running today in Japan. That means there needs to be a massive increase in hydrogen cars sales and the infrastructure that goes with it: hydrogen production facilities, pipelines and fueling stations.

At the same time, competitors like battery-electric cars are ramping up in production and dropping in price, so for fuel cell cars to take off, clean cannot be their only selling point. They have to be comfortable, affordable and cool.

"The hydrogen system cannot offer any drawbacks," Toyota’s Tanaka says. "It has to stand on its own."

Over the past decade, engineers have worked to close the gap between fuel-cell-powered cars and their competitors.

A fuel cell converts chemical energy into electricity. The typical design uses a catalyst at the anode to split hydrogen gas into its constituent electrons and protons. The electrons generate a current, while the protons pass through a membrane and react with oxygen at the cathode, producing water.

Early fuel cell designs required large amounts of platinum, an expensive precious metal, and they wore out quickly. Newer versions use a tiny fraction of the platinum and have made the cells last as long as the car.

In addition, hydrogen is not a fuel in and of itself; it requires processing another feedstock, whether that’s splitting water with electrolysis or steam reforming methane. These processes require an energy input, which is why engineers often describe hydrogen as an energy carrier rather than a fuel, a middleman between the car and the energy source.

Balancing the energy required to produce hydrogen and delivering it at a competitive price remains a massive technical and financial challenge.

Meanwhile, battery-electric cars can top up anywhere there is electricity. Some can use standard wall outlets, and Japan already has more dedicated electric car charging points than gasoline stations.

This is why Tesla CEO Elon Musk described using hydrogen as an automotive fuel as "incredibly dumb."

The difficulty begins with hydrogen itself. The molecule of hydrogen gas is small, leaking readily and reacting enthusiastically. This requires novel materials that can safely store and move hydrogen under high pressure without creating a miniature Hindenburg.

This is especially challenging for Japan, a crowded island nation with little land area left for development. Many rules govern gas pipelines and tankers, and the rules here are more stringent than in many other parts of the world. Hydrogen tanks have to be kept a minimum distance from neighborhoods, and hydrogen pipelines need thicker insulation in Japan than in other countries, for example.

Then there’s the testing, verification and monitoring needed for all this infrastructure.

"We have a lot of regulations," says Shun Toyoyama, the communications department manager at Air Liquide, a company building hydrogen fueling stations in Japan. "We cannot enjoy the same dynamism as the United States."

Air Liquide has 80 hydrogen fueling stations under construction around the world and is building its fifth and sixth stations in Japan. At the same time, the government is dialing back what it describes as outdated and onerous regulations around hydrogen.

Company officials say they have a long history of working with hydrogen as an industrial gas for steel production and chemicals manufacturing. Fuel cells are piggybacking on this apparatus.

At the moment, the company is steam reforming methane to produce its hydrogen and delivering it as a gas. The company wants to move toward liquid hydrogen delivery and is exploring ways to generate hydrogen from renewable sources, like using solar power to split water.

With all these hurdles, why is Japan still so interested in building a hydrogen economy?

Chicken and egg vs. flowers and bees

A big part of the answer is that the shift toward hydrogen plays to Japan’s strengths as a technology developer and exporter, and the country makes an ideal laboratory to test the hydrogen economy.

The country spends more than $100 billion on foreign oil every year, and fuel prices tend to be high, so hydrogen fuel doesn’t have to be as cheap as it does in other countries to compete. More than 93 percent of Japan’s population is concentrated in urban areas, so fewer fueling stations are needed to sustain a hydrogen fleet than among populations that are more spread out.

For drivers, a fuel cell fill-up takes only a few minutes, compared with hours of charging for a battery-electric vehicle.

Another factor is that much of the supply chain for the hydrogen economy is domestic, and Japanese companies like Toyota have a track record of bringing fuel-efficient cars to the masses.

In particular, Toyota has built the Prius, a mass-market hybrid gasoline-electric car that has dominated the segment for more than 20 years. It took 10 years to sell the first million units, then two years to sell the second million.

With patience and know-how, Toyota hopes to replicate some of that success in fuel cells in Japan and in other parts of the world where energy prices, environmental concerns and driving styles align to make fuel-cell-powered cars a preferable option.

The Japanese central government is also providing generous subsidies to the hydrogen sector. The fuel price is subsidized to come in below $10 per kilogram, so filling up the Mirai costs about $50.

The government is also offering a subsidy of more than $17,000 for buying a fuel cell car, with some cities like Tokyo offering additional incentives that in total knock close to $20,000 off the car’s sticker price.

These subsidies won’t last forever, so the industry has its work cut out for itself in driving down costs. And with a national debt that is more than double the gross domestic product, the Japanese government’s hydrogen Hail Mary has a lot riding on it.

As hydrogen grows as a fuel source, the automakers and the fueling station builders are keeping a close eye on each other.

"We are communicating with [car companies] every two weeks and checking what points and issues we have," says Air Liquide’s Nasu.

After all, few people will buy a car without a place to fill it up, and no one wants to invest in a gas station without customers, so both sides are trying to avoid a chicken-or-egg scenario that leaves one group out in the lurch.

"We would prefer to be like flowers and bees," says Taiyo Kawai, project general manager at Toyota’s R&D and Engineering Management Division.

The future of the automotive industry in Japan and around the world is still anyone’s guess, and other parallel developments in driving like automation and car sharing could still change the picture, Kawai says.

As such, even in a hydrogen society, there will likely still be a place for battery-electric vehicles and other approaches to transportation and energy.

Quickly and silently, the hydrogen industry is accelerating, and Japan is maintaining a firm grip on the wheel, but there is still a lot of road ahead before anyone can win the race.