Jerry Brown talks tough, but can he stop Trump on climate? 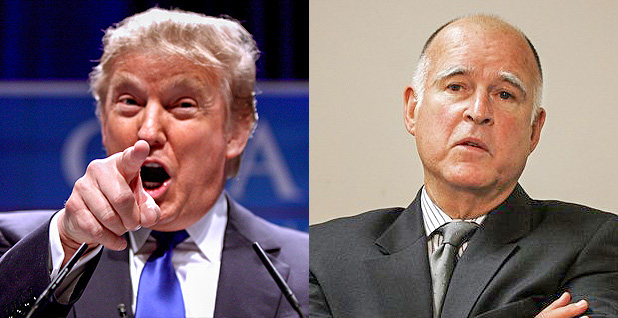 Positioning the Golden State as the country’s liberal champion, Brown noted that California has triumphed before on green issues, like pushing for the nation’s toughest restrictions on vehicle emissions. The state’s tailpipe pollution rule later became the national one in an agreement certified during the Obama administration.

California, he said in multiple appearances, will continue to hold the line on climate change for the nation.

"A lot of people say, ‘What the hell are you doing, Brown? You’re not a country,’" Brown said at the American Geophysical Union conference in San Francisco. "Well … we’re the fifth- or sixth-largest economy in the world, and we’ve got a lot of firepower. We’ve got the scientists. We’ve got the universities. We’ve got the national labs, and we’ve got the political clout and sophistication for the battle, and we will persevere.

"Whatever Washington thinks they’re doing, California is the future," he added.

Brown and other California leaders are girding themselves for battle on issues where they anticipate collision with Trump. The president-elect, who has called climate change a "hoax," has nominated Cabinet members who question or reject established climate science. They include Oklahoma Attorney General Scott Pruitt (R) to head U.S. EPA. Pruitt is a prominent foe of the Obama administration’s Clean Power Plan, which sought to limit carbon pollution from existing power plants. Trump also has threatened to pull the United States out of the international agreement to keep warming to 2 degrees Celsius, negotiated at the U.N. conference in Paris last year.

Brown and California — alone or joining with other states — can wield clout against the Trump administration on some fronts, experts said. There are other areas where Brown will hit limitations.

Brown, now in his fourth term and increasingly blunt in his speeches, also can use the bully pulpit to fight Trump and conservatives, Elkind said. California is the nation’s most populous state.

"Governor-wise, you can really marshal some of the political forces in Congress and outside interest groups and get them focused on a coordinated plan to uphold California’s ability to do a lot of the clean air, clean water priorities that we have," Elkind said.

Many see California and other liberal states like New York as likely to file lawsuits to stop the Trump administration from weakening federal rules on climate and other environmental fronts. The Golden State would play a role similar — though opposite politically — to that of Texas or Oklahoma, which challenged the Obama administration’s actions. In Oklahoma, those came with Pruitt as state attorney general.

"There is a movement now among some of the more progressive states to use the courts to some extent for those kind of purposes … to stopping the watering-down of regulations," said Deborah Sivas, professor of environmental law at Stanford University. "They’re going to kind of peel a page out of that playbook."

Brown hasn’t given specifics on what actions he’ll take once Trump is president but last week told reporters that on climate, "I’m not waiting for what Washington may or may not do; I’m doing whatever I can through the resources of California and any other state or province or country that will join with us."

One of the places where California could feel pushback from the federal government is on those vehicle emission standards that Brown mentioned at the AGU conference. The tailpipe rule is part of the federal corporate average fuel economy, or CAFE, rule. President Obama in 2009 announced a settlement among EPA, automakers and California that largely raised the federal rule to California’s level.

CAFE is expected to bring the fleetwide fuel economy to more than 50 mpg in 2025. It included a midterm review that originally was scheduled for completion in mid-2017. But Obama’s EPA made a surprise proposal earlier this month to maintain increasingly strict fuel economy standards from 2022 to 2025.

In a memo sent to the Trump transition team last month, Alliance of Automobile Manufacturers President and CEO Mitch Bainwol called on Trump to "adjust" CAFE and listed several policy recommendations. Trump could look to reverse the Obama EPA’s determination. If a change is attempted by the Trump EPA, California could sue to block any proposed rule.

If Trump sought to get CAFE weakened through legislation, California instead would need to aim to mount public opposition. It would likely mean going up against automakers and possibly oil companies, which Brown has done before.

"We would need a congressional strategy to try to block that from happening, try to rally public opinion, try to stop from happening," said Elkind with UC Berkeley.

EPA’s endangerment finding in Obama’s second year in office became the basis for the agency’s move on the Clean Power Plan to regulate emissions from existing power plants. Congress may attempt to roll back the endangerment finding with an amendment to the Clean Air Act, or Trump’s EPA could try to do it administratively.

"I think Brown would want to lead the challenge very aggressively" on opposing that, Sivas said.

However, if the Trump administration were to simply stop federal action on limiting greenhouse gases, "there’s a limit in my opinion what the Brown administration can do," said Rick Frank, director of the California Environmental Law and Policy Center at UC Davis.

The Clean Air Act, written in 1973, doesn’t contain anything explicit on greenhouse gases that would require EPA to do something specific within a certain time, he said.

"The court can’t and won’t direct them to set the public health standard at this or that level," Frank said. "The federal administration under long-standing principles of administrative law has a great deal of discretion as to what environmental standards it sets."

Restrictions on acting as a nation

California can serve as a bulwark for weakened environmental protections over the next four years, experts said. Frank said he believes the Endangered Species Act, which creates protections for imperiled creatures, is one of the rules most at risk in the Trump administration.

California additionally could sue and argue that Trump’s administration must consider a listing for a particular creature, he said.

But Brown needs to be careful not to overreach as a state on climate and other issues, experts said. The Supreme Court has slapped down California for trying to exert too much power.

In a case related to insurance and Holocaust victims’ families, the court in 2003 told California it couldn’t refuse to do business with companies unwilling to release policy information. The court sided with plaintiff the American Insurance Association, saying that California had exceeded its authority.

"There’s a clear law that says that only the federal executive branch gets to conduct foreign affairs," said Michael Wara, associate professor at Stanford Law School. "If a state is proceeding in a way that would appear to take a different course than the federal government on the issue of foreign affairs, the courts in the past have been willing to step in and stop the states."

Brown has made alliances on climate with subnational governments, but most of those involve voluntary pacts. The state as it acts on climate would need to continue that pattern.

One gray area for California is agreements on its cap-and-trade program for carbon emissions, Wara said. California and Quebec hold joint auctions for allowances covering greenhouse gas emissions. California is looking to join with Ontario and possibly others.

"It’s pretty hard to operate a market jointly without at least committing to a few things in a binding way," Wara said. It hasn’t been an issue for long, he said, because "the Obama administration has been pretty supportive of those moves."

"But it’s untested," Wara said, and is an area of risk under Trump.

In some ways, Trump’s election could help California on the climate front, Wara said. California in the past has approved some of its most far-reaching policies with an adversary in the White House. Those include climate law A.B. 32, precursor legislation to regulate greenhouse gas emissions from cars and a rule that forces utilities to make one-third of their electricity from renewable sources by 2020. Those all happened under the George W. Bush administration.

"When California looked at Washington and said Washington, D.C., doesn’t believe in any of this stuff, and we are going to the city on the hill, that perspective is very appealing to California," Wara said. "We like to think we’re exceptional."

Brown wants to pass as law an extension of cap and trade beyond 2020, and do it with a two-thirds margin. The California Chamber of Commerce and others have filed suit to stop cap and trade, arguing that the auctions for greenhouse gas allowances are a tax that needed a two-thirds vote under state law. It also contends the California Air Resources Board lacks the authority to hold the auctions. That case is pending.

The election saw Democrats win a two-thirds "supermajority" in both sides of the Legislature, but Brown has said that doesn’t mean they all agree on issues, and it won’t guarantee a two-thirds vote.

"That is a heavy lift for the Legislature," Wara said of the two-thirds vote on cap and trade. "I think the odds of achieving that went up when Trump won.

"It’s not going to be easy, still, but it’s going to be much more feasible with the sense that Washington, D.C., is hostile to climate, and California as a progressive state has to set the example," Wara said.