Jewell explains decisions on Bundy, looks ahead to Trump 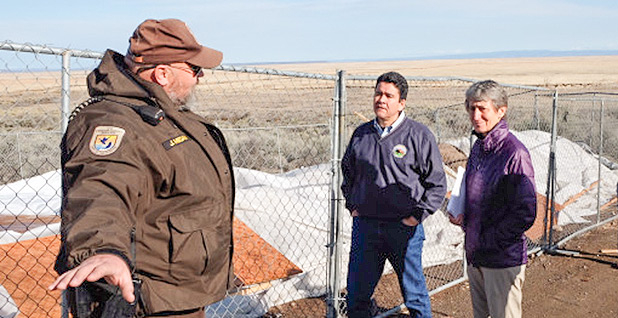 Interior Secretary Sally Jewell, right, and Deputy Secretary Mike Connor take a tour of the Malheur National Wildlife Refuge in March after the 41-day armed standoff ended. Photo courtesy of the Department of the Interior.

Interior Secretary Sally Jewell said this week that armed standoffs with "fringe" groups protesting federal land management led to the most "extraordinarily difficult" moments of her four years at the helm of the agency.

In a wide-ranging podcast interview with Outside Magazine, Jewell said the 2014 event at the Bundy family ranch in Nevada and last winter’s Malheur National Wildlife Refuge occupation in Oregon led to sleepless nights.

Jewell said she agonized over what to do during the 2014 standoff over rancher Cliven Bundy’s failure to pay fees for grazing on public lands. After an "almost all-nighter," Jewell said, she made the "very difficult — but I think the right decision — to pull our people out of harm’s way, so that blood was not spilt."

"That was very difficult to do because we had court orders for Bundy to remove his cattle," she said.

Federal officials faced significant criticism for that decision, with many arguing that it emboldened Bundy and his supporters and directly led to the Malheur refuge standoff last winter.

Jewell said she was "involved every single day" during the 41-day Malheur occupation that ended Feb. 11.

She insisted that the event, led by Cliven’s sons Ammon and Ryan Bundy, consisted of a "very small fringe group of people."

And, she said, they failed to meet their objective because they "did not reflect the values of the people of that community," which had a good working relationship with federal land management officials, including at the refuge.

"The underlying story," she said, "is that this was a small group of people that did not gain the support of the community because the land management agency — in this case, the Malheur National Wildlife Refuge — had been working for over a decade with members of the community on the plans for the refuge for the long term."

Jewell said that is a recipe for avoiding other similar conflicts in the future.

Federal officials, she said, should work to establish "trusting, personal relationships with individuals in those communities at every level of government."

Jewell also sought to rebuff a movement in the West, seeking to transfer federal lands to state or local control, that the Bundys are part of.

The former CEO of REI said local officials understand the complexities of land management in the West, as well as the strain such a takeover would put on already tight state budgets.

"When we engage with local communities and they recognize what federal land management looks like and what we do, that actually changes," she said. "So part of it is on us to communicate with the local people and local elected officials about what we do."

If states had control, they would likely either need to raise revenue through taxes to manage the land, or sell it off.

"If people actually opened their eyes and understood it, they would appreciate that, as well," she said.

Jewell also mentioned a conversation she had with an unnamed Republican governor from a Western state. The governor, she said, told her he didn’t want federal lands transferred to his state because of the enormous management expenses.

Jewell also expressed some optimism that some of the policies implemented during her four-year tenure would survive Republican President-elect Donald Trump’s administration.

She pointed specifically to sweeping greater sage grouse conservation plans covering 67 million acres in 10 Western states that will affect how grazing and development can be carried out.

"That’s not going to get rolled back," Jewell said. That policy is "common sense, and it’s pragmatic."

She also highlighted a plan for 10 million acres of California desert that identified which areas are suitable for wind and solar energy development, and which aren’t.

"I’m optimistic that we’ve crafted a future that makes sense for business and what it make sense for business," she said. "I don’t see it being in the best interest of politicians or Cabinet members to unwind that."

Jewell did express concern about climate change, and a hope that whoever has her job next will embrace her team’s work on the issue.

She also implored environmental groups to be vocal during the Trump administration.

Asked what’s next for her after Trump takes office in January, Jewell said she plans to take a long road trip across the country with her husband back to her native Washington.

Choking back tears, Jewell said they had recently traded in their Toyota Prius for a Subaru Outback to get more ground clearance for exploring.

She said she needs to "rebalance" after the rigors of leading the Interior Department.

"Balance for me and for most of us," she said, "comes from Mother Nature."