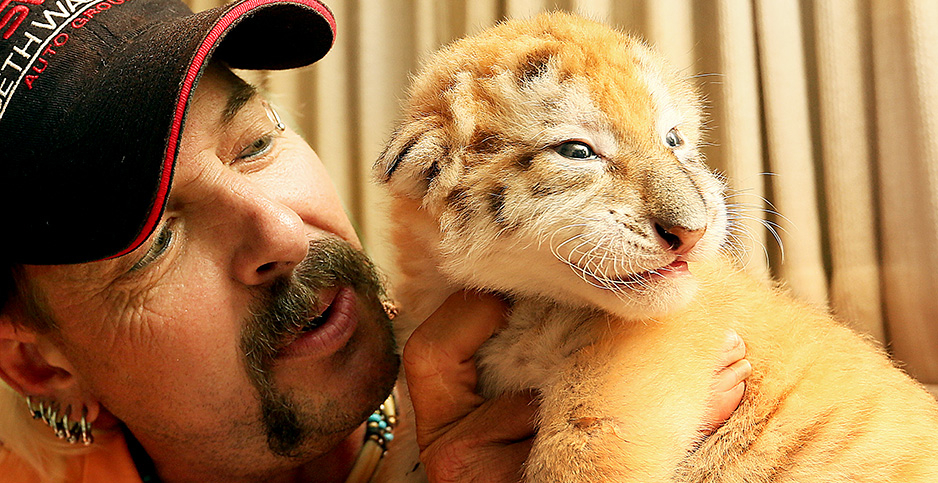 Joseph Maldonado-Passage, known as Joe Exotic, with one of his tigers. Jeff Cook/Zuma Press/Newscom

"Joe Exotic" is fighting back against the Fish and Wildlife Service, this time from behind bars.

The flamboyant former roadside zoo owner formally known as Joseph Maldonado-Passage is suing the federal agency, even as he embarks on a 22-year prison sentence following his conviction on murder-for-hire and wildlife charges extraordinary enough to captivate several filmmakers.

In a partially handwritten and at times rambling lawsuit filed March 17 from the Grady County Jail in Oklahoma, Maldonado-Passage faulted the Fish and Wildlife Service and several of its officials for "false imprisonment, false arrest, perjury, entrapment" and related alleged misdeeds.

"The FWS and its agents are clearly enforcing these laws under pressure of the animal rights groups," Maldonado-Passage declared, adding that the agency had been driven to "further a private agenda to end big cats in private collections."

The suit also ranges across a variety of alleged conspiracies and allegations that include a "crooked cop," anti-gay bias, the death of Maldonado-Passage’s mother and a $100,000 reward "placed on Plaintiff’s head."

Maldonado-Passage is representing himself in the lawsuit, which seeks $15 million in addition to $78.8 million for what he described as "18 years of research and care of 200 generic tigers and cross-breeds for 365 days a year for 18 years."

Last April, the 56-year-old Oklahoma native was convicted of two counts of murder for hire, eight counts of falsifying wildlife records and nine counts of violating the Endangered Species Act. He is appealing; in the meantime, a federal judge sentenced him in January (E&E News PM, Jan. 22).

"The zoo grew into one of the largest private zoos in the United States, housing over 200 Tigers and nearly 400 other exotic animals at one time over the next 18 years," Maldonado-Passage’s lawsuit states.

He once ran as a Libertarian in the Oklahoma gubernatorial primary, finishing third, and further embellished his reputation with a "Joe Exotic TV" podcast that emphasized the outrageous.

Prosecutors say Maldonado-Passage’s rage at Baskin eventually turned into a murder-for-hire scheme in which one supposed hit man never fulfilled the contract and another turned out to be an undercover FBI special agent (Greenwire, March 29, 2019).

The Joe Exotic yarn inspired a six-part podcast and is now the subject of the critically acclaimed Netflix documentary series "Tiger King: Murder, Mayhem and Madness."