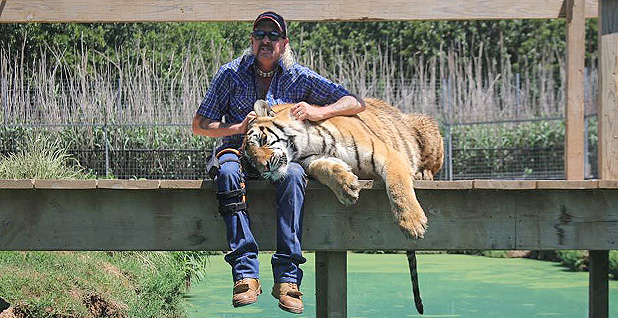 Joseph Maldonado-Passage, known as Joe Exotic, with one of his tigers. @joe_exotic/Twitter

Convicted in a bizarre murder-for-hire plot as well as some less garish Endangered Species Act violations, the onetime roadside zoo owner known as Joe Exotic is now hoping his aid to People for the Ethical Treatment of Animals (PETA) can lead to leniency.

"Joe’s animals all adored him," a friend named Regina Long wrote. "It was a special treat to see Joe walk the sidewalk in front of the enclosures. All of the animals would come to the front to get as near Joe as they possibly could."

Last April, a federal jury found Maldonado-Passage guilty on two counts of hiring someone to murder a woman in Florida, eight counts of falsifying wildlife records and nine counts of violating the ESA (Greenwire, March 29).

He now faces a prison sentence of up to 10 years for each murder-for-hire count. Each wildlife record violation could carry a prison term of five years and a fine of $250,000, and each ESA count could result in one year in prison and a fine of $100,000.

"The jury only needed a few hours of deliberation before finding him guilty of engaging in a murder-for-hire plot to kill a rival and violating federal laws… when he killed multiple tigers, sold tiger cubs, and falsified wildlife records," First Assistant U.S. Attorney Robert Troester said in a statement following the trial.

In his own handwritten letter to U.S. District Judge Scott Palk last June, Maldonado-Passage declared that "in all of my time running for public office, I would never have dreamed the system is this broken."

According to The Hollywood Reporter, Universal Content Productions is teaming with Wondery to adapt the Joe Exotic story for television, with "Saturday Night Live" cast member Kate McKinnon leading the cast.

Maldonado-Passage served as entertainment director and owner of the Greater Wynnewood Exotic Animal Park in Wynnewood, Okla. A flamboyant character, he ran as a Libertarian in the 2018 Oklahoma gubernatorial primary, finishing third with 664 votes.

"I just feel strongly about it’s your life, you own it, and as long as you don’t hurt anyone else, you should have the right to do whatever you want," Maldonado-Passage told Oklahoma City’s FOX 25 News during the campaign.

Court filings show that Fish and Wildlife Service agents began investigating him for possible violations of the ESA and the Lacey Act beginning in 2015 (Greenwire, Nov. 8, 2018).

Big Cat Rescue sued for trademark infringement, calling Maldonado-Passage’s naming ploy in a 2011 court filing part of a "counter-campaign of disinformation, misinformation and disparagement," and in 2013, it won a judgment of about $1 million.

Maldonado-Passage never paid, but reportedly, he did fume about what should happen to Baskin, and according to prosecutors, this anger mutated into a murder scheme.

Park worker Allen Glover, an ex-inmate with a teardrop tattoo, testified that Maldonado-Passage sold a kind of hybrid cat called a liliger cub to come up with a $3,000 payment in November 2017. Glover then got to Florida, where his mission collapsed.

"I just found a beach and found some people to party with," Glover testified, a trial transcript shows. "I had money."

"And were you consistently drunk and high during this trip?" an attorney asked.

After Glover failed either to warn Baskin or to finish the job, Maldonado-Passage allegedly found another supposed hit man, who turned out to be an undercover FBI special agent.

The subsequent charges against Maldonado-Passage included the claim that he killed five tigers in October 2017 to make room for cage space for other big cats, and sold and offered to sell tiger cubs across state lines.

"The animals involved were generic tigers who by regulatory act may fit within the ESA, but are commonly understood not to be endangered tigers in the wild in need of the ESA’s protections," Earley, the defense attorney, wrote in his Oct. 22 sentencing memo.

But first and foremost, wrote a friend named Christine Hansen, Joe Exotic is an animal lover.

"Each morning he would go out there before the park opened and walk around loving on his animals, having breakfast with his chimps, who he called his children, feeding them by spoon and laughing with them there all by himself," Hansen wrote.