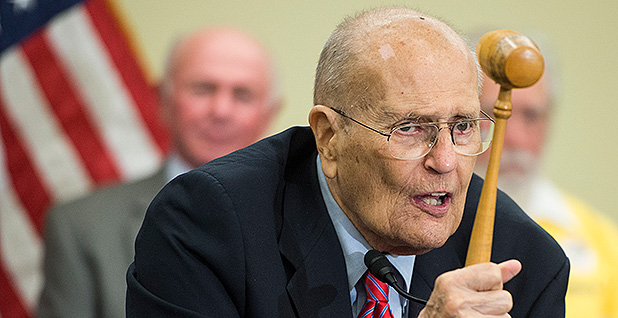 Former Rep. John Dingell (D-Mich.), who served in the House for six decades, died yesterday. In 2015, celebrating the anniversary of Medicare, Dingell held the gavel he used when presiding over the vote. Bill Clark/CQ Roll Call/Newscom

Former Michigan Democratic Rep. John Dingell, who served in the House for nearly six decades and helped write some of the nation’s marquee environmental laws, died yesterday. He was 92.

Earlier this week, his wife, Rep. Debbie Dingell (D-Mich.), announced he had entered a "new phase." Media outlets reported him being in hospice care following complications related to prostate cancer. He died at home in Dearborn.

"He was a lion of the United States Congress and a loving son, father, husband, grandfather, and friend," said a statement from Rep. Dingell’s office.

"He will be remembered for his decades of public service to the people of Southeast Michigan, his razor sharp wit, and a lifetime of dedication to improving the lives of all who walk on this Earth," the statement said.

Dingell announced his retirement from the House in 2014 after serving longer than anyone else. His wife ran for his seat and won.

Around the time of his retirement, Dingell told the Detroit Free Press: "I’m not going to be carried out feet first. I don’t want people to say I stayed too long."

Dingell was not quiet in retirement. He was active on social media, often offering witty commentary on current events (Greenwire, May 18, 2018).

"When something needs to be said," Dingell told E&E News during an interview last year, "I say it."

He also penned a memoir, "The Dean: The Best Seat in the House," in which he took on enemies and called for abolishing the Senate (E&E Daily, Dec. 5, 2018).

The former congressman recalled his "Dingellgrams" — frequent letters requesting documents from the administration.

"They were long and detailed, and asked tough, probing questions," he wrote. "In short, they were dreaded by their recipients."

Dingell was a force on the Energy and Commerce Committee for nearly three decades, chairing the panel from 1981 until 1995, when he became ranking member for the next 12 years. He regained the gavel for a final term in 2007-2008.

He and rival Rep. Henry Waxman (D-Calif.) jousted for years on the committee over a rewrite of the Clean Air Act, as Dingell sought to cushion Detroit automakers from the aggressive regulation sought by the liberal from smog-plagued Los Angeles.

Nearly a decade later, the Clean Air Act amendments of 1990 were signed into law by President George H.W. Bush.

Dingell’s investigative skills were legendary, as well. A committee investigation of President Reagan’s EPA later led to the conviction and imprisonment of Rita Lavelle, who oversaw the Superfund program.

Dingell was widely admired by both parties for his deal-making and ability to outmaneuver his opponents, but his meticulous approach to crafting major legislation later contributed to his downfall.

At the outset of his final term as chairman, Dingell clashed with Speaker Nancy Pelosi (D-Calif.) over her plans to create a select committee on climate change, which the turf-conscious chairman famously called "as useful as feathers on a fish."

While Pelosi was anxious to legislate on climate, Dingell launched a lengthy series of hearings on the topic and collected reams of outside feedback for "white papers" intended to guide the drafting of the bill.

Dingell’s interest in revisiting California’s waiver authority over auto emissions under the Clean Air Act annoyed Pelosi, who backed a challenge by Waxman to bypass the more senior Dingell when the new Congress convened in 2009.

Waxman won that contest, designating Dingell as "chairman emeritus" and forgoing his right to claim a Capitol office suite as a consolation prize.

Efforts to pass a companion bill through the Senate collapsed the following year, effectively ending congressional efforts to legislate on climate after the House flipped to Republican control in 2011.

‘Not done with me just yet’

Dingell was a fierce critic of President Trump and his environmental agenda, worried about Republicans rolling back some of his achievements.

"He can appoint hostile people who won’t address the cases that have to be addressed, he can appoint ignoramuses or people who are hostile to doing their jobs," said Dingell.

On climate change, he said, "Nobody understands how the hell this is going to be addressed. This is one of the most complex scientific problems that we’ve got in the world."

"The Lovely Deborah is insisting I rest and stay off here, but after long negotiations we’ve worked out a deal where she’ll keep up with Twitter for me as I dictate the messages. I want to thank you all for your incredibly kind words and prayers. You’re not done with me just yet."