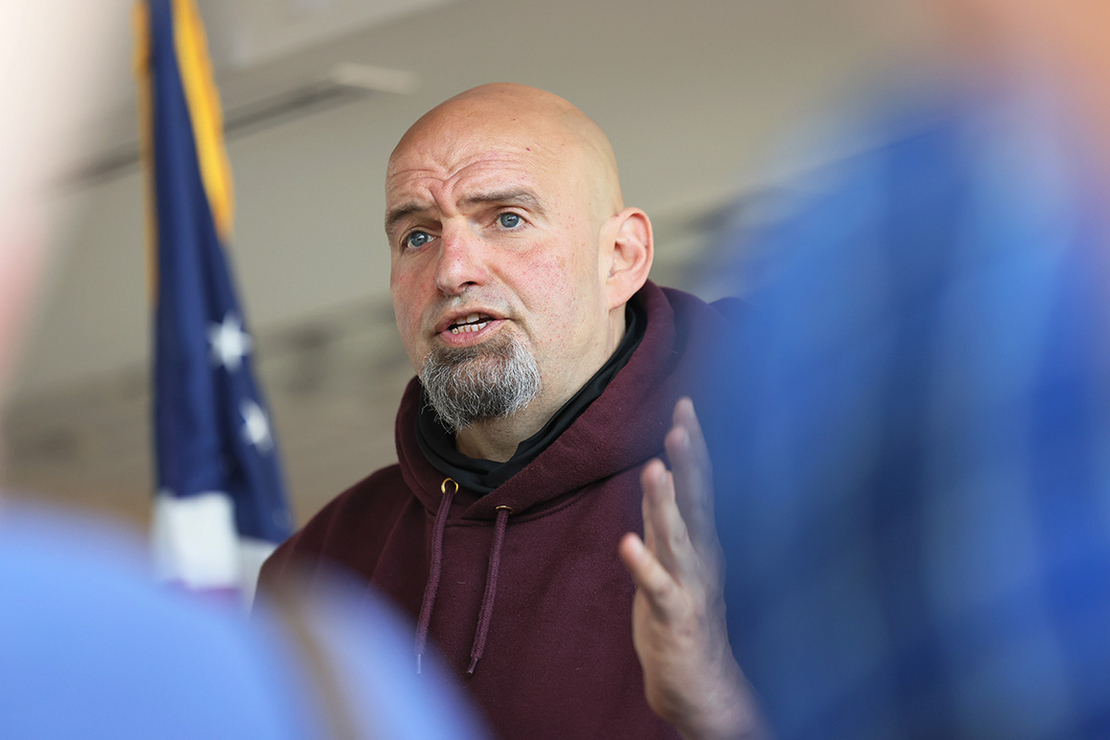 Long before he set his sights on the U.S. Senate, John Fetterman used his working-class credentials to sell climate change policies.

Fetterman in 2009 was mayor of Braddock, Pa., a post-industrial suburb of Pittsburgh, when he starred in the “Carbon Caps = Hard Hats” campaign and testified at a pair of congressional hearings in favor of the cap-and-trade legislation lawmakers were considering.

It wasn’t Fetterman’s first time on the national stage; he had in the preceding months been featured in The New York Times, NPR, “The Colbert Report” and elsewhere for his attempts to revive the declining and dangerous town — and, secondarily, for his no-nonsense personality and image as a 6-foot-8, 325-pound, tattooed, Harvard University-educated champion of the working class.

But the episode appears to have been Fetterman’s first major push into federal policy.

Now Pennsylvania’s lieutenant governor, he became this week the Democratic Party’s pick in their bid to flip one of the state’s Senate seats, and possibly keep control of the upper chamber.

In November, he’ll face the Republican nominee, either former cardiothoracic surgeon and television personality Mehmet Oz or former hedge fund executive David McCormick, depending on the outcome of a primary that’s likely headed to an automatic recount.

‘Path we are on has failed’

At the time of the 2009 campaign and hearings, Democrats were pushing for a greenhouse gas emissions cap-and-trade system, with legislation that became the American Clean Energy and Security Act, or Waxman-Markey, after its lead sponsors, then-Reps. Henry Waxman (D-Calif.) and Ed Markey (D-Mass.).

Fetterman lent credence to the argument espoused by many liberal climate champions that a host of new wind turbines, solar panels, transmission lines and operations would create a massive boom to jobs and economic activity. He argued that capping carbon had the potential to reinvigorate communities like Braddock.

“The path we are on has failed,” Fetterman, the first witness at the April 22, 2009, hearing of the House’s Select Committee on Energy Independence and Global Warming, told Markey, the panel’s chair. He pointed to Braddock’s economic devastation and the more than 250,000 jobs lost in preceding years in Pennsylvania’s steel industry.

“To win the most jobs and the most economic opportunity, we must be a market leader in these new products and technologies, and a cap on carbon in the United States will spur our companies to be the early movers in these new markets supplying solutions at home and selling these solutions across the globe.”

The “Carbon Caps = Hard Hats” advertising campaign, launched the prior week, made a similar case, accompanied by black-and-white images of Fetterman with hard-hatted steelworkers at what appears to be a closed plant in Braddock (E&E News PM, April 14, 2009).

“Towns like Braddock need Congress to cap carbon so we can get to work,” he said in a statement on the campaign’s launch. “It takes 250 tons of steel to make a wind turbine, and we’re ready to make as many as we can. We’ve lost 250,000 jobs in Monongahela Valley, and I want to bring them back for the next big business built on steel.

“I can sum up a carbon cap in one four-letter word: jobs,” he said in an ad.

Fetterman said at the time that he wasn’t paid for participating in the campaign.

Months later, the House passed the Waxman-Markey bill. But the next year, Senate Democratic leaders called off their consideration of climate legislation, dooming the prospect of major congressional action on climate change.

Fetterman’s participation helped support what was at the time a relatively novel argument for climate action, said Nat Keohane, who in 2009 was a leader at the Environmental Defense Fund. EDF Action, the group’s advocacy arm, was one of the backers of the “Carbon Caps = Hard Hats” campaign, alongside the BlueGreen Alliance and the United Steelworkers. Keohane also testified at the House hearing.

“This was in the context of a particular piece of legislation, but those bottom-line messages that Fetterman was talking about remain true,” Keohane told E&E News this week. “That was what was sort of novel at the time — let’s have a guy from a former steel town talk about the importance of this.”

Keohane said Fetterman’s character and image likely played a role in the media coverage and attention the 2009 effort got. “People took note in the hearings, when a guy like that comes in with a story like his.”

Keohane is now president of the Center for Climate and Energy Solutions. The group doesn’t participate in election politics, so it isn’t involved in the Senate race.

“I was thinking, ‘Wait a minute, Fetterman, wasn’t he the guy that we had in the “Carbon Caps = Hard Hats” campaign?’ I don’t think there are too many 6’8 mayors of steel towns around,” he said. “Memorable guy.”

Fetterman’s campaign didn’t respond to requests for comment on the 2009 efforts.

‘Fight to protect our planet’

Cap and trade has fallen out of favor as a specific climate policy since then, though Fetterman remembers his work; he tweeted a screenshot of his House subcommittee appearance last year.

And the jobs and economic arguments live on, in some fashion, in Fetterman’s Senate bid. He wants to transition away from fossil fuels, though without a quick ban on fracking, which he sees as a key source of jobs and economic activity in Pennsylvania (E&E Daily, Sept. 28, 2021).

“It’s a race for every job that has been lost, every factory that’s closed, every cost that keeps rising, every worker that can’t keep up,” Gisele Fetterman continued.