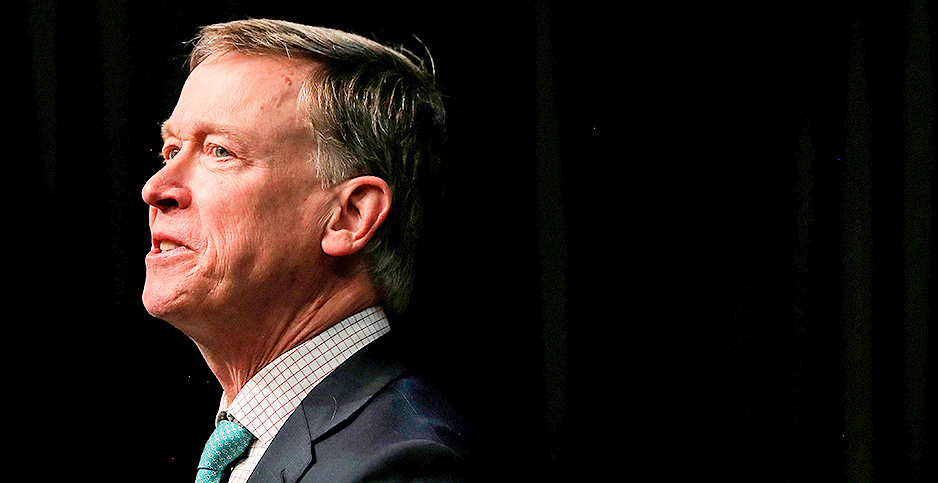 John Hickenlooper is the only presidential candidate who has taken a sip of fracking fluid.

The former Colorado governor famously took a swig of the viscous liquid to prove it was safe during a meeting with oil and gas company CEOs in 2013.

Ever since, the Democrat has faced criticism from environmentalists for being too cozy with the fossil fuel industry. Some greens have even furnished a new nickname for the candidate: Frackenlooper.

In an interview with E&E News this week, however, Hickenlooper said the incident has been taken out of context by many news outlets and observers.

In fact, he said, the episode helped him gain the trust of the oil and gas company CEOs, which led to the eventual passage of the nation’s first-ever methane emissions regulations for the industry.

"I don’t see how anyone can say I was friendly to the industry because I didn’t do anything except cost them money," Hickenlooper said. "When we implemented the methane regulations, it cost them $60 million."

A 1974 graduate of Wesleyan University, Hickenlooper worked as a geologist before co-founding a microbrewery in the Rocky Mountains. He went on to serve two terms as Denver mayor from 2003 to 2011, followed by two terms as Colorado governor from 2011 to 2018.

An outspoken critic of the Green New Deal, the candidate favors a more moderate approach to addressing climate change. But he still recognizes the need to transition the country to net-zero greenhouse gas emissions by 2050.

Polling around 1% and strapped for cash, Hickenlooper faces an uphill battle to qualify for the next Democratic debates in Detroit at the end of the month. Aides have privately urged him to drop out of the race and run for U.S. Senate instead, Politico reported.

Nevertheless, Hickenlooper struck a note of optimism while speaking to E&E News this week from a campaign stop in Chicago, pitching himself as a pragmatist who can implement real climate solutions for the country.

Do you think climate change is a "crisis"?

Without question. I mean, it is the most pressing issue facing the world. As high as the stakes are for these other issues, there is no place where we have more chips on the table than the climate. It should require a fierce urgency from everybody.

Why do you oppose the Green New Deal?

In my experience, if you’re dealing with something that really is serious and urgent, you have to be laser-focused. There are things in the Green New Deal that I feel are a serious distraction, like the notion that we would provide a federal job guarantee for every American. I think that just makes it harder to get legislation through Congress. And even if you got it through, that makes it harder to implement it.

You know, of all these people running, I’m kind of the person who’s done the most implementation of big, progressive plans. You just have to be laser-focused.

The Intergovernmental Panel on Climate Change found that the world needs to reach net-zero greenhouse gas emissions by 2050. Do you support that goal?

We’re happy to go net-zero by 2050. But I think you have to be looking at a whole array of solutions to realistically be able to achieve those kinds of ambitious goals. And I think obviously we’ve got to do things like converting coal-fired generation plants to wind and solar, like we’ve done in Colorado.

I think we also have to start doing more research on innovation, right? How do we create new forms of concrete and things that can replace concrete that don’t release all this [carbon dioxide]? I mean, I could go down the whole list if you want. There’s just a bunch of stuff that’s going to take a serious effort and major collaboration.

How high would the carbon fee have to be to reach net-zero emissions by 2050?

You know, I don’t have the number per ton right in front of me. But I know that we’d escalate it. And the key is to move rapidly to get to places where we can make real progress in real time.

In some circles, you’re seen as the most oil- and gas-friendly Democratic candidate. What do you make of that?

Look, we were one of the states, if not the first state, to require transparency on the ingredients of frack fluid. We also created some of the first — and some of the most rigorous — methane regulations. I would match our regulations with any state in America. We created the regulations before California, before Texas, before anybody. No one else had ever done that. They’re now being rolled out as national policy in Canada.

Tell me about the time you drank fracking fluid.

Here’s exactly what happened. I was at a meeting with the CEOs of oil and gas companies, and one of the executives had this 1-liter container of clear liquid. It was absolutely transparent. It looked like water. But it had the viscosity of syrup. And he said, "This is food-grade frack fluid. You could actually drink this." In other words, everything in here has been approved by the [Food and Drug Administration] to put in food.

He took the top off and sipped it, and then he put it in front of me. At that point, if I was going to get them on board with the methane regulations, there was going to have to be some trust. So I took a sip of it. I figured, how bad could it be? I thought the greater end was that they would trust me. And that’s the part that usually gets left out of that story. I don’t think we would have gotten the methane regulations without that. And just in the state of Colorado, those regulations are the equivalent of taking 320,000 cars a year off the roads.

Do you expect to qualify for the second Democratic presidential debates in Detroit at the end of the month?

Absolutely. Yeah. I’m looking forward to it. I want to make sure that my voice as a scientist and as a pragmatist gets heard.

Would you consider dropping out of the presidential race and running for U.S. Senate? There’s a rumor about that circulating.

[laughs] I am 100% focused on winning the Democratic nomination to run for president. I’ve got no ulterior plans. I’m not fundraising. I’m not planning for it. I’m not even talking about it.

You know, when I look at all of the people who are running for the Democratic nomination, I really do feel like I’m the one person that’s actually done what everyone else is talking about. And I want to be able to go across pragmatic states like Iowa and New Hampshire and say, "Listen, there are lots of talkers out there that have lots of ideas. But I’m a doer. And I think I have done what everyone else is just talking about."

You used to own a microbrewery. Are you still an avid beer drinker?

I actually took a year off from college and worked on the northern coast of Maine and learned to home brew back in 1971. So I’ve been brewing forever. And then when I got laid off as a geologist, I built the Wynkoop Brewing Co., which was the first brewpub in the Rocky Mountains. I think we were like the 12th or the 14th brewpub in America. Now, there are over 5,000.

And I do still love beer. The one beer that was my favorite that we ever brewed, but I don’t think they still make it anymore, was called Hickenlooper Lager. We’d use it as a bar-side sobriety test. [laughs] If you couldn’t say it, we wouldn’t serve you another one.