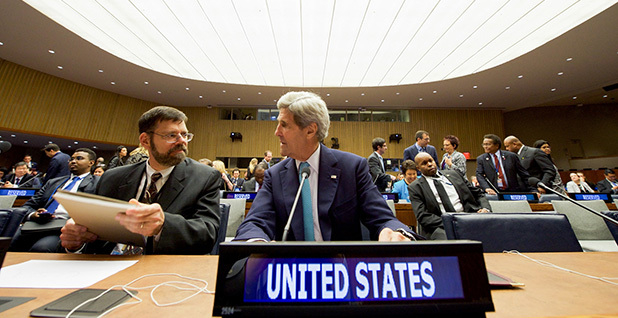 Then-Secretary of State John Jerry after signing the Paris climate agreement in 2016. He will be a top witness this week during a hearing on climate change. Department of State/Flickr

Their testimony at the House Oversight and Reform Committee will top the list of four climate hearings this week, including another on the Senate side.

The House Foreign Affairs Committee will also vote on H.R. 9, Democrats’ bill to keep the United States in the Paris Agreement, setting up a floor vote when Congress returns from a two-week recess late this month.

After all the action this week, at least 16 different House panels, including subcommittees and the climate select committee, will have held hearings in the 116th Congress specifically about climate change. And more are likely on the way.

It’s part of an effort by leadership to stress the issue over the next two years, even if the Republican Senate makes it nearly impossible to pass major climate legislation.

House Speaker Nancy Pelosi (D-Calif.) said from the outset that climate would be a recurrent issue across the standing committees.

The Oversight and Reform hearing tomorrow could be a particularly interesting affair, given the partisanship that has defined the panel early in this Congress.

Chairman Elijah Cummings (D-Md.) has clashed with ranking member Jim Jordan (R-Ohio) and other hard-line conservative members on the committee, most prominently over the controversies surrounding President Trump.

The most infamous example was a hearing in February featuring Michael Cohen, the president’s former lawyer and fixer, who pleaded guilty last year to lying to Congress.

Kerry and Hagel, both former senators, will be just the latest high-profile witnesses Democrats have brought in to speak about climate change.

The pair last month topped a letter from 58 former military and intelligence officials asking the White House not to follow through on its proposed "adversarial" review of climate science (E&E News PM, March 5).

Later in the afternoon tomorrow, the Oversight and Reform Environment Subcommittee will hold its own hearing focusing on the history of climate science and misinformation campaigns by the fossil fuel industry.

That hearing will feature Michael Oppenheimer, a Princeton University climate expert who has long participated in U.N. Intergovernmental Panel on Climate Change assessments.

Also that afternoon, the House Homeland Security Emergency Preparedness, Response and Recovery Subcommittee will hold a hearing to assess the impacts of climate change.

And the House Foreign Affairs Committee will mark up H.R. 9, the climate bill being pushed by leadership, sponsored by Rep. Kathy Castor (D-Fla.) and a slew of other Democrats.

The Energy and Commerce Committee passed the measure along partisan lines last week, to the chagrin of the panel’s Republicans and Chairman Frank Pallone (D-N.J.), who said leadership wants to push the bill through committee and onto the floor during the first week of May (E&E News PM, April 4).

The bill would bar the Trump administration from spending any money to withdraw from the Paris climate agreement and require a plan to meet emissions targets within 120 days.

It’s almost guaranteed to pass the House and be stymied in the Senate, but climate change is still getting some attention on the other side of Capitol Hill.

The Senate Energy and Natural Resources Committee will hold its second climate hearing of the 116th Congress on Thursday. Much like its last climate hearing, the panel will focus on energy innovation (E&E Daily, March 6).

The committee under Chairwoman Lisa Murkowski (R-Alaska), who has long talked about the effects of climate change in her home state, has emerged in this Congress as a forum for modest measures to address emissions.

While Murkowski and ranking member Joe Manchin (D-W.Va.) haven’t delved into specifics yet, both have signaled interest in clean energy tax incentives and research funding.

Schedule: The House Oversight and Reform full committee hearing is Tuesday, April 9, at 10 a.m. in 2154 Rayburn.

Schedule: The House Oversight and Reform Environment Subcommittee hearing is Tuesday, April 9, at 2 p.m. in 2247 Rayburn.

Schedule: The House Foreign Affairs markup is Tuesday, April 9, at 2 p.m. in 2172 Rayburn.

Schedule: The Senate Energy and Natural Resources hearing is Thursday, April 11, at 10 a.m. in 366 Dirksen.