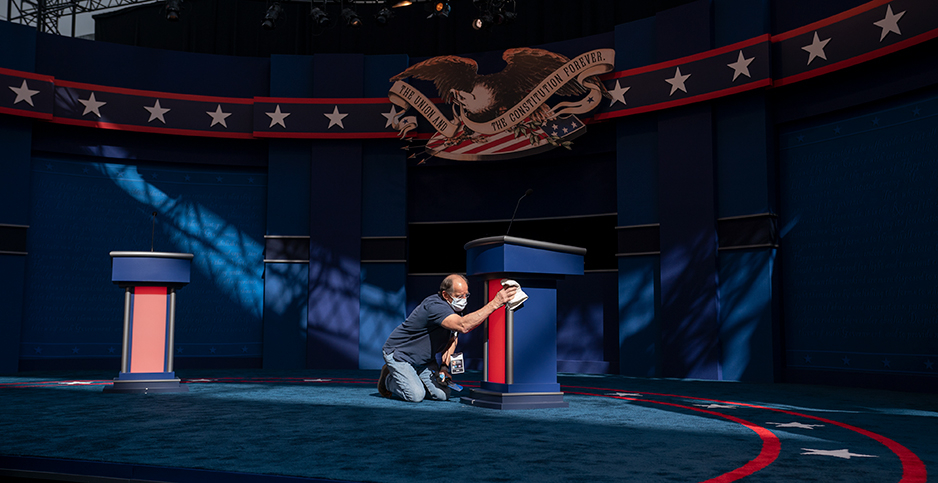 Democratic presidential nominee Joe Biden is expected to wedge climate issues into tonight’s debate even if there are no questions about the environment, former Secretary of State John Kerry told donors at a private fundraiser, according to audio obtained by E&E News.

Climate change was omitted from debate topics selected ahead of time by moderator Chris Wallace, the Fox News anchor. Wallace plans to ask about Biden’s and President Trump’s records, the economy, the pandemic, election integrity, the Supreme Court and "race and violence in our cities."

Biden nevertheless should use questions about the economy to talk about climate, Kerry said last week at a fundraiser hosted by the Iowa chapter of Clean Energy for Biden.

"I can’t imagine he’s not going to mention climate and hold Trump accountable for it, whether he gets the question or not," said Kerry, who has helped Biden expand his climate plan.

"You can’t talk about the economy, and resuscitating it, without talking about building out the new energy system of America," he said.

A Biden administration would start implementing climate policy on day one, Kerry said in response to a question.

"Hundred percent. I mean, he’ll move immediately on executive orders and different things, but he’s not going to — you can’t do everything on day one. But he’ll do important, symbolic — and real — efforts to roll some things back right away," he said.

The Biden campaign did not respond to a request for comment.

Kerry also cast the Paris climate agreement — one of his own legacy achievements, as well as a big part of Biden’s environmental record — as a disappointment.

"I hate to say this, folks: It’s a little glum. I’ll give you the bright side, too. But right now, if we did everything that we set out to do in the Paris Agreement — and we’re not — but if we did do everything, the Earth’s temperature would still increase to 3.7 degrees" Celsius above preindustrial temperatures, he said.

"And you say to yourself, ‘Whoa, I thought you guys went to Paris to avoid that.’ Yeah, we did. We set a goal of holding it to 2 degrees, aspirationally to 1.5 [degrees]. But we knew we couldn’t mandate it. Why? Because the United States Senate would never ratify it or allow it to happen," he said.

Trump has exacerbated problems that already existed in the Paris Agreement, Kerry said.

"Partly because Donald Trump pulled out of the Paris Agreement — and I’m not going to sit here and tell you it’s entirely because of him, but it’s greatly complicated by him. Countries that were already reluctant have just gone back to being reluctant," he said.

The Constitution requires two-thirds of the Senate to approve treaties. To sidestep that, President Obama cast the Paris Agreement as a nonbinding political agreement. Each country set its own goals for emissions reductions, had the power to unilaterally adjust those goals and did not face any punishing mechanism for falling short.

Those provisions meant Trump had to lie about the reasons he decided to quit the Paris Agreement, said Kerry, who highlighted industry’s influence in the negotiations.

He explained that negotiators in Paris were trying to signal that clean energy would be a safe investment for private capital.

"What we were doing was trying to light a fire under the private sector, to persuade the private sector that, wow, 196 countries are all going to do similar kinds of things in the renewable and clean energy field, that’s the place to put our money. And for the first two years, folks, that worked.

"More money was invested in alternative and renewable energy than in fossil fuel for the first time in human history," Kerry said.

A similar theory animates Biden’s plan to convert the federal fleet into electric vehicles. Along with those direct emissions reductions, the policy is intended to demonstrate that a dedicated market for that technology would exist, in hopes of spurring automakers to scale up production to meet that demand.

Biden tapped Kerry to co-chair the unity task force on climate with supporters of Sen. Bernie Sanders’ (I-Vt.) presidential run. That task force recommended a host of more aggressive timelines for Biden’s climate plan, which originally had centered around a 2050 decarbonization deadline.

At the fundraiser, Kerry stressed that decarbonization needs to be speedy.

"Folks, we don’t have a lot of time. And I don’t buy into the 2050 [deadlines]. I think it’s too much of a way for people to avoid setting real goals that are measurable now," Kerry said, adding that policymakers are "beginning to aim toward 2025, 2030, 2035. So what Joe Biden has done is put together a plan that does exactly that."

Hill showed photos of her younger brothers and told the other participants that this election would affect the rest of their lives.

"You all know that I can’t vote. And I can’t give Joe my allowance. So we need to make sure that we’re doing everything possible to make sure Joe Biden is elected," she said.