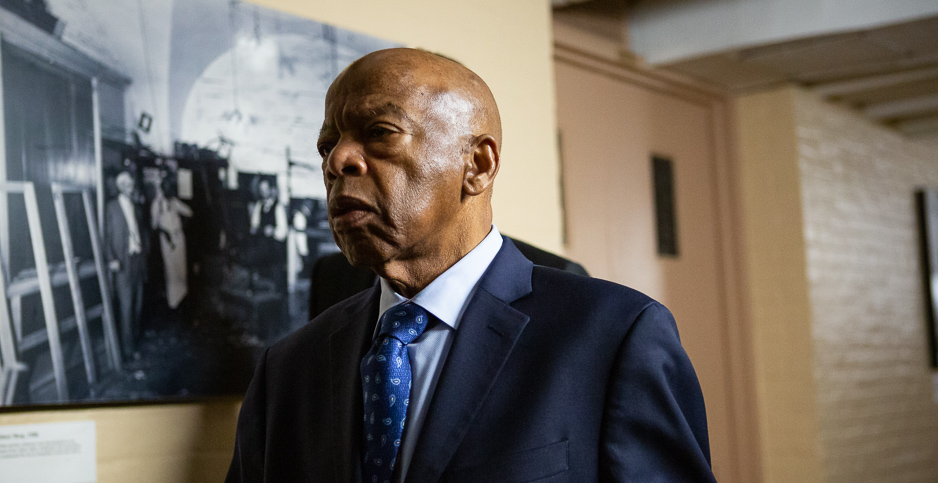 While Lewis was known primarily for his efforts to bring about racial equality, he was also a vocal advocate of protecting the environment.

"Combating climate change is not a Democratic or Republican issue. It is the question of preserving this little piece of real estate we call Earth for generations yet unborn," Lewis said during a 2019 Ways and Means Committee hearing.

Environmental advocates were quick to highlight Lewis’ efforts during his more than half-century in public life.

"Representative Lewis was rightfully known first and foremost as a champion for civil rights, but he was also a champion for the deeply connected issues of clean air, clean water and environmental justice," said Gene Karpinski, president of the League of Conservation Voters, in a statement.

"It’s now on us to protect the voting rights he risked everything for in order to create a just and equitable democracy, defeat the climate crisis, and provide safe and healthy communities for everyone. There is no other hero like John Lewis, but we must all strive to follow his powerful example."

Rep. Kathy Castor (D-Fla.), chairwoman of the House Select Committee on the Climate Crisis, said Lewis will be missed.

"He never gave up on what he believed to be the ideals of America, and leaves behind a generation of young Americans to take up his fight. We are all better for the life’s work and good trouble of John, and he will be sorely missed," Castor tweeted Saturday.

In 1992, Lewis joined forces with then-Sen. Al Gore (D-Tenn.) on the "Environmental Justice Act," which would prohibit the construction of new hazardous waste facilities and targeted the 100 worst environmentally sensitive areas in the country.

The bill didn’t go anywhere, but during the next 27 years Lewis continued to introduce related legislation, most recently H.R. 5167, the "Creating Opportunities in Research for Environmental Justice Act of 2019."

"The rest of the world has seen the economic and environmental benefit of clean energy, and they will leave us behind," Lewis said in 2017, when Trump announced his decision.

"We do not live on this planet alone. It is not ours to hoard, waste or abuse. It is our responsibility to leave this world a little more clean and a little more peaceful for all who must inhabit it for generations to come."

Earlier this month, as the House debated H.R. 2, a massive transportation and infrastructure legislative package, Lewis highlighted environmental concerns in his floor statement.

"This vital legislation makes critical investments in our nation’s transportation, upgrades our drinking water and energy systems, and builds new hospitals, schools, and homes," he said in his written statement.

Funeral arrangements for Lewis are pending. There have been calls for Lewis to lie in state in the Capitol Rotunda, but questions remain about how such an honor would be carried out amid the pandemic.

Flags around the Capitol and at federal government buildings have been lowered to half-staff.

"@RepJohnLewis was a titan of the civil rights movement whose goodness, faith and bravery transformed our nation. Every day of his life was dedicated to bringing freedom and justice to all," House Speaker Nancy Pelosi (D-Calif.) tweeted Friday night.

In a statement released this morning, Pelosi said Lewis’s family would not announce funeral arrangements until after Rev. C.T. Vivian’s funeral on Thursday. Vivian, who passed away the same day as Lewis, was also active in the civil rights movement.

The Georgia delegation will offer a moment of silence today, lead by the dean of the delegation, Rep. Sanford Bishop (D-Ga.). Members will also offer a bereavement resolution.

House Minority Leader Kevin McCarthy (R-Calif.) called Lewis his friend in a tweet Saturday, and recalled visiting the Edmund Pettus Bridge in Selma, Ala., scene of the Bloody Sunday protest in 1965 where officers beat civil rights protesters, including Lewis.

The last press release issued from Lewis’ office on Friday, the day he died, touted a joint effort between McCarthy and Lewis advocating grant money for teachers nationwide to increase American civics awareness at the elementary and high school levels.