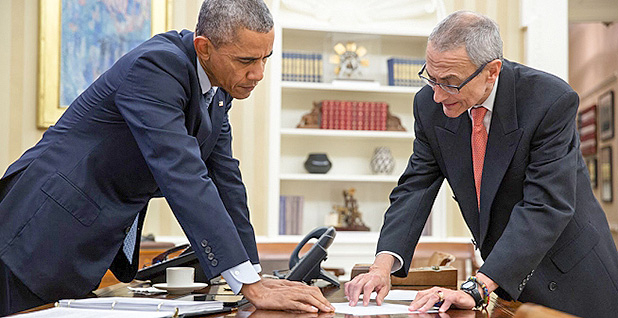 John Podesta fielded multiple invitations for President Obama even after leaving his position as White House adviser, his hacked emails leaked by Wikileaks show. Photo courtesy of the White House.

This weekend’s additions to the growing pile of emails allegedly stolen from John Podesta’s account show the Clinton campaign chairman and veteran of two White Houses as a gatekeeper for climate advocates seeking time and attention from his bosses.

In an April 2014 exchange, League of Conservation Voters President Gene Karpinski asked Podesta, then a senior White House counselor, to urge President Obama to speak at the group’s annual dinner. Karpinski noted that it would be a good opportunity for the president to tout his flagship Clean Power Plan, which had just been proposed.

"I hope you can help make it happen! We are told it is still under consideration," said Karpinski.

Another email from three years earlier, before Podesta, who had been President Bill Clinton’s White House chief of staff, joined Obama’s White House, appears to show a Clinton Foundation employee’s conviction that Podesta could get the former president to record an anti-deforestation message ahead of the U.N. climate talks in Durban, South Africa, even when other foundation staff had already declined.

D. James Baker, the director of the foundation’s Global Carbon Measurement Program, enlisted Podesta to persuade "the President" to record the 2011 message as a tribute to African "green belt" pioneer and Nobel Peace Prize recipient Wangari Maathai, who had just died. In context, he appears to have been referring to Clinton, because Podesta had just begun working at the foundation on a short-term basis.

"We know that Wangari would have wanted the President to do this," Baker argued. He had apparently proposed some talking points for Clinton that have not been released as part of the email chain.

But Clinton’s director of foreign policy, Amitabh Desai, called Baker’s appeal to Maathai’s memory "sad and disingenuous" and suggested that Podesta refer any future attempts to any of the "numerous" foundation staff members who had been approached already.

"Years of Living Dangerously" co-executive producer Jeff Horowitz reached out to Podesta in a 2014 email to celebrate the climate documentary series’ winning an Emmy award after Podesta evidently used his White House messaging chief position to help secure the show an interview with President Obama.

"Pres. Obama’s interview could not have been better!" Horowitz wrote. "Now working on new full feature, big-budget, climate change solutions documentary… we need to continue to get the word out!"

Horowitz closed by reminding Podesta that he had sent him a bottle of cabernet from his California vineyard, Rio Lago, while the latter was still president of the Center for American Progress.

"Hope it made it to you," Horowitz wrote.

Other emails show how closely entwined environmental interests can be with Democratic politics.

In January 2015, as Podesta and White House Council on Environmental Quality chief Mike Boots prepared to leave the White House, Karpinski wrote an email urging the two Obama administration officials to accept a party sponsored by LCV and the Climate Action Campaign to honor their "incredible public service, and in particular your leadership efforts on fighting climate change and protecting our environment."

"This is, of course, an offer that you MUST accept," Karpinski wrote.

In September of last year, LCV’s senior vice president for government affairs, Tiernan Sittenfeld, emailed Podesta to make sure he has seen that former Obama climate adviser Heather Zichal had endorsed Sittenfeld’s brother, P.G. Sittenfeld, in a U.S. Senate race in Ohio. By this time, Podesta was working with the Hillary Clinton presidential campaign. LCV wouldn’t endorse the former secretary of State in the Democratic primary for two more months.

"PG actually had the chance to talk with Secretary Clinton at a Cincinnati event hosted by their mutual supporters, Jennie and Allan Berliant, today," wrote Sittenfeld. "He said she was very impressive, and he really appreciated her interest in his education initiatives."

Not all interactions with the media were calculated to be as pleasant for Podesta as the one with "Years of Living Dangerously." In a 2010 email, Podesta and policy adviser Kristina Costa prepared for a Clinton interview with Anderson Cooper. In it, Clinton’s advisers predicted that the CNN news show anchor would "make her eat" a 2010 statement she made while secretary of State that she was "inclined" to approve the Keystone XL oil pipeline.

Clinton came out against the Alberta-to-Texas pipeline last year.

Podesta and Costa were working on talking points citing evidence from 2010 and later that showed that Canadian oil sands would exacerbate climate change.

"At a time when we need to be investing in making America the clean energy superpower of the 21st century, KXL points us in the wrong direction," their memo stated.

Clinton and her advisers are also seen weighing how "to soften the blow" to building unions ahead of her reversal on Keystone. In an August 2015 email, Clinton’s energy advisers passed along an op-ed to be released close to Obama’s unveiling of his decision about whether to grant the project a permit.

Staff suggested stressing Clinton’s broader energy infrastructure proposal, which included incentives to cities and other local governments to encourage them to update their pipelines — an initiative that would create jobs for unions let down by the Keystone decision.