John Podesta on climate: ‘Strike while the iron is hot’ 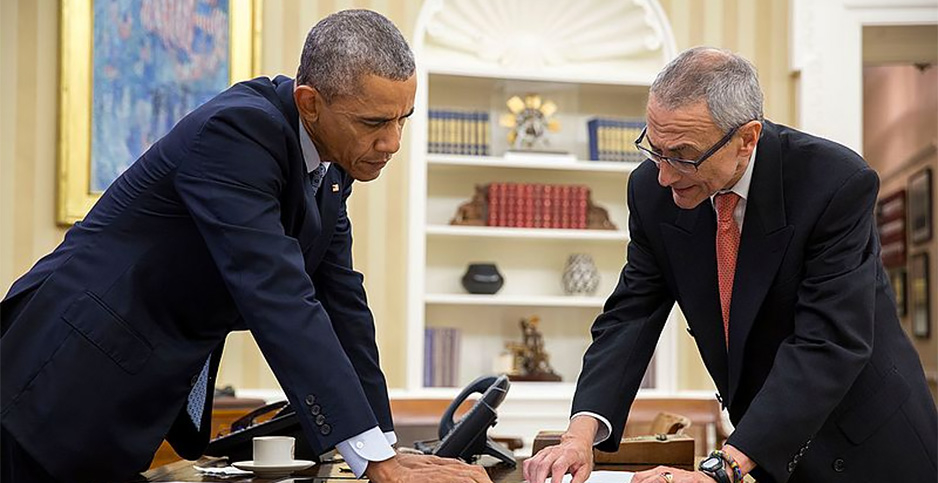 John Podesta, who advised Presidents Obama and Clinton, is working to raise the profile of climate change in this year's presidential race. Pete Souza/Obama White House

John Podesta wants Democrats to take the gloves off.

As an adviser to President Obama, Podesta helped shape some of the most aggressive climate policies in American history. Virtually all of that work has been targeted by the Trump administration for rollback, replacement or rejection.

A former chief of staff to President Clinton and campaign chairman for Hillary Clinton, Podesta wants his party to craft a climate platform that can’t be dismantled by the next Republican president. The long game he envisions will involve appointing judges, ending the Senate filibuster and even adding another state to the union, he told E&E News in a wide-ranging interview.

Podesta — who is now an advisory board member for Climate Power 2020, an advocacy group comprising political and environmental leaders seeking to infuse climate politics into key elections across the country — was a driving force behind climate policy that came out of Obama’s second term.

With little chance of getting climate policy through Congress, the Obama administration focused on a strategy of using executive orders and regulations to achieve climate initiatives. Many of those efforts have been rolled back by the Trump administration.

In the interview, Podesta mapped out a strategy to avoid that same fate for the Democratic Party’s presumptive nominee, Joe Biden, if he should win the presidency in November. The public is now more willing than ever to accept policy that mitigates global warming, he said.

Executive orders don’t seem to be the best way to craft climate policy. What is the best way for a President Biden, and maybe a Democratic Senate, to lock in policy that a future president, like Tom Cotton or Ted Cruz, can’t overturn?

There’s plenty of advantage with getting it put into legislation, but you have to deal with the circumstances you’re in. In Obama’s case, when I was [the administration] in 2014 and 2015, there was no chance of making progress on the legislative front. He had a lot of authority under the Clean Air Act. He used it. If Biden is blessed with a Democratic Senate, which seems more plausible now than it did a few months ago, I would say you have to strike while the iron is hot.

The need to rebuild the economy, plus build it back together with sustainability and energy efficiency, mean that a Democratic Senate can move quite quickly to put in place the investments that Biden has called for. The one thing that has changed from 2009 is the one big economywide fix — cap and trade, tax and dividends — aren’t going to get you to go fast enough in the harder-to-decarbonize sectors. I think there is much more likelihood that he is going to have to have specific policy interventions, including on the research and development side, that say how are we going to go after power, how are we going to electrify transportation, standards on buildings? He can do a lot on the government side.

How do you incentivize the states and cities to move forward on that agenda? I think you’re going to have to organize your government to have an all-in approach that’s moving these complicated, interrelated pieces together. It doesn’t matter if we electrify transportation if we haven’t decarbonized the power sector.

Of all of Trump’s deregulatory efforts, the climate and environment sector is probably where he has been the most aggressive. What are the ways you can make climate policy more bulletproof?

I think the [American Recovery and Reinvestment Act] is an example. You just have to do it bigger and better. If you can get standards inked into legislation, that’s better, and if you have a Democratic Senate, that’s possible. If you don’t, that doesn’t mean you give up, I think it means you keep going. If you look at the reversals Trump has attempted, a lot of them have been blocked; they are still in court; we can still stay on track. At some point, maybe the Republican Party will realize that being the anti-science, stupid party is probably not a good long-term strategy.

One of the reasons the power sector has changed so much is because the cycle of investment drove down the price of renewables to the point where they’re cheaper than the alternatives. You can’t get the system pushing in that direction. The same thing is happening in Europe: The private sector is moving in that direction. There are more calls from institutional investors for more sustainability investment, for more transparency in climate risks associated with company balance sheets, and I think you just have to get the whole system moving in that direction and it becomes hard to reverse. I’m not saying if Ted Cruz is elected in 2020, he won’t try.

Sometimes Democrats are accused of not playing hardball in the way Republicans do. What are some aggressive tactics that you would like to see from the Democrats in general, as well as on climate?

I think getting rid of the filibuster in general. But I think there is a fair amount of Democratic reform and institutional reform that Democrats can put forward. The elements that make it easier to vote. Statehood for the District of Columbia, potentially statehood for Puerto Rico. Those are the things that change the power dynamics that Republicans have paid attention to, and I think Democrats have not.

The reversing of a long trend making it hard to be in a union. Those are the kinds of things I do think make a difference over the long term and that Democrats haven’t paid much attention to. Democrats come in, and they want to do health care and they want to do environmental protection or whatever, and the Republicans are coming in and saying, "Let’s pack the courts," which is a better long-term play. And I think their analysis of trying to build permanent power has been stronger, and I think it’s a top-of-mind issue now for Democrats. Hopefully, they’ll be able to do something about it. I think Democrats have never thought much about the courts; now they will. The Republicans are just ruthless.

Should Hillary Clinton have leaned more into climate policy in 2016?

I think she was quite robust in going beyond where Obama was and getting on track to not only meet the Paris goal, but to exceed where Obama had left things. I obviously did the work for Obama, but I was proud of our record, but she amped that up quite substantially, and I think that Biden has built on that. You can see where Biden is today. There were certain demands where I feel that [for] Bernie [Sanders] were easy to toss off, but they were hard to implement. The world is now in a different place; the target has moved from trying to hit a 2-degree-C rise in global average temperatures to 1.5, which means net zero by 2050. That is really the direct result of the [Intergovernmental Panel on Climate Change] 1.5 report, and Biden has embraced that. There is more consolidation around the opinion that we just have to go a lot faster.

Why do you think an increasing number of people are worried about climate change and more willing to do something about it?

It’s the influence of young people making their opinions more known; Democrats definitely moved it into a more salient issue. People always liked clean energy solutions, but it was down the list of priorities. At least among Democratic primary voters, it moved up the list to No. 2 just behind health care. That was not solely the result in the change of demographics, because there are more younger voters in the mix. Older Democratic voters were also moving. It was the result of seeing the direct and immediate impacts of extreme weather. The National Climate Assessment
, in particular, partly because Trump tried to bury it, I think that actually enhanced people’s attention to it.

I think [climate] still is important [to voters]. I think it still is an important issue and one that is going to be a point of real engagement and attention between Trump and Biden, because Trump is so mispositioned on this, having turned his entire government over to a bunch of fossil fuel lobbyists, the rollbacks of over 100 important environmental protections and public health protections, and his disdain for the science, it’s quite harmonic.

He approaches climate the same way he approached COVID. He doesn’t listen to the experts; he kind of treats it as a cultural issue rather than as a security and economic challenge. He thinks he can kind of bully his way through the argument and with disastrous results. People understand that there is a parallel here. It’s a highly motivating issue for younger voters and Latinx voters. It moves votes amongst the people he’s trying to get by scaring them.

I think Democrats can get them by telling the story of what he’s done and what they would do, creating jobs out of the recession. That’s mostly suburban Republican women. You see big movement in that group towards Democratic candidates who want bold action on climate, who are willing to spend trillions of dollars on climate. And up against that, Trump is sort of making fanciful claims that buildings aren’t going to have windows and Democrats are going to take your hamburgers away and blah, blah, blah. People aren’t buying that.

So I think this is an issue that can move votes at the presidential level and down-ballot, as well. We’re urging Democratic candidates up and down the ballot to look at those results and think about the fact that in essence, they’re running against a party that is embracing the past and embracing the fossil fuel lobbyists and have done everything they can to block action. You can move votes on this.