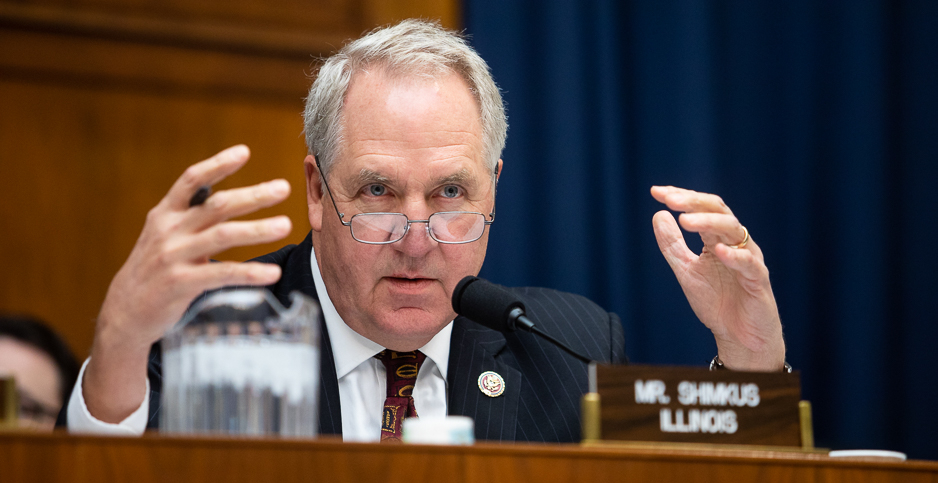 Rep. John Shimkus (R-Ill.), ranking member of the Energy and Commerce Subcommittee on Environment and Climate Change, has been one of Congress' most vocal members on nuclear waste issues. Francis Chung/E&E News

Even with the controversial Yucca Mountain nuclear waste project all but dead, its chief congressional defender is not giving up on the idea.

And if opponents succeed in preventing nuclear waste from going to the site 90 miles northwest of Las Vegas, the U.S. will have to find somewhere else to put it, and so far no state has volunteered.

That’s the message from Illinois Republican Rep. John Shimkus as he prepares to close his congressional career after nearly 25 years representing a state with the most piled-up nuclear waste containers.

The same argument will likely be on display later today during a scheduled talk at the Illinois Institute of Technology, likely one of his last on the issue as a sitting lawmaker.

"It’s never dead, it’s the law of the land," Shimkus said during an exit interview with E&E News last month, where he reflected on Yucca, chemical contamination and climate change.

First elected in 1996 as part of a conservative Republican wave, Shimkus made his mark as a hothead lawmaker, lambasting Department of Energy officials for failing to implement a 1980s law that designated Yucca Mountain as the nation’s sole nuclear waste repository.

Both the Obama and Trump administrations have given up on the site over intense state opposition. In the meantime, more than 80,000 metric tons of spent nuclear fuel piles up across the country.

President Trump’s decision to turn his back on Yucca was particularly stinging for supporters of the repository. Originally, the administration was working to resurrect the site, but the immediate political benefits of opposing Yucca seduced the president.

"I’m just shocked … that we condone that the federal government does not follow the law," Shimkus said. "That is the most egregious thing about this."

‘Wish him the best’

Shimkus’ decadeslong quest featured public beratings of Obama DOE officials. He softened his stance a bit and helped strike a compromise, which secured a bipartisan House vote in May 2018 — 340-72 — on his legislation to jump-start the Yucca Mountain site and authorize interim storage options.

Nevada lawmakers have always been antagonistic. Shimkus has gone to the state at least five times to rally local support for Yucca, only to encounter fierce resistance from the likes of former Senate Democratic leader Harry Reid and Democratic Rep. Dina Titus.

"While I certainly have had many battles over the years with Rep. Shimkus, I wish him the best in his retirement," Titus said in a statement to E&E News about Shimkus’ departure.

If history is any lesson, Shimkus said, any nuclear waste site anywhere in the country will generate the same political battles.

For evidence, Shimkus points to New Mexico and Texas. The governors of those states — one Democratic and the other Republican — have both objected to interim storage plans pending before the Nuclear Regulatory Commission.

Asked about the possibility of an alternative to Yucca, Shimkus said, "I don’t think there is one." There may not even be that much urgency to find one, he added, as nuclear waste keeps piling up at plants around the country.

"Because interim storage is safe, all these locations, no one feels at risk. And I’ve had members say, ‘Let’s make this a big deal, let’s make it like they’re going to glow,’ and [I] said no, I’m not going to distort the facts, so that’s part of the problem," Shimkus said.

"It’s the local residents who have to say it’s time," he added. "I think once they start doing a popular movement to hold elected officials accountable, then you will have some action."

Duncan has expressed an interest in the issue, in part because of his district’s involvement with the Savannah River facility, a legacy DOE Cold War site.

Shimkus said he has already bequeathed to Duncan his years of Yucca-related poster boards and DOE science reports.

"He’s very similar to me, in my observation," Shimkus said. "He’s much more of a fire breather his first couple terms than I was, but he’s more maturing faster, and I’m not going to say he’s mellowing, but he’s watching the policy and he’s trying to be more informed and engaged than just throwing bombs."

Duncan said he’s ready to take up the mantle.

"Congressman Shimkus has been a strong voice in defense of Yucca Mountain. It’s been great to work with him on this important issue not only to Illinois and South Carolina, but to our entire country," Duncan said in a statement.

"I am honored to continue to lead the fight to bring Yucca Mountain to fruition," he said. "It’s a national solution to a national problem, not to mention it’s the law of the land. It’s past due to get it done."

While he became notorious for his Yucca Mountain advocacy, Shimkus’ legacy is likely to be defined by the successful overhaul of the nation’s chemical safety laws.

Shimkus — who represents a large central and southern Illinois district, and is the top Republican on the Energy and Commerce Subcommittee on Environment and Climate Change — has pushed for bipartisan deals on disputes related to coal ash and per- and polyfluoroalkyl substances.

"I’m glad I’m leaving with a major piece of legislation passed — 5 ½ years from start to finish, and the Democrat president signed it," Shimkus said of his 2016 bill to reform the Toxic Substances Control Act for the first time in nearly four decades.

The law sought to hasten the EPA review process of harmful substances. Prior to the update, the federal government placed restrictions on just five chemicals since the 1970s.

The Obama administration called the legislation "a historic advancement for both chemical safety and environmental law."

Shimkus chalked up the bill’s success, at least in part, to luck. The legislative efforts went through fits and starts through the 2010s. In 2013, a major force behind the effort, Sen. Frank Lautenberg (D-N.J.), died.

"The problem was that the EPA was so tied up in knots that both sides felt that that law was dysfunctional, and that was helpful," Shimkus said.

Implementation of the law has proved to be less than bipartisan. Environmental groups and their Democratic allies have remained critical of the Trump administration’s pace and thoroughness in following the revamped law, prompting litigation.

Some of that anger is playing out on the House floor as Energy and Commerce Chairman Frank Pallone (D-N.J.) — who opposed the TSCA rewrite at times during negotiations over concerns it did not go far enough but who did eventually support the bill — is pushing a more stringent bill to ban asbestos (E&E Daily, Oct. 5).

Shimkus doesn’t agree with the implementation complaints. "There were going to be criticisms regardless," Shimkus said. "If Hillary Clinton would have won [the presidency], then the chemical industry would have criticized it. Trump won, so the environmental community is saying it’s bad."

He added, "I’m not sure what’s going on in these things, but I don’t think it’s as politically manipulative as people would like to say."

Shimkus’ subcommittee perch gave him a leading role in opposing Obama administration climate policies, like cap and trade and the Clean Power Plan.

While Shimkus, like much of the GOP caucus writ large, has begun to dip his toes into market-based climate responses, he still stands by his opposition to Obama-era plans because of their impact on fossil fuel jobs and energy rates.

"We weren’t wrong, and in fact, we were right on the politics of it," Shimkus said, citing the Obama climate push as one of two big reasons Republicans took back the House in 2010.

That tepid embrace of the seriousness of climate change, Shimkus said, has more to due with the general public’s acceptance of the impacts of global warming than anything else.

"[Former House Speaker] John Boehner said once you see a group moving in a direction, get in front of them and declare yourself to be the leader. But if you are a leader with no one behind you, you are just a man walking in the park," Shimkus said.

That shift toward action does not purport to support economywide mandates or more federal intervention, Shimkus warned. But there may be room for targeted efforts on transmission and nuclear energy, where bipartisan backing could emerge.

"If they want green power and move it across the country, we need more transmission lines, but [Democrats] want another regulatory hurdle to that," Shimkus said, pointing to their recent $135 billion clean energy and workforce development bill, H.R. 4447 (E&E Daily, Sept. 25).

"They’re not being intellectually honest," he said. "Some of the biggest fights in my district over the past eight years have been the siting of transmission lines, and that’s just power going across my state."

A lifeline to existing nuclear power plants may prove to be the olive branch needed to pick off some Republican support, Shimkus predicted.

"If we can design a system where we have major baseload, and if Democrats want to extort [us] and say it has to be carbon-free, it would be hard for me not to support some venue that would say let’s keep these nuclear power plants open," Shimkus said.