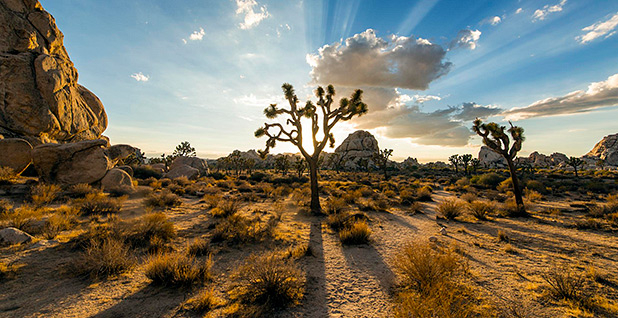 While acknowledging that "wildfire, invasive plants, effects of climatic changes, and habitat loss" all continue to stress the tree found in and around the Mojave Desert, the service concluded the tree remains resilient and in fine shape.

"Because the two species are long-lived, have such large ranges and distributions, mostly occur on Federal land, and occupy numerous ecological settings, we have determined that future … events would not lead to population- or species-level declines in the foreseeable future," the agency stated.

The conclusions reached in the so-called 12-month review rejected a 2015 petition filed by WildEarth Guardians, which sought to add the tree to the ESA list of threatened species (Greenwire, Oct. 1, 2015).

The decision not to list the Joshua tree, along with other ESA decisions announced today, was also made under rules that in some cases differ from those that will apply in the future.

With the Joshua tree, for instance, FWS noted it evaluated environmental conditions and threat factors "approximately 80 years" into the future.

Each of the species had been the subject of an ESA listing petition, with the oldest dating back to 2007.

"Although the lake sturgeon was historically abundant, with populations estimated in the millions in each of the Great Lakes, its decline in recent decades has been rapid," FWS stated.

If the agency ultimately concludes ESA protections are warranted for the lake sturgeon, the new rules would allow publishing of economic impact information along with a listing proposal.

"The Act does not prohibit the Services from compiling economic information or presenting that information to the public, as long as such information does not influence the listing determination," the service stated in its new rules justification.

A potential listing for the lake sturgeon would also trigger critical habitat considerations under the new rules.

The new rules acknowledge that a critical habitat designation may not be "prudent" in rare exceptions.

When designating critical habitat, the new regulations also reinstate the requirement that areas where threatened or endangered species are present at the time of listing be evaluated first before unoccupied areas are considered.