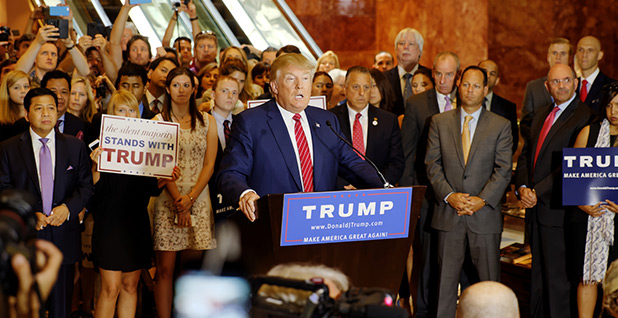 Journalists and advocates are fearful that the incoming Trump administration will clamp down on the public’s access to environmental information.

On the campaign trail, Donald Trump continually railed against what he perceived as a widespread media bias against him. He revoked press credentials for The Washington Post, calling the outlet "phony and dishonest," and banned several other media organizations from his campaign events. He later invited those outlets to return to his events, but the move sparked an outcry from media groups and transparency advocates. The president-elect took flak again last week for refusing to let journalists cover his White House meeting with President Obama, a departure from standard practice.

Trump’s sometimes open disdain for the media has journalists, environmentalists and former government officials fretting that his team might restrict press access to top energy and environmental officials, stifle dissenting opinions of scientists and career staffers at agencies like U.S. EPA, and limit information about environmental policy that’s available publicly.

"I think that there’s certainly reason for concern," said Bobby Magill, president of the Society of Environmental Journalists and senior science writer at Climate Central. Trump "just seems to have some measure of hostility towards transparency into his own activities and into his own campaign, to some degree."

Magill and others stress that it’s too soon to tell how the Trump administration will interact with the press, both from the White House and extending more broadly into agencies with environmental portfolios, like EPA and the Energy and Interior departments.

But they’re warning that early indicators are troubling, given that government officials control a vast amount of information that the press plays a role in disseminating to the public.

"We know that the government provides reams of scientific data and other information that the public relies on," Magill said, including DOE and EPA data about greenhouse gas emissions, weather data from the National Oceanic and Atmospheric Administration, and energy consumption information from the U.S. Energy Information Administration. He said he’s heard concerns from his members.

Some outside observers have been complaining for years about access to information at EPA and other agencies, and what they perceive as unnecessary interference with agency scientists’ ability to speak freely to the media. Journalism groups and transparency advocates who were optimistic at the start of the Obama administration were left disappointed by what they viewed as a heavy-handed approach by political staff to control messaging out of federal agencies.

SEJ accused the Obama administration in 2013 of taking "secrecy to a new level by failing to respond to even many routine inquiries by the news media about what this important agency is doing in regard to human health and protecting the environment."

Under the Obama administration, "it’s been challenging to have access to government scientists," Magill said.

Patrick Boyle — who worked in the press shop in EPA’s Region 3 office in Philadelphia during the Clinton, George W. Bush and Obama administrations — said environmental reporters who dealt with the past two administrations know "just how jealously the people in the White House guard any information that has a message attached to it," including environmental policies.

"I’m not sure that there’s any significant change coming," said Boyle, who retired from EPA in 2010.

Tom Reynolds, who was EPA’s top communications official and worked in communications at DOE and the White House during the Obama administration, is predicting some big changes under Trump.

During the past eight years, "from the president on down, we worked very hard to provide transparency and access to both the public and the media when it came to policy decisions," he said.

Reynolds, who left the administration earlier this year, is expecting a "stark contrast" between Obama and Trump when it comes to transparency. "If history is any indicator, I do not expect a transparent open-door policy when it comes to working with the press and the media," Reynolds said of the incoming Trump administration. "But I would love to be proven wrong."

Given the Trump administration’s pledges to unravel much of the environmental policies federal employees have worked on over the past eight years, many experts are expecting conflicts between agency staffers and their new political bosses.

"The career employees that show up for work every day at EPA strongly believe in the mission that’s at the heart of EPA," Reynolds said. "It’s a science agency based on protecting public health, and that’s clean air and clean water. That runs very counter to the philosophy that the new administration is going to bring. … That tension is going to be problematic" and could demonstrate itself in a lack of access "between the press and the scientists and the researchers who are the lifeblood of the agency."

If there’s a crackdown on information coming out of environmental agencies, some observers predict more federal workers will be looking to speak out without permission.

"There will definitely be more leaking," said Frank O’Donnell, president of Clean Air Watch and a longtime environmental advocate. He noted that has happened when federal staffers have disagreed with administrations’ environmental policies dating back to the Reagan administration.

"There were early plans that the people within the Reagan White House had made to attempt to obliterate things like the Clean Air Act," O’Donnell said. "Word of that did leak out, and they backpedaled once that happened."

One important difference now, O’Donnell said, is that "an awful lot of veteran professional people at an agency like the EPA have retired." He said it will be interesting to watch how a younger generation handles an administration that "steps in the way of what they thought was an unfettered path to issue new regulations."

Boyle doesn’t expect to see many EPA staffers leaking information to the press.

"EPA scientists, bless their hearts, have been gagged for decades. They know better than to go out and talk about environmental policies. That’s not their purview," he said. "What the government chooses to do about it once these people give them the facts remains to be seen."

One possible change under a Trump administration, O’Donnell said, is that agencies could cease leaking information to major news outlets ahead of big announcements.

Historically, when an agency like EPA plans to roll out a big announcement, "it’s leaked to The New York Times or The Washington Post the day before," he said. "I think we may see less of that during a Trump administration."

Some of the big traditional media outlets may be "sidelined a bit," O’Donnell said. "The communication process may be slightly more democratic."

Even those who are wary about the incoming Trump administration’s press policies say they’re waiting to see exactly what happens when the new team comes in Jan. 20.

"We can sit here and we can speculate and prognosticate and all that," said Magill. "People have concerns, but we don’t have any facts right now."

One EPA employee said, "Unless I’m given a real reason to worry, I’m not going to. Environmental laws that we have here aren’t going to go anywhere, I’m fully confident of that."

That person said agency staffers intend to take things "one day at a time, just like we did last administration."