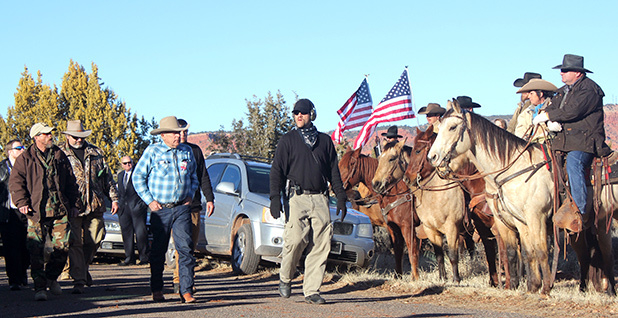 A federal judge today declared a mistrial in the case of Nevada rancher Cliven Bundy, after finding that government prosecutors had failed to provide key information to Bundy and his co-defendants.

Chief U.S. District Judge Gloria Navarro ended the trial against Bundy, his sons Ryan and Ammon Bundy, and Montana resident Ryan Payne five weeks after opening arguments in a trial that has been riddled with questions over government misconduct.

"The court does regrettably believe a mistrial in this case is the most suitable and only remedy," Navarro said, according to Oregonian reporter Maxine Bernstein. Navarro found the government willfully suppressed at least six pieces of evidence that could have been favorable to the defendants.

A Las Vegas Review-Journal reporter indicated that Navarro will not rule until Dec. 29 whether the case will be dismissed with or without prejudice, potentially restricting the government’s ability to bring a new case. The Oregonian reported a new trial date is tentatively set for Feb. 26. Documents were not immediately available from the court.

"Today our prayers were heard and that the current trial against my husband, sons and other defendants was declared a mistrial," Carol Bundy said in a statement. "We wanted a dismissal but are grateful that the truth is getting out. We are a step closer to freedom."

She added, "Although the case is not over and there will continue to be lots of legal back and forth I needed to thank you, on behalf of our entire family for your prayers and support."

Cliven Bundy and his co-defendants faced charges stemming from their 2014 armed standoff with federal officials, sparked when the Bureau of Land Management tried to seize Bundy’s cattle over more than $1 million in unpaid grazing fees and trespassing fines.

Although scheduled to begin in October, the trial has faced numerous delays, caused in part by skirmishes over evidence in the case.

Opening arguments were delayed in November following revelations about a previously undisclosed government video feed of the Bundy ranch during the standoff (E&E News PM, Nov. 7).

The trial was again delayed this month after federal prosecutors revealed a memorandum written by BLM’s former chief agent in charge of the Bundy investigation that asserted key evidence had been withheld from the case.

But an internal BLM review dismissed Wooten’s allegations, finding no evidence that the agency had withheld evidence (Greenwire, Dec. 18).

Federal prosecutors are expected to pursue a new trial in the case. If the trial is dismissed without prejudice, prosecutors will not need to seek a new indictment against the Bundys or Payne.

"None of this undermines the mountain of evidence that can be brought to bear to prove the allegations in the indictment," said Todd Tucci, senior attorney at the Idaho-based law firm Advocates for the West.

Tucci, who is not involved in the trial, described arguments over evidence as a "legal skirmish."

But Tucci said it remains to be seen how the Trump administration will pursue the matter.

"I would be more surprised if they continued to prosecute it than if they threw their hands up," he said. "One would almost expect Cliven Bundy to ride into the Department of Interior on his horse and get a round of applause from the secretary."

A spokeswoman for the Interior Department referred questions to the Justice Department, which did not immediately respond to a request for comment.

Tucci noted that BLM employees and other federal agents could face similar challenges in the future if the government does not pursue the Bundy case.

"This portends really bad things in the future for public lands management: for the ability of BLM to enforce the foundational environmental laws of the American West. If these guys can get away with this, even more so than the Oregon national wildlife refuge [occupation], then all bets are off. This is the Wild West again," he said.