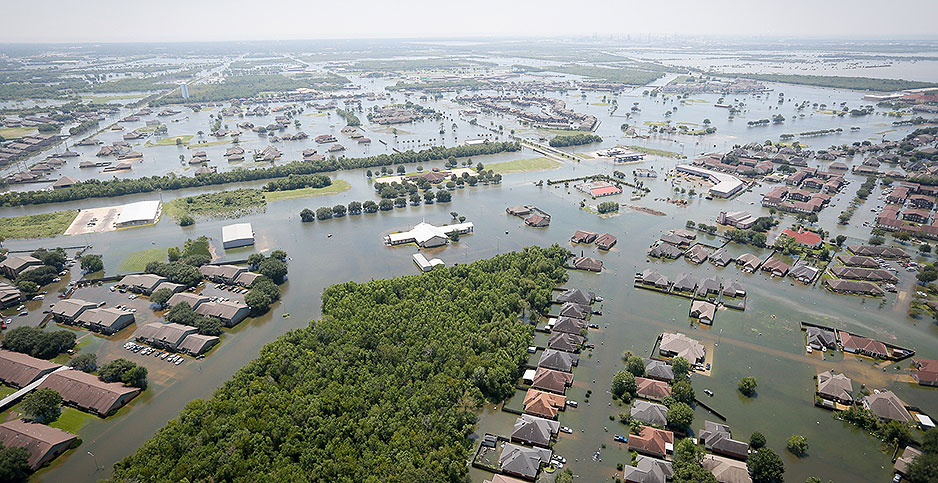 The federal government is liable for flooding of some homes during Hurricane Harvey, a U.S. Court of Federal Claims judge ruled yesterday.

The case highlights the Army Corps of Engineers’ struggle to respond to increasingly intense and frequent storms.

At issue in this case is damage that occurred to homes upstream of the Addicks and Barker reservoirs in Texas, which are owned and operated by the Army Corps of Engineers and consist of U-shaped embankments meant to prevent downstream flooding in Houston.

When the reservoirs were designed in the 1940s, the government bought some land upstream of the dams to hold water. The Army Corps calculated how much land to buy based on rainfall from intense storms in 1935 that the agency did not expect to occur more than once in the lifetime of the reservoirs. But the dams were designed to hold much more water, with the corps deciding at the time that it was unnecessary and cost-prohibitive to buy all the necessary land that could flood, much of which was used for agriculture at the time.

In later years, the Army Corps decided against finishing outlet canals meant to drain the reservoir due to concerns about flooding downstream, which increased the reservoirs’ size. In the 1970s and early 1980s, the areas upstream of the reservoirs began to rapidly urbanize, leading the corps to realize it could eventually have to flood homes upstream from the reservoirs.

When Hurricane Harvey dropped its record 43 inches of rain on the Houston area in August 2017, the Barker and Addicks reservoirs helped prevent an estimated $7 billion in losses downstream, but the resulting flood pools within the reservoirs broke records and went far beyond the federally owned land.

The history of the reservoirs helped convince Senior Judge Charles Lettow, who wrote in his ruling that "the flooding that occurred was the direct result of calculated planning."

"Here, the evidence demonstrates that the corps was aware or should have been aware since the initial construction of the dams and at every point onward, that the flood pools in the Addicks and Barker Reservoirs would at some point (and thereafter) exceed the government-owned land, inundating private properties," he wrote.

The ruling is part of a test case brought by 13 property owners. Lettow’s finding means hundreds more upstream property owners who were also flooded during the storm are now eligible to seek certification as a class and ask for damages.

During a 10-day trial in Houston, which included a court visit to the dams and seven properties, the government argued that it couldn’t be held liable for flooding land located in a county that has always been at risk of inundation during storms, and that Hurricane Harvey was a record-breaking event.

But that argument didn’t hold water with Lettow.

The government also argued that its actions had only temporary consequences because the flooding lasted for only a few days. But the court found that was an unreasonable way to measure the risk. Instead, Lettow said, the "time and duration" of the government’s actions should be measured by the fact that it has a permanent ability to flood properties upstream of the reservoirs.

The case could have broad implications for the Army Corps, which owns myriad flood control structures across the country, said Doug Lamont, who previously oversaw project planning and review for the Army Corps and served as the temporary head of the agency during the beginning of the Trump administration.

Lamont, who now works at Washington, D.C.-based consulting firm Dawson & Associates, noted that the Addicks and Barker reservoirs weren’t designed to handle such an extreme event as Hurricane Harvey, forcing the Army Corps to choose between flooding upstream or downstream communities.

That kind of choice, he said, could become more common, as much of the federal government’s flood control infrastructure was designed more than half a century ago, and climate change is expected to fuel more frequent and powerful storms.

"Typically, in the past, dams and reservoirs were designed based on historical floods," he said. "The quandary we are all in now is, does each extreme event set a new marker relative to new dams that must be raised or infrastructure that must be strengthened?"

Lamont noted that the Army Corps was faced with similar predicaments of when to hold water back and when to release it all along the Mississippi and Missouri rivers last winter and spring as flooding inundated much of the Midwest. While the Army Corps is charged with managing much of the nation’s flood control infrastructure, Lamont said it will be up to Congress to empower any necessary reviews or updates.

"We are experiencing more and more extreme weather events with significantly more precipitation," he said. "These systems can easily be overwhelmed by those events."