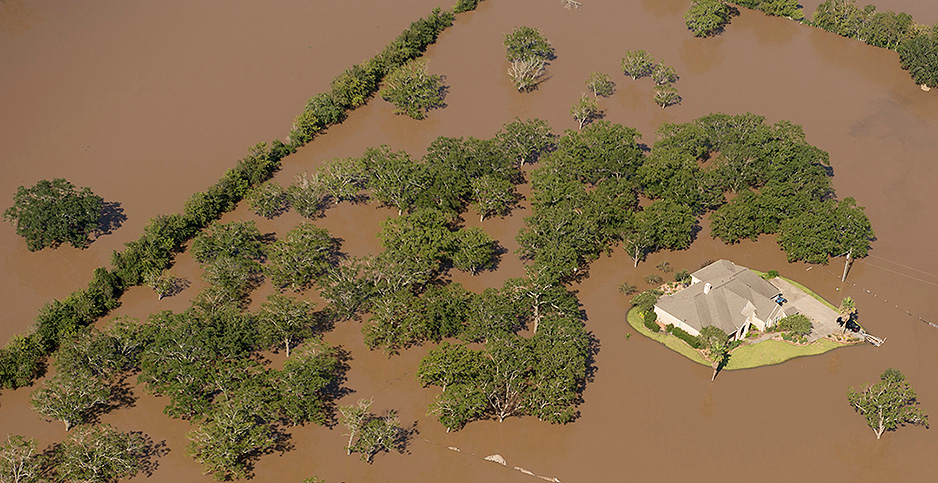 The Army Corps isn't responsible for flooding that damaged about 1,000 homes during Hurricane Harvey, a judge ruled this week. Jason Robertson/Air Force Magazine/Flickr

A federal judge ruled that the Army Corps of Engineers had no legal obligation to protect Texas property owners from the massive flooding caused by Hurricane Harvey in 2017, calling the damage "an act of God … that the government could not conceivably have controlled."

The decision Tuesday is a potentially important victory for the Army Corps as it faces increasing legal claims from people who say their properties were flooded by water controlled by the agency’s network of dams, levees and reservoirs.

A U.S. Court of Federal Claims judge ruled against Houston-area residents and businesses whose properties were flooded in August 2017 when the Army Corps released millions of gallons of water from two swollen reservoirs west of Houston as Harvey dumped record rainfall on the region. The agency built the reservoirs and adjacent dams in the 1940s to protect downtown Houston from flooding.

"This storm, which overwhelmed the system’s capacity was classified as a once in 2000-year event … which means the last such event occurred during the life of Jesus!" Senior Judge Loren Smith wrote.

The release overflowed a receiving channel and flooded 11,000 properties located immediately downstream of the reservoirs, Rand Nolen, an attorney for the plaintiffs, said in an interview yesterday. The Army Corps faced hundreds of millions of dollars in liability from the lawsuit and potentially additional litigation arising from other floods if it lost the case.

The decision contrasts to a ruling by the same court in December that held the Army Corps liable for flood damage during Harvey to properties located just upstream of the reservoirs. In that case, a judge found that the damage was caused by the Army Corps — not by the hurricane — because the agency failed to make the reservoirs large enough and knew that a major storm would cause flooding on adjacent private property (Climatewire, Dec. 19, 2019).

The distinction between holding the Army Corps liable for its bad decisions but not liable for unprecedented storms is essential as climate change intensifies rainfall and flooding.

"The events of Houston are a harbinger of events that will occur more frequently in the future as a result of climate change. We’ll be experiencing more and more heavy rainfall events," said John Echeverria, an environmental law professor at Vermont Law School.

Nolen assailed Smith’s decision and said he and the other plaintiffs’ attorneys are considering an appeal.

"The folks that I represent were sitting in their homes … and they did not do one thing wrong. It’s no different from if you took a bulldozer and knocked a house down. They flooded their homes," Nolen said of the Army Corps.

The ruling is the latest in a series of lawsuits accusing the Army Corps of mismanagement as it struggles to control increasingly intense flooding while meeting other requirements such as protecting wildlife, maintaining navigation channels and providing drinking water.

In December, Mississippi’s secretary of state sued the Army Corps over damage to the state’s seafood and tourism industries that occurred last year when the agency opened a Mississippi River spillway. When the Army Corps opened the Bonnet Carré Spillway repeatedly in 2019 to prevent the river from flooding New Orleans, it dumped billions of gallons of polluted water into the region.

In March, dozens of property owners in Arkansas sued the Army Corps for flooding that they say resulted from the agency’s mismanagement of a reservoir-and-dam system in the White River Basin in northern Arkansas.

That lawsuit is similar to a landmark case brought by 372 property owners adjacent to the Missouri River who claimed the Army Corps deliberately flooded them when it scaled back flood control on the river in the early 2000s to promote other goals such as environmental protection. A Federal Claims Court judge held the Army Corps liable in 2018 and will next rule on damages to be paid.

In the case decided Tuesday, Smith said the plaintiffs erroneously suggested that the two reservoirs near their properties would protect them from flood damage.

"Plaintiffs’ claims are essentially that they were entitled to perfect flood control, simply because government set up a flood control system to help protect residents in the Houston area," Smith wrote.

"When the government undertakes efforts to mitigate against flooding, but fails to provide perfect flood control, it does not then become liable," Smith added. "The Corps cannot be held liable when an Act of God inundates a plaintiff’s real property with flood waters that the government could not conceivably have controlled."

"Just because the government built a dam and tried to do something doesn’t mean it’s on the hook for the flood damages that occurred as a result of Hurricane Harvey," Echeverria said. "It did the best it could, and the storm completely overwhelmed the system."

Nolen, the lawyer, disputed that the Army Corps did the best it could.

Documents show that the Army Corps knew that the receiving channel for the reservoirs could not handle the amount of water that was released during Hurricane Harvey, he said.

"When you exceed the capacity of the channel, water spills out of the channel and into the homes," Nolen said. "They knew exactly which houses would flood when they did it. They knew since the 1980s exactly who would be flooded, the blocks and in most cases the addresses."