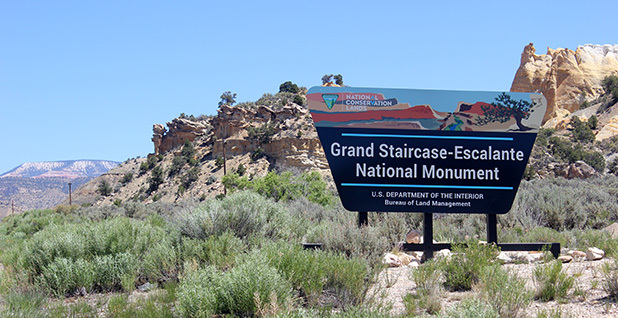 Environmentalists and American Indian tribes notched a significant set of wins today in their ongoing fight over the Trump administration’s decision to shrink Grand Staircase-Escalante and Bears Ears national monuments in Utah.

The U.S. District Court for the District of Columbia rejected the federal government’s request to move litigation over the monuments to a district court in Utah. Judge Tanya Chutkan ruled from the bench that the plaintiffs had successfully argued the case belongs where they filed it in Washington, D.C.

The ruling is a huge victory for defenders of the Obama-era monuments who see D.C. as the more convenient — and perhaps more favorable — venue.

"D.C. is the obvious place to bring claims in a case like this where the issue is the scope of the president’s authority," Earthjustice attorney Heidi McIntosh said outside the courtroom today.

Chutkan, an Obama appointee, also ordered the Interior Department to provide notice to environmental groups, tribes and other plaintiffs of any ground-disturbing activities within the former monument boundaries.

The parties still have to reach an agreement on the specifics of the notice requirement. Still, it represents a big win for plaintiffs trying to assess exactly what type of development the Trump administration is allowing to move forward within the original monument footprint.

"I don’t think plaintiffs should have to take the chance of just not finding out," Chutkan said during a status conference this morning.

Critics of the Trump administration have raised concerns about mining claims and other exploration activities potentially occurring within the original boundaries. They argue that Interior should not allow development to move forward in those areas while the litigation over the legality of the shrinking of the monuments continues (Greenwire, June 20).

The consolidated challenges to the reduction of both monuments have been moving slowly through the district court since last year. Now, the case is set to speed up. Chutkan set a swift schedule for upcoming motions to dismiss. They’ll likely be fully briefed before Thanksgiving, setting up a court decision late this year or early next year.