Judge on landowners’ plight: ‘I won’t say the word “screwed”‘ 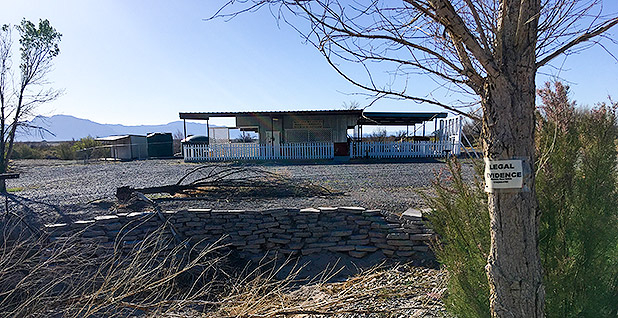 In 2010, the Fish and Wildlife Service, which manages all of the surrounding land, rerouted the channel in a restoration project to help the Ash Meadows speckled dace, an endangered fish that lives in the area’s warm springs.

The mood was decidedly tamer during yesterday’s hearing, where just five spectators — including one reporter and one court employee — listened to more than two hours of technical arguments involving property rights, water law and hydrology.

Judge Elaine Kaplan must decide whether to grant the government’s motion for summary judgment rather than allowing the case to proceed to trial.

The church’s claims are twofold: that the government’s elimination of streamflow on the land without payment amounted to an unconstitutional taking of vested water rights, and that the diversion project’s contribution to flooding was also a taking.

The two lawyers from DOJ’s Environment and Natural Resources Division also attempted to poke holes in the Fuenteses’ flooding claims, dismissing the plaintiffs’ expert testimony as unsubstantiated and noting that the broader area is prone to flooding.

"Plaintiffs would like this court to believe … that there was never flooding on that part of the property," DOJ attorney Davené Walker said, adding that the area is part of a flood zone and has a well-documented history of such events.

Kaplan, an Obama appointee, agreed with the government that Ministerio Roca Solida’s expert testimony appeared "a little thin," but she questioned whether it would be appropriate to resolve the case in favor of the United States at this stage, without allowing the church to make its case at trial.

She also empathized with the Fuenteses on their loss of the stream, regardless of whether FWS’s project was lawful.

"I won’t say the word ‘screwed,’" she said of the landowners, eventually landing on the word "injured."

The judge added that she’s never heard a water rights case or a flooding case before and will need some time to consider the competing evidence.

"Your Honor’s more than welcome to come out to the property," Brown said, "so you can make your own conclusion."