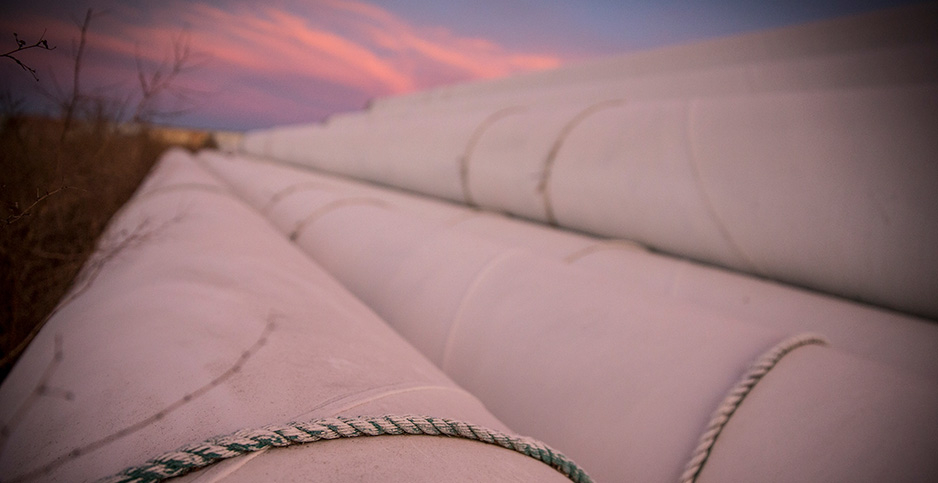 Miles of unused pipe, prepared for the proposed Keystone XL oil pipeline, sit in a lot outside Gascoyne, N.D., in this 2014 file photo. Andrew Burton/Getty Images

A federal judge last week overrode the objections of the Biden administration and kept alive a lawsuit challenging presidential authority to issue cross-border permits for pipelines.

Chief Judge Brian Morris of the U.S. District Court for the District of Montana said the case against former President Trump’s 2019 permit for the now-suspended Keystone XL pipeline to traverse the U.S.-Canada border can continue — even after President Biden issued an executive order axing the approval.

"Although President Biden revoked the 2019 Permit, the possibility remains that he, or a future president, could issue unilaterally another permit," Morris wrote in a Friday order.

A decision to revive Keystone XL’s permit, he added, could come without any warning.

Trump had issued the presidential permit for the 1,200-mile Keystone XL pipeline after Morris previously tossed out a 2017 State Department approval for the border-crossing segment of the crude oil conduit.

The Indigenous Environmental Network and the North Coast Rivers Alliance sued, alleging that Trump’s permit violated the property and commerce clauses of the Constitution. The groups unsuccessfully sought to block construction of the 1.2-mile border segment.

In a separate lawsuit over a key water permit for Keystone XL, the Biden administration last month told the 9th U.S. Circuit Court of Appeals that the case was no longer relevant in light of the executive order, which has prompted developer TC Energy Corp. to stop work on the pipeline (Energywire, May 6).

The Biden team’s request in the 9th Circuit case — along with a separate lawsuit against the executive order — led Morris to call for a briefing on whether to drop the cross-border permit litigation.

Morris has said the Texas case "raises substantially similar constitutional issues," which have not been resolved by Biden’s order.

Even though the Biden administration had said it does not plan to reauthorize Keystone XL, Morris last week asserted that the court still had authority over a "live dispute," since the case involves a physical pipeline that he could order TC Energy to remove.

The Biden administration could have instead issued a declaration that the president lacked authority under the Constitution to "personally issue a cross-border pipeline," which would have blocked similar action, even by a future White House, Morris said.

"Such relief goes beyond the injunctive relief of the court-ordered removal of a physical pipeline infrastructure," he said.