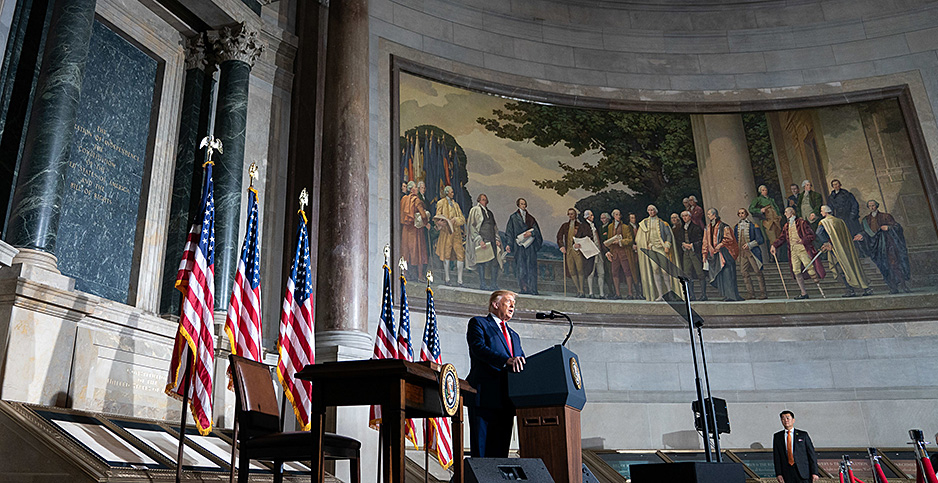 President Trump during remarks at the National Archives in September about patriotic education. That month he also signed an order against certain diversity training at federal agencies. Joyce Boghosian/White House/Flickr

Judge Beth Labson Freeman of the U.S. District Court for the Northern of District of California agreed with LGBTQ advocacy groups that argued sections of the order pertaining to federal contractors and grants should be put on ice.

"The Court finds that Plaintiffs have demonstrated a likelihood of success on their Due Process claim challenging Sections 4 and 5 of the Executive Order as void for vagueness," wrote Freeman, an Obama appointee.

The judge found that the Santa Cruz Lesbian and Gay Community Center and other challengers in the case did not have standing to fight other aspects of the executive order, including provisions dealing with agencies’ training for their own staff members.

Prior to Freeman’s decision, the groups had agreed to narrow their challenge to the parts of the Trump order that directly injured them.

The community center and other groups had been hired by the federal government to conduct diversity trainings as the country reckoned with systematic racism following the killing of George Floyd in Minneapolis in May.

The groups alleged the Trump order "unlawfully labeled much of their work as ‘anti-American propaganda’" and required them to censor themselves or lose federal funding.

The Department of Justice declined to comment on the lawsuit.

The order also sought to ban trainings for federal contractors, which extend far beyond the federal government and include universities.

Many in academia and Democrats on Capitol Hill pushed back. House Energy and Commerce Chairman Frank Pallone (D-N.J.) decried the fact the order led to the cancellation of environmental justice speakers at EPA.