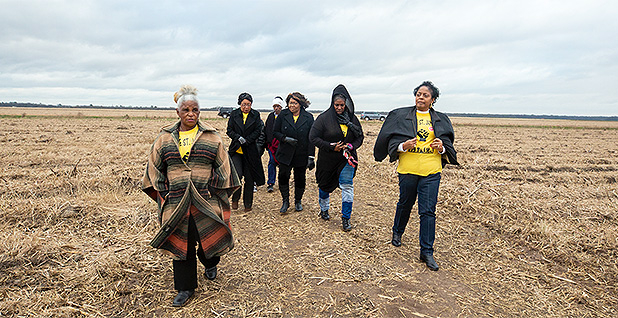 A state court dealt a fresh blow this week to developers of a proposed petrochemicals complex along an 85-mile stretch of the Mississippi River known as "Cancer Alley."

In a verbal ruling, Judge Trudy White for Louisiana’s 19th Judicial District Court said regulators must do a better job of considering the impact of the $9.4 billion Formosa Plastics Group facility on predominantly Black communities near the St. James Parish, La., site.

White closed a hearing Wednesday by saying that environmental racism exists throughout the state’s institutions, according to attorneys who were present for the Zoom proceedings.

The judge sent the Louisiana Department of Environmental Quality back to work on air permits for the Formosa plant and instructed the state to conduct a stronger analysis of environmental justice impacts.

"Environmental justice got its day in Louisiana," Earthjustice attorney Corinne Van Dalen said in a statement. "The judge made clear that the state will no longer be able to ignore African American residents in Cancer Alley and the environmental racism that they have had to bear."

A spokesperson for FG LA LLC, Formosa’s Louisiana division, said the company plans "to explore all legal options" in response to White’s decision.

"The Court appears to have ruled on the merits of the case before all parties in the matter — including FG and LDEQ — had filed briefs detailing the facts," Janile Parks, FG’s director of community and government relations, said in a statement.

Parks added that the company and the state were not scheduled to file briefs in the case until next month.

At issue in Wednesday’s hearing was Tulane Environmental Law Clinic’s motion to intervene on behalf of local resident Beverly Alexander. The motion called on the court to consider evidence that LDEQ had analyzed outdated information from EJSCREEN, an EPA tool that merges environmental and demographic data to pinpoint vulnerable communities.

"She is the first judge to call out the racial injustice issues that were presented by us and the petitioners in the case," Jordan said.

LDEQ press secretary Greg Langley said the department is reviewing the ruling and considering its options.

This week’s ruling isn’t the only legal stumbling block for the Formosa project.

White’s decision follows a federal court filing this month by the Army Corps of Engineers in which the agency said it would take a second look at its permit allowing Formosa to carry out dredge-and-fill activities as it develops the 2,400-acre complex (Greenwire, Nov. 5).

Formosa previously announced that it would delay construction due to the coronavirus pandemic.

In addition to posing a threat to the health of residents, who are already more vulnerable to cancer as a result of exposure to pollution spewed throughout "Cancer Alley," there is evidence that the Formosa complex contains the remains of enslaved people who worked on the sugar plantations that were once located on the site.

St. James residents secured a court order this summer to visit their graves of their ancestors on Juneteenth, which commemorates the day slavery ended in the United States on June 19, 1865.

Sharon Lavigne, founder of the faith-based advocacy group Rise St. James, said she was encouraged by White’s decision this week but plans to continue the fight.

"This is the beginning of the end for Formosa," she said.