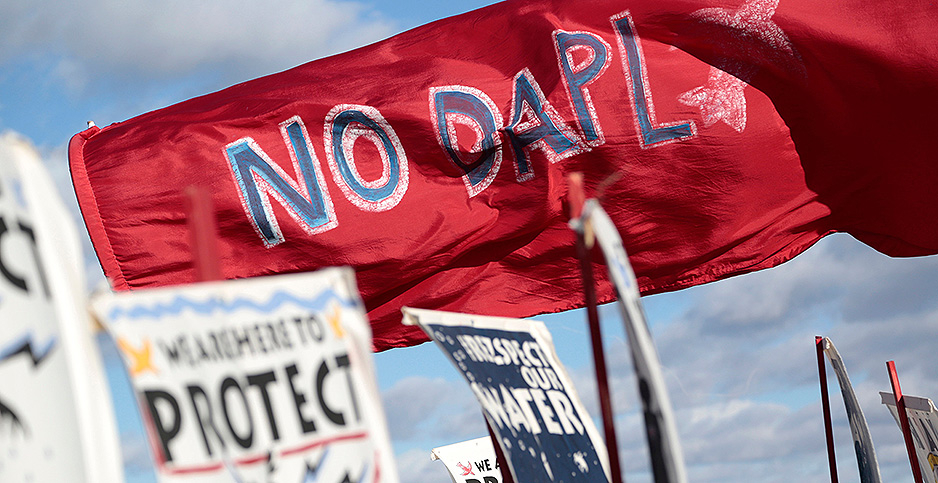 Signs and banners during a 2016 rally against the Dakota Access pipeline in Cannon Ball, N.D. A federal judge today ordered the pipeline to shut down. Terray Sylvester/VWPics/agefotostock/Newscom

A federal judge today ordered operation of the Dakota Access pipeline to be halted and emptied of oil by Aug. 5 until developers conduct a more robust environmental analysis, which is expected to take more than a year.

Marking a significant delay for developer Energy Transfer Partners LP, U.S. District Judge James Boasberg said the oil conduit must be closed until the Army Corps of Engineers addresses violations of the National Environmental Policy Act that occurred when the agency granted developers an easement to build the pipeline under Lake Oahe (see related story).

Boasberg, an Obama appointee, found in March that the Army Corps violated NEPA by determining an environmental impact statement was unnecessary.

The judge’s order essentially halts operation of the 1,172-mile Dakota Access line for more than a year.

"Clear precedent favoring vacatur during such a remand coupled with the seriousness of the Corps’ deficiencies outweighs the negative effects of halting the oil flow for the thirteen months that the Corps believes the creation of an [environmental impact statement] will take," wrote Boasberg.

The developer, Energy Transfer, is one of the country’s biggest pipeline companies, a sprawling empire with 86,000 miles of pipe and petroleum facilities. CEO Kelcy Warren co-founded the company in 1996 and built it up from a regional pipeline network in Texas.

Warren is also a backer of President Trump’s reelection bid and hosted a dinner for the campaign last month in Dallas (Energywire, June 12).

DAPL was built to move crude oil from North Dakota’s Bakken Shale to refineries in the Midwest and Gulf of Mexico. The pipeline gained national attention when protests erupted during construction in 2016, with thousands of demonstrators camping out to oppose the pipeline as construction moved closer to Lake Oahe.

The large reservoir is behind a dam on the Missouri River that stretches between North and South Dakota. It is a half-mile from the Standing Rock Indian Reservation and supplies water to the Standing Rock Sioux Tribe.

In December 2016, with protests in the headlines, the Obama administration declined to grant a final permit for the pipeline to cross under the lake.

Trump, who has business and political ties to Warren, reversed course and issued an executive order accelerating construction of the oil pipeline. It now carries nearly 5% of the oil produced every day in the United States.

In March, Boasberg found the Trump administration’s analysis of the environmental effects of the pipeline to be insufficient. He said the analysis, done by the Army Corps, glossed over warnings from experts about "leak-detection systems, operator safety records, adverse conditions, and worst-case discharge" (Energywire, March 26).

Boasberg ordered the agency to take a more expansive look and prepare a more comprehensive report, or EIS.

In a client note this morning, ClearView Energy Partners LLC said the research firm did not expect the EIS to be completed before April 2021.

"While Judge Boasberg refers to the structure of an EIS review as the basis for his conclusion, we think that he may also have had in mind the history of how this case shifted dramatically with the electoral results in 2016," the note read, adding that if presumptive Democratic nominee Joe Biden secures the White House later this year, an EIS that disapproves reinstating DAPL’s permits is possible.

Energy Transfer and the Army Corps did not immediately respond to a request for comment. The company’s stock sank more than 8% this morning, from $7.10 at open to $6.46 at 12:50 a.m.

David Holt, president of the Consumer Energy Alliance, whose membership includes oil and gas trade groups and companies, said the judge’s ruling was "outrageous" and that it sets a "dangerous precedent."

"In essence, a judge can shutdown and issue a ‘do-over’ on the permitting for any federally permitted or approved project," Holt said in a statement today, adding that DAPL has been "safely operating" for almost three years and underwent years of public review, agency input and more.

"Shutting down the Dakota Access Pipeline would have devastating consequences to North Dakota and to America’s energy security," Cramer said in a statement.

"The Army Corps of Engineers needs to move quickly to finalize another review and ensure continued operation of the pipeline," Hoeven said in a statement.

The Department of Energy did not immediately respond to a request for comment this morning.

Mike Sommers, president and CEO of the American Petroleum Institute, called for reform of the "broken" U.S. permitting system in a statement.

Green groups welcomed the temporary shutdown of DAPL, as well as the cancellation of the Atlantic Coast project, and said they reflected the failures of the Trump administration’s fossil fuel agenda.

"Fossil fuels are dying, and there is little that Donald Trump can do to save them," Jones said in a statement.

Catherine Collentine, associate director of the Sierra Club’s Beyond Dirty Fuels campaign, said the judge’s ruling is "a testament to the perseverance of the Standing Rock Sioux," and she called on Energy Transfer to ditch its expansion plans and close DAPL "for good."