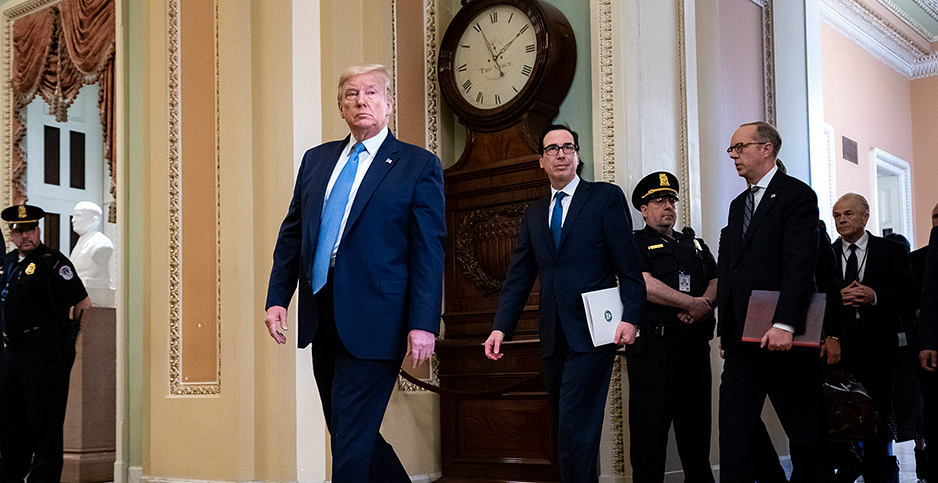 A federal court struck down two major arguments in the Trump administration's effort to halt a cap-and-trade program between California and the Canadian province of Quebec. President Trump is seen in the Capitol on Tuesday. Tia Dufour/White House/Flickr

A federal judge in California ruled yesterday that the state’s cap-and-trade agreement with Quebec does not run afoul of constitutional rules on foreign treaties.

Senior Judge William Shubb for the U.S. District Court for the Eastern District of California shot down two claims that the Trump administration raised challenging the constitutionality of a deal between the Golden State and the Canadian province to create a cross-border carbon market.

The deal linked California’s and Quebec’s cap-and-trade programs in an effort to incentivize emissions reductions. Justice Department attorneys challenged the pact for threatening national authority, arguing that the deal constituted a treaty or compact that requires congressional approval.

Shubb, a George W. Bush appointee, said the agreement did no such thing.

"As the Supreme Court has taught in other cases, in the Article I context, ‘treaty’ is a term of art," he wrote in his 33-page opinion. "Not all international agreements may be ‘treaties’ in the constitutional sense."

Shubb added that the agreement wasn’t drafted for the sake of war or peace, nor does it give up any kind of power to one party or the other.

The government raised two additional claims against the deal between California and Quebec — that the pact interferes with foreign affairs and foreign commerce — but did not file a motion for summary judgment on those grounds.

In a letter to the court justifying why the government only chose to seek a ruling on two of the claims it raised in its initial complaint, Justice Department attorneys said they would litigate the foreign affairs and commerce clause claims if Shubb ruled against the government on the other two counts.

Environmental groups that backed California officials in court said they would continue to fight the Trump administration’s challenge to the cap-and-trade program.

"The Trump administration continues to have its shaky legal positions rejected in court," said David Pettit, senior attorney at the Natural Resources Defense Council. "The judge clearly saw this as a lawsuit filed in anger and not based on a valid legal theory."

DOJ yesterday declined to comment on its next steps in the case.

The closely watched litigation is expected to shed new light on the legality of agreements between states and foreign bodies (Climatewire, March 11).