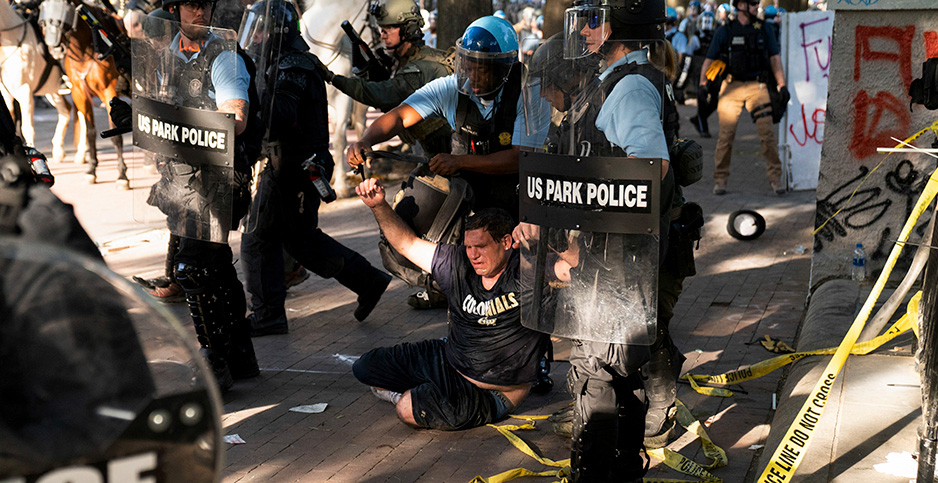 Police detaining a man on June 1, 2020, as they rushed protesters while clearing Lafayette Square. Ken Cedeno/Reuters/Newscom

Former President Trump and other federal defendants in a lawsuit filed by Black Lives Matter D.C. cannot be sued for monetary damages for their handling of a protest that erupted into violence outside the White House on June 1, 2020, a U.S. judge ruled yesterday.

Judge Dabney Friedrich of the U.S. District Court for the District of Columbia said there’s no evidence that Trump and other federal officials, including then-acting Park Police Chief Gregory Monahan, acted illegally in stopping the protest at Lafayette Square.

"The defendants are entitled to qualified immunity as the plaintiffs have not plausibly alleged a violation of law," wrote the judge, whom Trump appointed to the D.C. bench in 2017.

Defendants in the suit comprised Trump, Monahan, former Attorney General William Barr and dozens of others involved in planning the police response. Black Lives Matter, which filed the suit along with the American Civil Liberties Union of the District of Columbia, accused the Trump administration of conspiring with federal agencies to disrupt the protest.

In dismissing most claims in the lawsuit, the judge disagreed, ruling that there was no evidence of a conspiracy and that Black Lives Matter D.C. as a group "fails to demonstrate standing as an organizational plaintiff."

Scott Michelman, legal director for the ACLU of the District of Columbia, said the ruling was "a stunning rejection" of constitutional values and the rights of protesters and "effectively places federal officials above the law."

"We plan to evaluate all our legal options to ensure that protesters cannot be wantonly attacked at the whim of a federal official," he said.

Park Police and other federal officers used smoke bombs, tear gas, shields and batons to clear a crowd of largely peaceful protesters who gathered at Lafayette Square to demonstrate against the police killing of George Floyd in Minneapolis in late May of last year (Greenwire, June 2, 2020).

The incident sparked a public outcry and congressional hearings as critics accused the Park Police of using excessive force against the protesters. Two Park Police officers were reassigned after a video showed them attacking two Australian journalists with a baton and shield.

The judge said part of the lawsuit could proceed, including a challenge on restrictions on protests at Lafayette Square and against Arlington County, Va., and D.C. police who participated in the crackdown.

Michelman also criticized the judge’s decision for making a distinction between federal and local law enforcement officers involved in the operation.

"Congress should plug this dangerous gap in our system of constitutional remedies by legislating that federal officers, no less than state and local ones, can be sued when they violate individuals’ rights," he said.