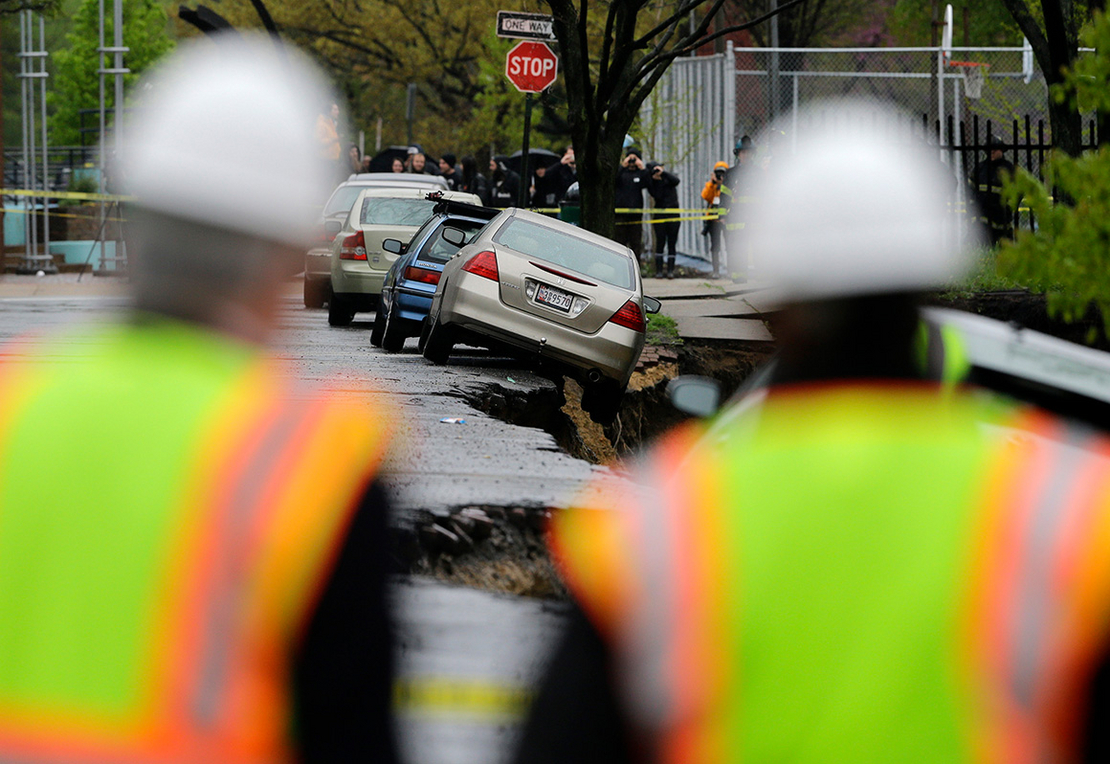 Emergency officials approach cars on the edge of a sinkhole in the Charles Village neighborhood of Baltimore in 2014. The city is waging a legal battle against the oil industry over damages from climate change. AP Photo

During oral arguments, three judges of the 4th U.S. Circuit Court of Appeals repeatedly quizzed an attorney for BP PLC and other oil and gas companies on why Baltimore’s case asking industry to pay up for climate impacts belongs before federal — rather than state — judges.

It’s a question that has stymied court action on lawsuits by state and local governments that are seeking industry compensation for spewing planet-warming emissions. The issue even came before the nation’s highest bench last year.

Baltimore’s case has “an interstate and indeed an international component because of the pervasive role of the federal government in regulating global climate change,” said Kannon Shanmugam, a partner at Paul, Weiss, Rifkind, Wharton & Garrison LLP, representing the oil companies. “Baltimore in our view can’t plead around the body of case law applying federal common law to similar claims.”

At one point, Shanmugam said that the financial relief Baltimore and other cities and states are seeking from the industry to deal with flooding and rising sea levels could be in “the billions” and “render entirely impracticable any further production on the outer continental shelf.”

But Judge Stephanie Thacker, one of 4th Circuit judges that heard the Baltimore case for the second time yesterday, questioned whether the companies’ argument was so broad that it would mean that any case involving climate change or global emissions “would always be federal jurisdiction, no matter what the claims are actually in the complaint.”

Shanmugam replied that in the oil companies’ view, “the causes of action don’t matter as long as the plaintiff’s theory rests centrally on the production and sale of fossil fuels and the use of fossil fuels.”

She also questioned Shanmugam’s argument that the Clean Air Act would actually displace federal common law once Baltimore’s case moves beyond the jurisdictional issue and is argued on the merits.

“That seems a circular argument that, for at least for me, defies logic,” said Thacker, an Obama appointee.

Baltimore originally filed its climate liability lawsuit against BP, Exxon Mobil Corp. and 24 other oil companies in state court in 2018, but the energy companies moved the case to federal court, where the firms believe they face better odds.

The 4th Circuit in March 2020 rejected industry’s move, but they heard the case again yesterday after the Supreme Court examined Baltimore’s case and ruled last year that federal appellate judges could consider a broader range of factors when deciding whether liability lawsuits should be heard in state or federal court.

The justices then sent the 4th Circuit back to work on the jurisdictional question in Baltimore’s challenge.

Nine other climate liability cases were sent back to circuit courts across the country after the Supreme Court ruling, and the 9th U.S. Circuit Court of Appeals is scheduled to hold arguments Feb. 18 in a similar challenge by Hawaii (Climatewire, Jan. 13).

Victor Sher, of the law firm Sher Edling LLP representing Baltimore, pointed yesterday to the 4th Circuit’s earlier ruling in favor of the city and said his client’s allegations are purely based in state law.

“There is no necessary element of federal law, regulation, policy, action, conduct, contract,” he said.

Thacker interjected, asking Sher about Shanmugam’s contention that the effect of Baltimore’s case would go beyond Maryland’s borders and that its goal “appears to be to redress global climate change.”

Not so, Sher said, adding the case “sadly cannot address global climate change. It’s focused very narrowly on a past pattern of conduct based on deception and failure to warn.”

He argued that the case is based on the companies’ failure to warn the public about the danger of burning fossil fuel, “abetted by a sophisticated disinformation campaign.”

He said the case seeks damages from that conduct and that “policy issues, future forward-looking conduct are not part of either the remedy or the claims for relief.”

The judges also parried with the lawyers over the oil companies’ insistence that that case must be heard by federal judges because Baltimore’s “alleged injuries” are connected to the production of oil and gas from the outer continental shelf and thus subject to a 1953 federal law that regulates that production.

Shanmugam argued that the Baltimore claims have a “sufficient nexus” with the companies’ operation on the outer continental shelf to justify the case being heard at the federal level. He argued that the companies are “among the world’s largest fossil fuel producers” and that a significant amount of their production takes place in federal waters.

That drew a question from Chief Judge Roger Gregory, who asked if Shanmugam was claiming that “basically any suit” involving a company’s ability to engage in gas or oil exploration would merit federal jurisdiction.

“That could be any suit where you have a large judgment against you that could affect operations,” said Gregory, a Clinton and George W. Bush appointee.

Shanmugam said there are court rulings that show “evidence of just how broadly courts have applied this principle.”

He argued that the relief Baltimore seeks “would deter, if not render entirely impracticable any further production on the outer continental shelf. The relief that’s being sought here by Baltimore is so extraordinary, potentially billions of dollars in compensatory and punitive damages.”

Judge Henry Floyd asked Sher whether it gave him “pause” that he used the word “production” in Baltimore’s complaint, raising questions about the outer continental shelf.

“Wouldn’t you be better off just to delete ‘production’ from your complaint? Then I don’t know what they’d have to fuss about,” said Floyd, who was appointed during the Obama administration.

Sher replied: “Well, they’d find something, I’m sure, your honor.”

He said that even if there were federal issues, “the state court will be entirely competent to hear them and resolve them.” Sher added that the Supreme Court has considered it an “important principle of federalism to let state courts do that and not appropriate the rule exclusively in the federal court.”

Advocates for the state and local climate challengers hailed the 4th Circuit hearing, noting that before the Supreme Court issued its decision last year, federal appeals courts had largely ruled in favor of keeping the liability cases at the state level.

“Judges so far have consistently rejected Big Oil’s efforts to mischaracterize these cases, and it was clear again today that the Fourth Circuit panel was skeptical of the companies’ arguments,” Richard Wiles, president of the Center for Climate Integrity, said in a statement.

But the Manufacturers’ Accountability Project, an initiative of the National Association of Manufacturers that opposes climate liability litigation, said the 4th Circuit arguments showed that the cases are subject to federal jurisdiction.

“What became clear is that this case is about the production of fossil fuels, you can’t just remove the word ‘production’ from the complaint,” said Phil Goldberg, the project’s special counsel. “It’s about the worldwide emissions of fuels and things that cause climate change, which is inherently federal.”

The 4th Circuit is expected to issue its ruling in the coming months.

Correction: Due to an editing error, an earlier version of this story said that Chief Judge Roger Gregory had asked Victor Sher about the proper jurisdiction for lawsuits dealing with gas or oil exploration. Gregory asked that question of Kannon Shanmugam.