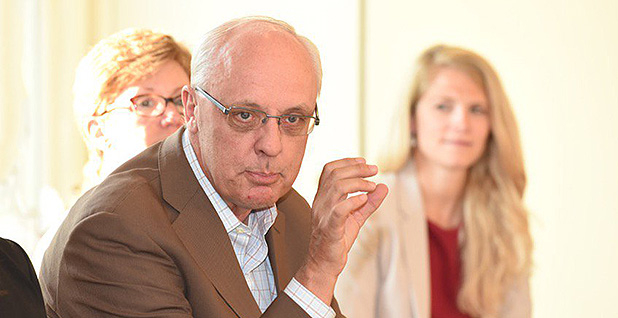 A former senior George W. Bush administration official is warning that President Trump’s environmental and climate regulatory rollbacks are vulnerable to reversal by the courts.

John Graham, a former head of the White House Office of Information and Regulatory Affairs and dean of public and environmental affairs at Indiana University, analyzed the first two years of the Trump administration.

The president has made cutting regulatory "red tape" a key feature of his presidency and has credited efforts to reverse Obama-era rules for spurring economic prosperity.

But Graham and co-author Keith Belton, director of the Manufacturing Policy Initiative at Indiana University, detail how the administration’s efforts are already facing setbacks.

"I think it will be a very tough review process for the Trump administration," said Graham.

The paper is titled "Trump’s Deregulatory Record" and was commissioned by the right-leaning American Council on Capital Formation.

Graham and Belton point out not only problems with the process of how the administration is justifying regulatory repeals but also the challenge of defending the changes before district and appellate court judges appointed by Democratic presidents.

The authors analyzed a breakdown of rulemaking-related litigation compiled by the Institute for Policy Integrity at New York University. Of the 30 cases reviewed, judges favored the administration in only two.

The study looked at who appointed the judges who ruled against the administration in 18 instances. They found that judges picked by Democratic presidents drove those decisions.

In 10 other cases the federal government "capitulated before a judicial decision was issued."

None of the cases challenging rule repeals has reached the Supreme Court, with five of nine justices appointed by Republican presidents.

"It is apparent that the Trump administration must face the reality that, unless a case is heard by the U.S. Supreme Court, the outcome is likely to be influenced by judges that were appointed by Democratic presidents," the authors wrote.

The report authors note the administration has lost court challenges to its deregulation in three main areas.

In most of the 18 cases where judges ruled against the administration, they disagreed with the Trump team’s approach of delaying or suspending the effective date of an existing rule pending replacement or repeal.

Courts have also called out the administration for not providing adequate analyses supporting a repeal or replacement of an existing rule and for not adequately considering foregone benefits that result from rolling back a regulation.

Graham suggested that because the science supporting climate change has strengthened in recent years, courts may require EPA to reopen its endangerment finding to further account for the impact of warming global temperatures on human health and welfare.

Another factor likely to undermine climate rule rollbacks is the way the administration has calculated the social cost of carbon, a metric that puts a dollar value on the harm caused by emitting a metric ton of carbon dioxide.

The report authors suggest the Trump team’s calculation could be vulnerable because deregulatory rulemakings don’t include "fully coherent explanations" of why the administration heavily favors a domestic calculation of social cost of carbon over the international value, used by the Obama administration.

Finally, rewrites of climate rules and other environmental regulations have altered the approach to "co-benefits."

The Trump administration has faced sharp criticism for arguing it should not justify regulating a pollutant based on the environmental and health benefits resulting from reductions in another pollutant.

The authors recommend federal agencies and OIRA "take a harder technical look at the co-benefit claims being made by federal agencies, especially the extent of scientific uncertainty about those claims."

The authors offered some proposals for how the Trump administration might more effectively secure its deregulatory objectives.

They pointed out that, along with pushing deregulation through the 13771 executive order, the administration was also drafting nearly 50 percent fewer "significant" regulations than both the Obama and Bush administrations.

They warned that this slow pace could undermine the administration’s objective to review the relevance of existing regulations.

Without many new rules coming in, there isn’t the same incentive for agencies to go back and look at existing mandates that are no longer necessary.

The administration would be more effective if it worked to increase the number of appointed officials at regulatory agencies, they said.

Graham noted that the administration needed to foster a close working relationship between appointees and career staff; without that, "it’s very unlikely you are going to get a defensible deregulation package."

They also urged the Trump administration to take into account how state and local governments are responding to the rule repeals.

While the administration has argued that it is easing economic burdens on American businesses and industry, Graham noted that outright repeal of rules could create uncertainty for industry as some states draft their own rules, particularly on regulating chemicals and climate change.

"If you are selling products across state lines, having five or 10 different state regulations could be worse than having one regulation for the whole country. In some cases, if they have a modest regulation, it can encourage some states not to regulate at all," Graham said.

He noted the administration is treating regulatory rollbacks as if they are solely a consideration for the federal government.

"They need to be working in collaboration with states and local governments; that will lead to uniform national solutions," Graham said.