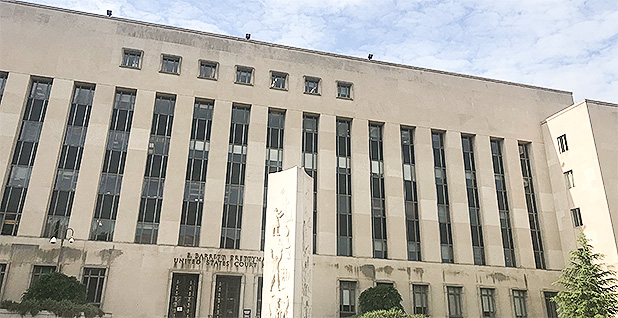 A view of the E. Barrett Prettyman Federal Courthouse, which houses the U.S. Court of Appeals for the District of Columbia Circuit. Ellen M. Gilmer/E&E News

In a case related to a failed landmark lawsuit targeting the Federal Energy Regulatory Commission’s new policy on tallying and analyzing downstream greenhouse gas emissions, the U.S. Court of Appeals for the District of Columbia Circuit ruled yesterday that it lacked jurisdiction to determine whether the agency violated the National Environmental Policy Act when it approved a series of infrastructure upgrades.

"Despite our misgivings regarding the Commission’s decidedly less-than-dogged efforts to obtain the information it says it would need to determine that downstream greenhouse-gas emissions qualify as a reasonably foreseeable indirect effect of the Project, Concerned Citizens failed to raise this record-development issue in the proceedings before the Commission," a three-judge panel for the D.C. Circuit wrote in an opinion yesterday.

Carolyn Elefant, who represented landowners in the Broad Run challenge, said she was shocked by the court’s ruling and plans to continue the fight.

"I’ve never had a ruling like this where an agency acted in violation of court precedent and the court gave them another opportunity," she said.

The D.C. Circuit found in 2017 that NEPA required FERC to consider the climate impacts from downstream uses of fuel that passed through the Sabal Trail pipeline and related projects in the Southeast (Energywire, Aug. 23, 2017).

Yesterday’s ruling flies in the face of the Sabal Trail finding, Elefant said.

"The court is going to give FERC another bite at the apple, and it’s going to be another year until these issues are resolved," she said.

Elefant and her clients are considering asking the court to reconsider the Broad Run case.

During oral arguments in the Otsego and Broad Run cases, Chief Judge Merrick Garland and Judges David Tatel and Robert Wilkins appeared skeptical of FERC’s arguments that climate impacts from natural gas produced or consumed as a result of its projects are "generic" and "inherently speculative" (Energywire, April 12).

Democratic Commissioner Cheryl LaFleur used her dissent in the Broad Run order to conduct a back-of-the-envelope assessment of upstream and downstream greenhouse gas emissions from the project.

Commissioner Richard Glick, another Democrat, also dissented from the Broad Run and Otsego orders. He recently co-wrote a legal article rebuking FERC for falling short on its climate analyses.

But the D.C. Circuit judges, all nominated by Democratic presidents, ultimately faulted landowner challengers for failing to push FERC to flesh out its record during proceedings before the commission.

"Maybe the court views this as something more political and didn’t want to issue an opinion that could be perceived as politically motivated," Elefant said.

The panel also rejected the challengers’ arguments that FERC had not adequately analyzed alternatives to a Tennessee compressor station within the Broad Run project.

"Under the circumstances of this case, the Commission’s selection of the proposed site was reasonable," the judges wrote. "NEPA requires nothing more."

Kinder Morgan said it was pleased with the court’s decision to allow the gas infrastructure expansion project to move forward.

FERC does not comment on court rulings. Glick, however, issued a statement about the ruling, saying it "unambiguously affirms" the agency’s obligation to do robust climate analysis.

"Although the Court denies the petition on procedural grounds, the opinion puts to bed any suggestion that NEPA & the NGA do not permit FERC to seriously consider the GHG emissions caused by a pipeline," the commissioner wrote.

This won’t be the D.C. Circuit’s last word on FERC climate reviews.

The court has at least three more climate-related pipeline challenges in the hopper (Energywire, March 5).

"While the Commission succeeded in defending a more limited GHG review in this case, we view this precedential decision as giving an admonition to the FERC — and arguably guidance to pipeline opponents — that the court would be willing to grant an appeal if the underlying circumstances were different," Christi Tezak, managing director for ClearView Energy Partners LLC, wrote in a note yesterday.

"On at least three separate occasions the court indicated that FERC’s unwillingness to ask the project sponsor to provide more information did not appear fully consistent with a well-executed NEPA review," Tezak wrote.

It’s unclear how the court will approach the issue in future decisions.

A D.C. Circuit ruling on FERC’s certificate for the Atlantic Sunrise pipeline in Pennsylvania is imminent.

The court has yet to schedule arguments on FERC’s authorizations of the Atlantic Coast and PennEast pipelines.