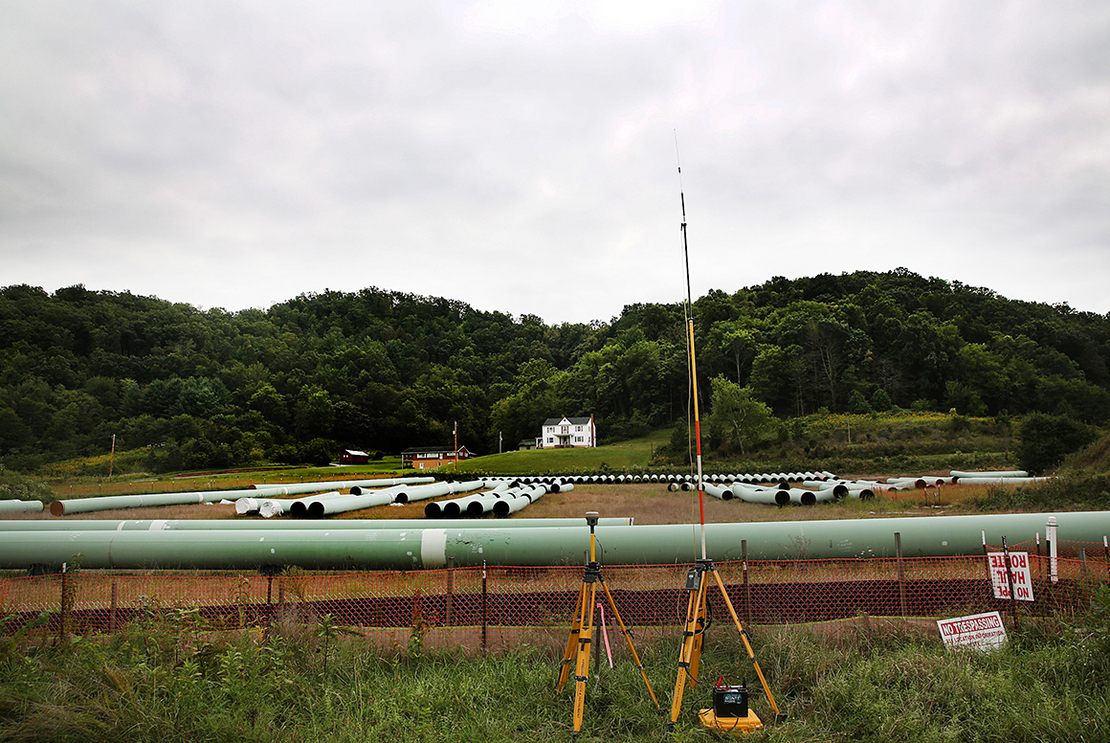 Sections of pipe in Virginia near protests last year over the Mountain Valley pipeline. Heather Rousseau/Roanoke Times via AP

A federal appeals court last week urged three federal agencies to show their work on the impacts of the Mountain Valley pipeline.

During oral arguments Friday, judges for the 4th U.S. Circuit Court of Appeals questioned whether the federal government had done enough to back up its assessments of potential environmental risks from building the 304-mile natural gas project.

In back-to-back hearings, the court reviewed a reissued Forest Service and Bureau of Land Management approval for the Mountain Valley pipeline to cross the Jefferson National Forest, as well as the Fish and Wildlife Service assessment of the project’s impact on two fish species: the Roanoke logperch and the candy darter.

In both cases, the 4th Circuit judges zeroed in on whether the agencies had fully analyzed the concerns raised by the pipeline’s environmental opponents.

The challenges are part of roughly half a dozen federal lawsuits facing the mostly built pipeline, which would carry natural gas from West Virginia to Virginia.

The lawsuits over the agencies’ approvals for the project come as other natural gas pipelines have faced major hurdles. Projects such as the Atlantic Coast and PennEast pipelines have been canceled in the last two years after failing to obtain permits.

Donald Verrilli — an attorney for Mountain Valley and a partner at the firm Munger, Tolles & Olson LLP — defended the project, noting that national forests are not supposed to be "kept for pristine use."

"I think that’s critical because it tells us there are going to be actions in the forest that are going to change the ecosystem," he said.

Wild Virginia and other environmental groups argued that BLM and the Forest Service had repeated prior failures to address the risk of sedimentation and erosion when the agencies granted new approvals in January for the pipeline to cross 3.5 miles of the Jefferson National Forest.

The 4th Circuit had tossed out prior approvals in 2018, after finding the permits violated federal laws such as the National Environmental Policy Act and Mineral Leasing Act.

For the reissued approval, the agencies had continued to rely on modeling that did not match on-the-ground conditions, leading them to underestimate the amount of sedimentation from construction, said Sierra Club senior attorney Nathan Matthews.

He noted that the Jefferson National Forest has steep slopes where sediment and erosion pose challenges to construction.

"A new hydrological analysis predicts a 10, 20, 30 percent increase in sediment," Matthews said. "The agency has an obligation to cover this, but they didn’t."

Judge Stephanie Thacker, an Obama appointee, questioned how the agency’s analysis could be effective without considering "real-world data points."

An attorney for the federal government said the model used enough data from other areas to be "statistically robust for use."

The agencies had taken seriously the problems the 4th Circuit found with the initial approval and had prepared a detailed supplemental environmental impact statement, said Brian Toth, a Justice Department attorney representing the Forest Service and BLM.

"Any model will have limitations," he said. "The important thing under NEPA is the agency acknowledges the limitation. It didn’t rely on the model alone."

For example, Toth noted that while construction of Mountain Valley had been "put to bed for a little bit," the government is receiving weekly updates on the stability of the hillside.

In a subsequent hearing, which focused on FWS’s biological opinion and incidental take statement for the Mountain Valley project, environmental challengers argued that the agency had failed to adequately consider the potential harms of increased sediment, climate change and other factors to the Roanoke logperch and candy darter.

Both species are highly sensitive to increases in sediment, and the candy darter is already predicted to be functionally extinct within the next 25 years, said Sierra Club senior attorney Elizabeth Benson.

The FWS analysis of the baseline level risk to the fish did not consider the potential additive harms from other stresses in the environment — such as logging and agricultural runoff — even without pipeline construction, she said.

"The Fish and Wildlife Service can’t look at the project impacts in a vacuum," Benson said.

Wynn, an Obama appointee, asked why the agency had relied on a 17-year dataset that did not explicitly mention climate change to analyze potential harm to the species.

McArdle responded that mentioning climate change, droughts or floods explicitly wasn’t as important as what the data showed about the periods of highest and lowest water flow.

"It indicated that logperch were not very affected by floods and droughts," he said.

Discussing the impacts of climate change was not "terribly important" in the context of this project, added Mountain Valley attorney George Sibley III, a partner at the firm Hunton Andrews Kurth LLP.

The environmental impacts of constructing the project would extend over a few years, while climate impacts are more long term, Sibley said.

"Yes it mentions ongoing stressors," she said. "There is no specificity, no analysis."