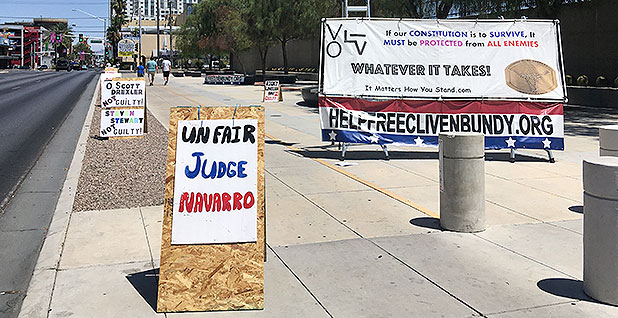 Supporters of Cliven Bundy and others involved in the 2014 standoff in Bunkerville, Nev., placed these signs outside the federal courthouse in Las Vegas. Jennifer Yachnin/E&E News

LAS VEGAS, Nev. — Despite getting a text message demanding that she "pass [a] death sentence" against four men who participated in the 2014 armed standoff between ranchers and federal agents near Bunkerville, Nev., a juror does not need to be dismissed from the case, U.S. District Judge Gloria Navarro determined yesterday.

Following brief testimony from the woman identified as "Juror No. 1," both federal prosecutors and defense attorneys urged Navarro to retain the juror, praising the woman’s decision to immediately report the text to the court.

"The fact that she came to you shows she takes her duties as a juror very seriously," said acting U.S. Attorney for Nevada Steven Myhre.

According to Navarro, Juror No. 1 received a text message from a friend stating: "You have 2 hours more to pass death sentence on these prisoners."

In a brief conversation with Navarro and the attorneys, and without the other jurors present, Juror No. 1 said she had received the text Monday and then reported it to the court within about five minutes.

"I received a text and came in and talked to you," she told Navarro. She told the judge that she had not shown the text to her fellow jurors or discussed it with them.

Juror No. 1 also said she has subsequently blocked the sender of the text, who was not identified.

"I appreciate you letting us know right away," Navarro said.

The incident occurred on an otherwise routine day of testimony in the case, in which federal prosecutors are making their second attempt to jail four men who took part in the 2014 standoff. The confrontation was sparked when agents from the Bureau of Land Management tried to seize rancher Cliven Bundy’s cattle over more than $1 million in unpaid grazing fees.

Federal prosecutors allege the quartet conspired with Bundy and others to interfere with federal officers trying to carry out court orders to round up cattle.

In the current trial, which began July 10, federal prosecutors are also trying to tie Drexler, Parker and Stewart to other protests on public lands — such as the Sugar Pine mine in Josephine County, Ore., in April 2015 and the White Hope mine near Lincoln, Mont., in August 2015 — and highlight their participation in the Idaho III%, an anti-government militia group.

Attorneys for both sides spent much of yesterday’s trial sparring over Facebook postings made by Parker, including comments he made on links to a social media page for the Northern Nevada Light Foot Patriots.

"Got a neighbor in some trouble down in Nevada … What are you going to do when the shooting starts?" Parker wrote in one comment flagged by the prosecution.

Another Facebook status asked: "Does anyone know anybody in the Nevada militia?"

But Parker’s defense attorney Jess Marchese repeatedly objected to federal prosecutors’ attempts to include additional status updates written more than a year after the showdown in Nevada, arguing that such statements on the incident cannot be used to show Parker’s state of mind in 2014.

"You can’t go back in time to show what someone’s intent was," Marchese said, responding to prosecutors’ attempts to introduce a statement in which Parker said of the 2014 showdown: "The right time presented itself and we decided to stand."

Other documents introduced by federal prosecutors included a meme Parker posted to his Facebook account, featuring an image of a wolf baring its teeth with the words: "Never tread on someone who wants to die in battle."

"Low there do I see my family all the way back to the beginning. They call me to take my place amongst them," Parker commented on the meme.

Yesterday’s hearing was lightly attended by about a half-dozen spectators, including Parker’s wife, Andrea Parker, as well as California resident Neil Wampler, who was acquitted last year for his role in the occupation of the Malheur National Wildlife Refuge (Greenwire, Oct. 28, 2016).

Andrea Parker, who publishes daily video updates on the trial along with Montana resident John Lamb, a supporter of the Bundy family, has criticized the Justice Department for what she calls efforts to damage her husband’s defense.

"They had a mistrial the last time. They have doubled down. They have tripled down," Parker said in a video posted Monday. "They have thrown everything they’ve got at this. They have stacked the jury against us, they have prevented us from talking about the BLM’s heavy-handedness, state of mind. They have taken any form of defense away from us."