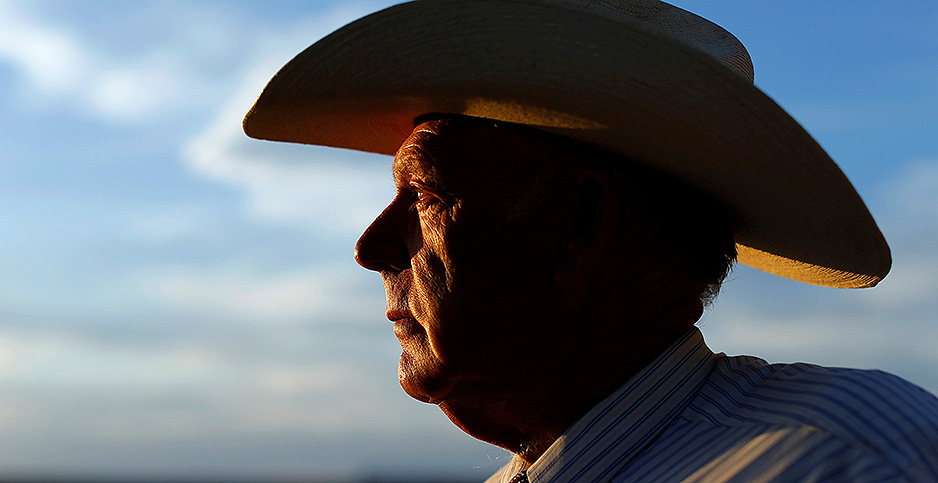 Federal prosecutors today will urge the 9th U.S. Circuit Court of Appeals to grant them another chance to prosecute Nevada rancher Cliven Bundy and two of his sons for their roles in a 2014 armed showdown near the family's Bunkerville, Nev., ranch. Mike Blake/Reuters/Newscom

Federal prosecutors today will urge the 9th U.S. Circuit Court of Appeals to grant them a second chance to prosecute Nevada rancher Cliven Bundy and two of his sons for their roles in a 2014 armed showdown near the family’s Bunkerville, Nev., ranch.

The Justice Department is seeking to reverse a decision by U.S. District Court for the District of Nevada Chief Judge Gloria Navarro in 2018 to dismiss the case with prejudice — negating a 16-count criminal indictment and barring federal prosecutors from staging a retrial — after she found the government withheld key information from defendants.

According to court documents, federal prosecutors will argue that Navarro, an Obama appointee, overstepped when she threw out the case, asserting that she should have dismissed a portion of the indictment or, alternatively, dismissed the case without prejudice to allow prosecutors to obtain a new indictment (Greenwire, Feb. 7, 2019)

Attorney Larry Klayman, who represents Cliven Bundy, disparaged the government’s request for a new indictment as a "Hail Mary," and accused the Bureau of Land Management of "hatefully targeting the Bundys."

Klayman also alleged that the Justice Department itself organized the roundup of Bundy’s cattle in order to pursue a prosecution of his client.

"They were behind the Standoff [sic] and the entrapment of the Bundys to begin with and obviously wanted to cover up the tracks of their egregious and illegal actions," Klayman wrote.

The armed standoff occurred when BLM attempted to round up Bundy’s cattle for auction in order to satisfy years of unpaid grazing fees and trespass fines.

Klayman unsuccessfully sought last month to force the court to change its synopsis of the appellate case, arguing that its description of an appeal "arising from an armed confrontation with BLM officers" is biased against Cliven Bundy, his co-defendants, his sons Ryan and Ammon, and Montana resident Ryan Payne.

"This case synopsis, whoever inappropriately crafted and posted it, shows on its face an underlying extra-judicial bias and prejudice against the Appellees, as it unnecessarily, misleadingly and egregiously portrays them in a negative light," Klayman wrote. "The case synopsis should simply state that this appeal arises from the dismissal of the supersedes indictment of Appellees."

The court rejected the request.

Bundy has long argued a fringe theory that the federal government cannot own public lands and that millions of acres belong instead to Nevada and local counties.

But he has repeatedly lost that battle in federal court challenges dating to 1998, as well as in Nevada state court last year in a case the ruling judge characterized as "simply delusional" (Greenwire, April 10, 2019).

The Center for Biological Diversity, which intervened in that case, is currently seeking $88,000 in attorneys’ fees from Bundy, asserting that the lawsuit was based on "frivolous and vexatious" claims.

A settlement conference in that case is set for late July.

Where the cattle graze

In the meantime, BLM has not indicated whether it plans to attempt another roundup of the Bundy cattle, which continue to illegally graze on public lands more than six years after the 2014 incident.

BLM officials were contemplating how to address the incident in 2017 (Greenwire, Nov. 20, 2017). But yesterday, the agency remained mute over its plans.

"At this time, the BLM has no comment to offer on this matter," BLM Nevada State Office spokesman Chris Rose wrote in an email.

The Justice Department itself might have attempted to seize Cliven Bundy’s cattle if he or his sons were convicted on one of several felony counts identified in a superseding indictment filed in March 2016.

Court documents show that the federal government sought a "forfeiture money judgement" or at least $3 million, "including any and all cattle on the Bunkerville Allotment and Lake Mead National Recreation Area (property)."

Had federal prosecutors succeeded in the trial, the Justice Department — rather than BLM — might have seized the cattle with the assistance of state or local contractors.

The agency received a complaint about Bundy’s action from a group of hikers who documented the project during a visit to the 300,000-acre monument in southeastern Nevada in mid-April.

Ryan Bundy told E&E News earlier this month that he had not been contacted by BLM officials and was unaware of any review (Greenwire, May 13).

At the time, he also rejected the notion that any irrigation project could have violated federal regulations or laws because it involves a "non-existent monument."

BLM spokesman John Asselin, who represents the Southern Nevada District Office, told E&E News yesterday, "The BLM is aware of the allegation and has no further comment at this time."

The U.S. Court of Appeals for the District of Columbia Circuit is also reviewing a request from Ryan Bundy to permit his lawsuit against high-ranking government officials to proceed.

A federal judge dismissed Bundy’s case in 2019, explaining that his allegations that officials had violated his constitutional rights were misdirected, unsupported or filed too late (Greenwire, June 11, 2019).

The appellate court announced in April that it will decide the matter without holding oral arguments. The court had previously suspended in-person events during the initial outbreak of the novel coronavirus (E&E News PM, March 18).