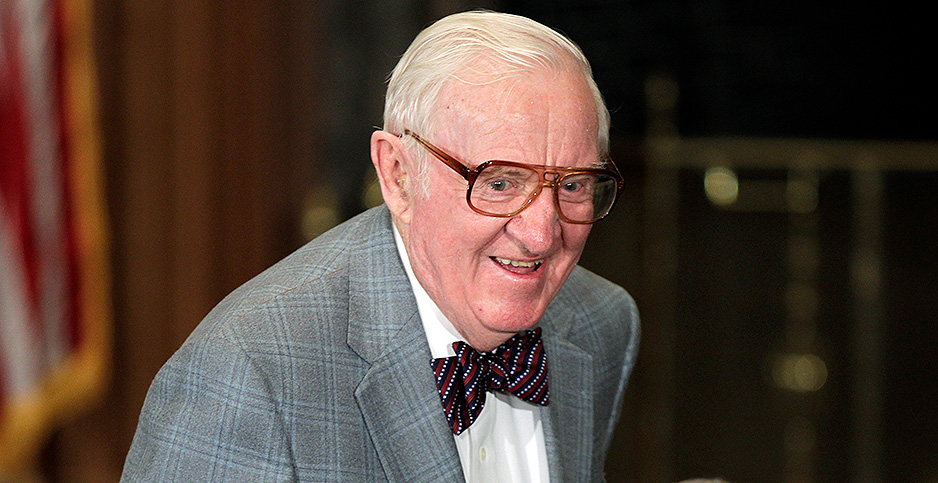 The late jurist, who was on the bench from 1975 to 2010, authored two of the most important opinions in environmental law: Massachusetts v. EPA and Chevron v. Natural Resources Defense Council.

The first affirmed EPA’s authority to regulate greenhouse gas emissions. The second established the oft-cited legal precedent directing judges to defer to an agency’s understanding of an ambiguous law.

Stevens died yesterday in Fort Lauderdale, Fla., after having a stroke the day before, according to the Supreme Court press office. He was 99.

While mourning the justice’s death, environmental law experts extolled the impacts of his opinion in Massachusetts v. EPA, the 2007 decision that teed up years of EPA climate policies.

The decision not only addressed the dispute about EPA’s authority over greenhouse gases but also affirmed Massachusetts’ right to bring the case and ordered the agency to better explain itself if it chose not to regulate emissions.

Carlson noted that the Supreme Court’s ruling in the case laid a foundation the federal government has been building on ever since. Obama-era regulations targeting emissions from power plants, oil and gas drilling, and automobiles all stem from that ruling.

Robert Percival, head of the environmental law program at the University of Maryland, credited Stevens with zeroing in on what it would take to bring then-Justice Anthony Kennedy into the majority: an emphasis on legal precedent establishing states’ rights to sue in the case.

But he didn’t side with environmentalists in every case, Percival said.

"He wasn’t an automatic vote one way or the other," he said. "He tended particularly in later years to side with the environmental side, but it wasn’t a matter of being based on ideology; it was based on his reading of the statute and his willingness to give deference to an agency if it’s adopted a reasonable regulation."

When Republican President Ford nominated Stevens to the Supreme Court in 1975, the Chicago native’s record on environmental issues was largely unknown.

The World War II veteran had worked for years as an antitrust lawyer and then as a judge on the 7th U.S. Circuit Court of Appeals. He wore a bow tie and was well liked in legal circles.

But he had big shoes to fill on conservation issues, taking the former seat of Justice William Douglas, an environmental firebrand and avid outdoorsman who retired in 1975.

The Senate confirmed Stevens unanimously, and the justice eventually became known as a liberal stalwart and a friend to the environment. Vermont Law School professor Pat Parenteau said Stevens ultimately eclipsed even Douglas as the most influential member of the court on environmental law.

That was clear in Stevens’ dissent in Rapanos v. United States in 2006, Adler said. In the split Clean Water Act case, the justice recounted the damage done to three wetlands sites.

"Prior to their destruction, the wetlands at all three sites had surface connections to tributaries of traditionally navigable waters," he wrote, then detailing the connections and the benefits of such wetlands.

Sean Donahue, who often represents green groups in Supreme Court litigation, said Stevens had a knack for environmental cases, thanks to his interest in science and affinity for digging into technical details of cases.

"He was sympathetic to the task of governing a modern massive diverse republic in a time of rapid change, of the need to apply the law so as to accommodate to new realities," Donahue said. "And he didn’t mind digging into complex statutes."

Percival was a clerk for then-Justice Byron White from 1979 to 1980 and recalled that Stevens was seen as a quirky junior justice on the court, as he insisted on having only two clerks instead of the typical four and wrote all his first opinion drafts himself.

Stevens’ respect for agency expertise won the day in Chevron, the landmark 1984 decision.

The ruling was seen as a bitter defeat for NRDC and other environmentalists at the time, but the resulting precedent is now celebrated in those circles.

The case dealt with a Reagan-era air permitting policy that environmentalists viewed as too industry-friendly. Led by Stevens, the Supreme Court ultimately sided with the government, finding that EPA was entitled to deference on its interpretation of the relevant part of the Clean Air Act.

The decision is often recognized as the most influential administrative law case ever — setting limits on judges’ ability to second-guess many agency decisions.

Stevens’ respect for agency expertise, paired with his concern for the purpose of statutes, resulted in numerous rulings favoring strong environmental protections, said University of California, Berkeley, professor Dan Farber, who clerked for Stevens early in his career.

"He always believed that the purpose of the law was important, not just using a dictionary to find out what individual terms mean, and the purposes of the environmental statutes were very strongly protective of the environment, and so I think he gave that a lot of weight in his decisions," Farber said.

Lois Schiffer, who was the top environmental lawyer at the Justice Department during that time, stressed the importance of the case.

"It was a very significant Supreme Court decision because using his thoughtfulness and integrity in his reading of statutes, he really made a decision that was essential to the protections that are afforded by the Endangered Species Act and decided it in a way that really carried out Congress’ intent to be protective of species, including their habitat," she said.

Between Sweet Home and Massachusetts, "Justice Stevens is responsible for two of the more aggressive embraces of federal regulatory authority over environmental concerns," Adler said.

Other notable Stevens opinions include Tahoe-Sierra Preservation Council v. Tahoe Regional Planning Agency, another important case that found a government agency did not have to compensate landowners for an alleged regulatory taking after temporarily freezing residential development in the Lake Tahoe area.

And in a loss for environmentalists in 1989, Stevens authored the unanimous decision in Robertson v. Methow Valley Citizens, which found the National Environmental Policy Act does not impose a substantive duty on agencies to mitigate project impacts.