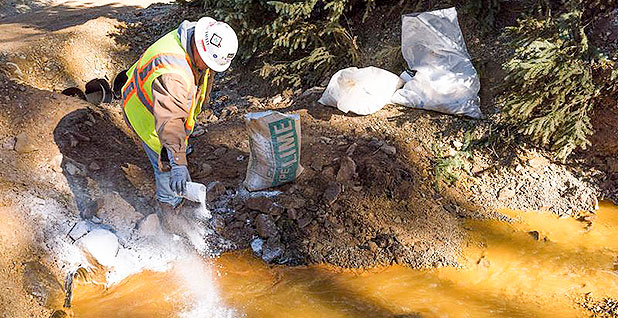 The Supreme Court today declined to add two environmental cases to its docket for the fall term.

The court also declined to review a case over EPA authority to apply emissions standards during industrial equipment malfunctions.

The decisions came as the high court issued its final opinions for the current term and agreed to hear oral arguments in the fall over President Trump’s immigration and travel executive order.

In the mine case, New Mexico says actions by Colorado helped lead to the August 2015 rupture at the Gold King mine, which sent 3 million gallons of water laced with toxins down the Animas and San Juan rivers.

U.S. EPA contractors helped cause the spill while working to prevent such an outcome. The Gold King site is near Silverton, Colo., but the spill affected New Mexico, Utah and tribes downstream.

New Mexico said Colorado regulators were responsible for employing a "risky strategy" by approving the plugging of abandoned mine shafts like Gold King’s with bulkheads to contain wastewater.

In June 2016, New Mexico leaders moved to bring a complaint against Colorado in the Supreme Court, which hears interstate disputes.

"Besides Colorado’s direct role in the Gold King Mine release, Colorado is directly responsible for the hazardous conditions that preceded the catastrophe," New Mexico alleged.

But both Colorado and the federal government had urged the Supreme Court to pass on the case, arguing that New Mexico’s case was barred or pre-empted by federal law.

They also argued the case would overlap too much with litigation that New Mexico brought in federal district court against EPA and the mine’s operators. That lawsuit is still pending.

If New Mexico got its way in the Supreme Court, the Justice Department also argued it would "interfere with EPA’s ongoing response actions." EPA added the Gold King site to the Superfund National Priorities List in September 2016.

It takes the votes of four justices to take up a case. According to today’s announcement from the court, Justices Clarence Thomas and Samuel Alito, both from the conservative wing, sided with New Mexico.

The order rejecting the case said Thomas and Alito were partial to the litigation because of arguments by Thomas in a dissent last year to the court’s decision not to hear marijuana-related litigation that Nebraska and Oklahoma brought against Colorado.

"The complaint, on its face, presents a ‘controvers[y] between two or more states’ that this court alone has authority to adjudicate," Thomas wrote then. "The plaintiff states have alleged significant harms to their sovereign interests caused by another state.

"Whatever the merit of the plaintiff states’ claims," he wrote, "we should let this complaint proceed further rather than denying leave without so much as a word of explanation."

"The Supreme Court’s ruling only limited the venue in which the State of Colorado can be sued for the harm done to New Mexico children, families and businesses," Hallinan said in an email. "Attorney General Balderas will continue to fight for economic, social and environmental justice until New Mexico is compensated appropriately by all parties responsible for the horrific impacts of the Gold King Mine Spill."

An industry petitioner, the American Municipal Power Inc., had asked the court to take up the issue in the context of EPA’s boiler standards.

In 2011, EPA rejected industry’s call to set work-practice rules instead of numeric emissions limits during malfunctions, deciding that limits would apply at all times to industrial boilers, process heaters and smaller boilers.

According to American Municipal Power, a nonprofit corporation that provides services to communities operating municipal electric systems, EPA’s standard would be impossible to achieve because malfunctions are "an inevitable fact of industrial life."

AMP also said in its March petition to the Supreme Court that the D.C. Circuit first erred in 2008 when it comes to EPA’s authority to regulate emissions during malfunctions (E&E News PM, March 24).

The Trump administration’s Justice Department had asked the Supreme Court to pass on taking up the boiler standards issue, arguing that EPA’s rule was consistent with the 2008 D.C. Circuit decision.

Nothing in the Clean Air Act requires the agency to take equipment malfunctions into account, DOJ told justices. The administration noted that it would have been nearly impossible to set numeric standards accounting for malfunctions in the boiler standards because of the "myriad different types" of equipment breakdowns.

The limits in the Obama-era rule reflect, the administration said, "a reasonable estimate of the emissions achieved in practice by the best-performing sources" (Greenwire, May 25).

Environmentalists today cheered the court’s decision to decline review in the case and said it would have opened up a "loophole" for polluters.

"The government must not hand polluters a get-out-of-jail-free card, and polluters must not force people to live in fear for their health and the health of their families," said James Pew, an attorney at Earthjustice.

"A Clean Air Act loophole for malfunctions gives a perverse incentive for polluting companies to forego necessary investments in maintenance, upkeep and upgrades to their equipment," he said.