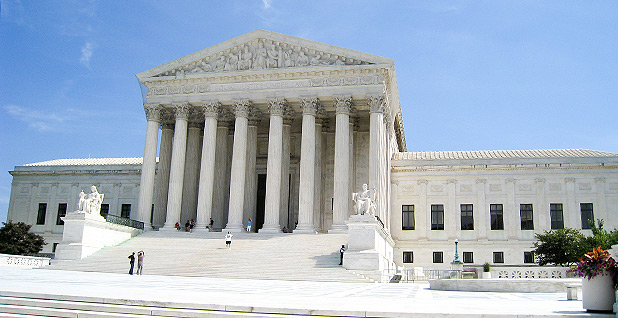 The Supreme Court today turned down a sweeping challenge to pipeline oversight and took no action on a closely watched Clean Water Act debate.

Property owners in the path of the Mountain Valley pipeline through both Virginia and West Virginia have argued the Federal Energy Regulatory Commission’s handling of land takings for natural gas transport projects is unconstitutional. The justices declined to consider their challenge.

Petitioners first challenged FERC’s process in federal district court, where the case was dismissed for a lack of jurisdiction. The 4th U.S. Circuit Court of Appeals upheld the ruling last year.

The landowners then approached the Supreme Court. Government lawyers urged the justices to reject the petition and preserve the 4th Circuit’s decision. The proper procedure, as established by the Natural Gas Act, is to present claims first to FERC and then to an appellate court, they argued.

That process, landowners say, could result in a pipeline project overtaking their land before their complaints receive a proper airing. FERC can use "tolling orders" to delay action on challenges that come before the agency.

"The result? An administrative agency (i.e., FERC) sitting in judgment over the constitutionality of Congressional action," the petitioners wrote. "Why? Because Congress said so.

"This, in fact, is the precise definition of legislative supremacy at its best, tyranny at its worst," they wrote.

The case is one of three pipeline-related petitions up for consideration by the Supreme Court (Energywire, Jan. 16).

The justices will likely decide next month whether to take up a religious freedom challenge stemming from the Atlantic Sunrise pipeline project in Pennsylvania.

A third petition, which concerns states’ role in the permitting process for Atlantic Sunrise and other such projects, has not yet been scheduled for a vote.

Court watchers will have to wait a little longer to see whether the Supreme Court will wade into a Clean Water Act debate that, if taken, will be the biggest environmental case of the term.

Both raise a critical question about the scope of the Clean Water Act: Does the statute apply to pollutants that travel through groundwater before reaching a federally regulated water?

But other circuits have rejected that analysis, concluding that pollution must move directly from a source into a federally regulated waterway to be covered.

If the Supreme Court ultimately declines to get involved, the lower courts may continue to develop competing precedent. If the justices take one or both of the cases, their decision could clarify the scope of the Clean Water Act and affect permitting requirements across the country (Greenwire, Dec. 4, 2018).

Also on the Supreme Court’s list of orders this morning: a denial of a petition involving oil and gas rights in Michigan.

The justices will not take up Zaremba v. Encana Oil & Gas (USA) Inc., a case stemming from landowner allegations of bid-rigging by Encana and Chesapeake Energy Corp. to suppress the price of mineral rights in 2010.

The 6th U.S. Circuit Court of Appeals ultimately sided with Encana, and the Supreme Court today declined to review that decision.