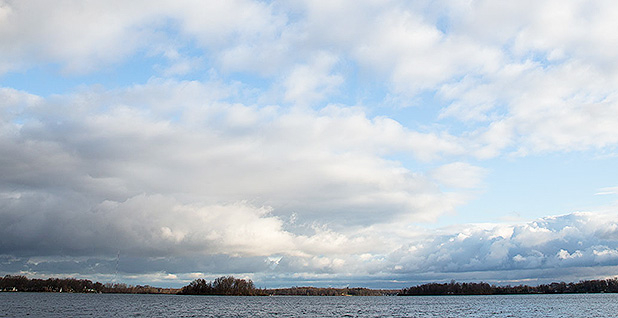 The Supreme Court today agreed to consider a case between a landowner and the Interior Department over a Michigan tract being held in trust for a Native American tribe. Photo courtesy of Gun Lake Casino.

The Supreme Court today agreed to take another look at a long-running dispute between a landowner and the Interior Department over a 147-acre tract in Michigan that the government is holding in trust for a native tribe.

David Patchak, who lives 3 miles from the disputed property in Wayland Township, Mich., brought the petition to the Supreme Court. He has long argued that he would be harmed by the Match-E-Be-Nash-She-Wish Band of Pottawatomi Indians’ plans to build a casino on the site.

This is the second time the case has made its way up to the high court. In 2012, the Supreme Court ruled that Patchak could proceed with his claims and sent the case back to the district court. Since then, however, Congress passed a law requiring courts to dismiss pending litigation over the plot of land.

While granting the Patchak case, justices today declined to review the Obama administration’s critical habitat for the polar bear and to take up a case involving Clean Water Act permit violations. It takes the votes of four justices for the Supreme Court to hear a case.

The land-in-trust case has a complex history. The Interior Department recognized the Match-E-Be-Nash-She-Wish Band of Pottawatomi Indians — also known as the Gun Lake Tribe — in 1998. On April 18, 2005, the Interior Department invoked authority under the Indian Reorganization Act to take the 147-acre plot of land in trust for the tribe.

Patchak sued in 2008 in the U.S. District Court for the District of Columbia, asserting that the acquisition of the property wasn’t authorized under the Indian Reorganization Act because the tribe was not recognized when the law was enacted in 1934.

While the case was pending, the Supreme Court ruled in a separate case that the Indian Reorganization Act does, in fact, limit Interior’s authority to taking land into trust for tribes that were under federal jurisdiction in 1934.

The D.C. district court, however, never applied that ruling to Patchak’s claims, instead finding that he lacked legal standing to sue.

Patchak appealed that ruling, and the Supreme Court in 2012 found that his claim could proceed over the federal government’s objections that permitting such suits would create significant barriers to tribes’ ability to promote investment and economic development on their lands taken into trust.

Michigan lawmakers stepped in, and in 2014 Congress passed the Gun Lake Trust Land Reaffirmation Act, which said any pending or future cases related to the property at issue "shall be promptly dismissed." The courts followed the direction and dismissed Patchak’s claims.

Patchak took his case to the Supreme Court again in November, arguing in a petition that the 2014 law stripped him of the right to sue even though the high court previously said his case could proceed.

"It is difficult to imagine a more direct invasion of the judicial power than occurred here," he said.

The law "sets a dangerous precedent" by allowing Congress "to encroach upon and exercise powers reserved for the judiciary," Patchak said.

If the law were upheld, he warned, there would be no limit on Congress’ ability to effectively review and eliminate legal decisions "it finds inconvenient or with which it disagrees."

At first, the federal government declined to respond to the suit in the Supreme Court, but justices requested a response from the Justice Department in a signal of their interest in the case.

In a March brief, the Trump administration urged the court to decline the petition.

Congress, DOJ argued, has broad power to define and limit the jurisdiction of federal courts. There’s "nothing inherently suspect" in what Congress did in this case, DOJ attorneys said.

The Gun Lake Act "is a statute of limited reach and does not present a question of nationwide importance," the government unsuccessfully argued.

Justices today declined requests by Alaska and oil and gas interests to review the Obama administration’s critical habitat designation for the polar bear.

In 2010, the Fish and Wildlife Service designated a 187,000-square-mile area as critical habitat for the endangered species. That habitat was made up of three units — sea ice, dens on land and barrier island territory — with sea ice making up nearly 96 percent of the total area.

The 9th U.S. Circuit Court of Appeals in February 2016 unanimously upheld the designation, reversing a lower-court ruling that threw out the rule (E&E News PM, Feb. 29, 2016).

The state of Alaska, the Alaska Oil and Gas Association, and the American Petroleum Institute each petitioned the Supreme Court to review the 9th Circuit ruling. They argued that the designation was unjustifiably large and would pose burdensome costs.

In March, Trump’s Justice Department had asked the Supreme Court to take a pass on the case. The administration argued that the basis for the Supreme Court petition was faulty and that the case might become irrelevant given legal battles over a suite of controversial changes the Obama administration made in February 2016 to critical habitat rules (Greenwire, March 29).

Justices today also declined to review a landowner’s citizen enforcement claims under the Clean Water Act. The landowner, Louis Paolino, alleged that stormwater runoff from a neighboring lot was contaminating his property in Rhode Island and that the neighboring lot lacked a valid water discharge permit.

Among the legal questions the Supreme Court petition posed was whether a facility violated the Clean Water Act by operating under a discharge permit that was issued to the landowners but not to the operator of the facility itself.