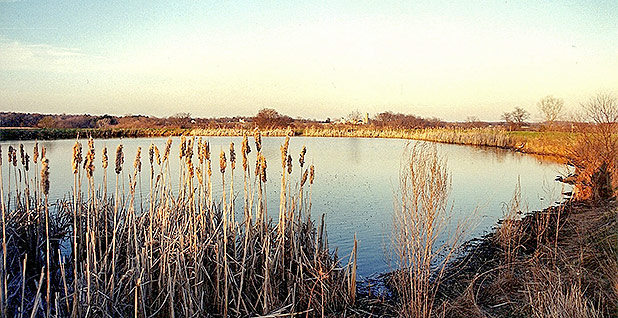 The Supreme Court will decide which lower courts should hear challenges to the Obama administration's Clean Water Rule, which attempted to clarify the scope of the Clean Water Act. Photo by Montgomery County Planning Commission, courtesy of Flickr.

The Supreme Court’s decision this morning to continue hearing litigation over the Clean Water Rule could mean justices see the case as relevant no matter what President Trump decides to do with the regulation.

The high court this morning denied the Trump administration’s motion to pause the litigation in light of Trump’s recent executive order compelling U.S. EPA and the Army Corps of Engineers to review and revise or rescind the rule (Greenwire, April 3).

The case centers on the question of which court has jurisdiction to hear challenges to the Obama administration’s Clean Water Rule — also known as Waters of the United States, or WOTUS — which clarified which wetlands and streams receive automatic protection under the Clean Water Act.

Justices may have seen the case as presenting a "potentially recurring jurisdictional issue" under the Clean Water Act "that is worth resolution," said Jonathan Adler, a law professor at Case Western University.

"Given that I suspect the court took the case in the first place because of its interest in this issue," Adler said, "it should not be surprising that the court is not going to let go of the case right now."

The National Association of Manufacturers brought the case, arguing that the 6th U.S. Circuit Court of Appeals erred in February 2016 when it decided in a 2-1 decision to hear challenges.

The choice of court affects the resources needed to litigate the merits of challenges, sets the statute of limitations for filing lawsuits and helps determine whether actions can be challenged in subsequent civil or criminal proceedings.

Environmentalists had asked the Supreme Court to continue hearing the litigation and cheered today’s decision.

"The Court saw through the Trump administration’s maneuver," said Jon Devine, a senior attorney in the Natural Resources Defense Council’s water program. "The administration brazenly attempted to postpone the Clean Water Rule’s implementation indefinitely, while it goes about gutting protections for water bodies that serve as drinking water supplies, natural flood buffers and pollution filters, and destinations for countless Americans who swim and fish."

As is typical with such motions, justices did not give any details of why they decided to go ahead with the case.

Larry Liebesman, a senior adviser with the Washington water resources firm Dawson & Associates, said justices might have been persuaded by the opposition to the Trump administration’s motion to hold the case’s briefing schedule in abeyance.

Along with environmentalists, several state supporters of the rule and industry entities asked the court to continue with the case and resolve the jurisdiction issue.

"Given the confusion about what court is supposed to hear the case and implications for future challenges to other regulations on the Clean Water Act," Liebesman said, "they may very well have concluded that it makes sense right well to address the ambiguity right now."

"What they were basically saying to the court was, we’re going to engage in a rulemaking and we’re going to make this whole thing go away," Parenteau said, "and in the meantime, we want the stay to remain in place — but there will never be an adjudication of whether the rule has in fact been valid."

According to the current case schedule, the first merits brief from the National Association of Manufacturers is due April 13.

The Supreme Court is expected to hear oral arguments in its fall term and could issue a decision by the end of the year.

As the litigation continues to play out in the Supreme Court, the Trump administration is continuing to review the Clean Water Rule. The president’s executive order instructed the agencies to consider using a test outlined by the late Justice Antonin Scalia in the infamously muddled 2006 Rapanos Supreme Court decision.

Scalia argued that the Clean Water Act applied only to "navigable waters" connected by a surface flow at least part of the year.

The Obama administration, on the other hand, based its Clean Water Rule on Justice Anthony Kennedy’s test that waters must have a "significant nexus" to navigable rivers and seas (Greenwire, March 7).

"Given that we don’t know how quickly the Trump administration will act on WOTUS," Adler said, "it’s possible courts will begin to rule on the merits of the current rule before a replacement is developed."

EPA Administrator Scott Pruitt has signaled that the agencies will fast-track their review of the Obama rule.

Parenteau said it will be "interesting" to see how the timelines for the Supreme Court litigation and reconsideration of the rule interact.

"It’ll be interesting to see whether or not they can actually complete the rulemaking when the case is heard in the fall and walk into court and say, ‘Here’s a new rule,’" Parenteau said.

Jan Goldman-Carter, senior manager of wetlands and water resources at the National Wildlife Federation, said the Supreme Court’s decision today to continue with the case should signal to the Trump administration that it can’t "end-run either the formal rulemaking process or the courts."

Environmentalists would like to see the 6th Circuit continue to hear challenges over the Obama administration rule, Goldman-Carter said.

If the Supreme Court finds that district courts have jurisdiction, she argued, it would magnify the uncertainty and inconsistency about the application of the Clean Water Act.

"The cases challenging the rule are based on the same basic arguments and the same basic perceived flaws in the rule as they apply across the country," she said. "As a practical matter, it does not seem worth utilizing judicial resources to re-litigate that case at the district court level and then at the appellate court level."

Under the Obama administration, the federal government maintained that challenges belong in federal appellate courts. As Oklahoma attorney general, Pruitt argued that district courts should hear the cases.

Parenteau predicted that the Trump Justice Department would continue the Obama administration’s argument that the challenges belong in federal appeals courts.

"I think DOJ is probably going to have the final word on that," he said, "and much prefer to defend these rules one time and not defend it all over the country."