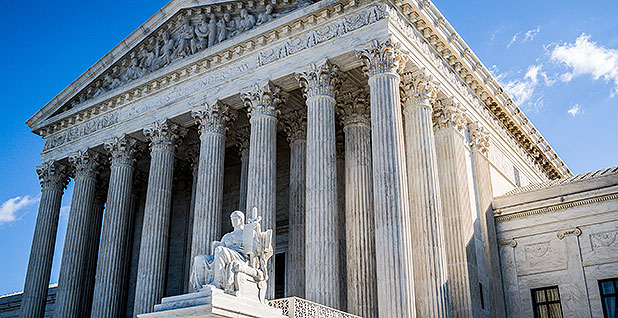 The Supreme Court today asked for the Trump administration’s views on Virginia’s moratorium on uranium mining, a sign that justices are interested in a mining company’s plea to overturn the ban.

But the high court otherwise declined to add several other environmental and energy petitions, including two fisheries cases, to its docket. They were among a long list of denials issued as justices began their October 2017 term.

But the environmental law docket is so far relatively light. Headlining it is a fight over the correct legal venue for challenging the Obama administration’s Clean Water Rule. Justices are scheduled to hear oral arguments next week in the case.

In the mining case, Virginia Uranium Inc. is appealing a recent decision by the 4th U.S. Circuit Court of Appeals upholding the state’s long-standing moratorium on uranium extraction. Justices asked the solicitor general to file briefs responding to the company’s petition.

The central legal question in the case is whether the federal Atomic Energy Act pre-empts Virginia’s law. Virginia Uranium argues the state has taken on the regulation of radiological safety hazards resulting from activities — the milling of uranium and management of tailings — that are under the purview of the Nuclear Regulatory Commission.

"The commonwealth’s prohibition of uranium development transgressed the limits imposed by the AEA," the company said in court documents.

The 4th Circuit in February issued a split decision, finding that state leaders cited as defendants were immune from litigation and that Virginia was the "paramount proprietor" of minerals within its jurisdiction (Greenwire, Feb. 21).

This is the second time this year that justices have asked the Trump administration to weigh in on a state mining ban. In May, they asked for the solicitor general’s views in a case brought by a part-time prospector, Brandon Rinehart, seeking to knock down California’s ban of a method of mining gold from streambeds.

Rinehart challenged a 2009 prohibition on suction dredge mining, a practice that involves sucking up sediment from streambeds, running it through a sluice and returning it to the stream.

California criminally prosecuted him for using the practice to mine a claim in Plumas National Forest in the northern part of the state.

The California Supreme Court in August 2016 ruled that the state can ban mining if it wants. The Trump administration has yet to file briefs in the case (Greenwire, May 15).

Rinehart is represented by the conservative law firm Pacific Legal Foundation, which often brings claims to the Supreme Court on behalf of property owners.

While Rinehart’s case is pending, justices today declined to hear another PLF case claiming that the North Carolina town of Emerald Isle took the beach in front of a family’s house without just compensation. PLF attempted to argue that the town illegally extended the public trust doctrine to the dry beach in front of the home.

It takes the votes of four justices to accept a petition. Today they declined hundreds of cases, as is typical at the start of a new term.

Among the denials were Alaska’s appeal of a ruling by the 9th U.S. Circuit Court of Appeals requiring NOAA to create a new plan for managing state salmon.

The court found the agency couldn’t exclude historical net fishing areas of the Cook Inlet from its fishery management plan (FMP) for salmon.

Alaska, which has long managed salmon in the Cook Inlet, argued the court was wrong because the Magnuson-Stevens Fishery Conservation and Management Act doesn’t require the federal government to prepare an FMP for a fishery that doesn’t need one.

The Trump administration, though, urged justices to pass on the case, arguing NOAA was "well-equipped" to issue a new FMP that includes Cook Inlet (Greenwire, May 10).

The Supreme Court also declined to revive litigation brought by Northeast fishermen challenging a federal program requiring most groundfish boats to pay for their own at-sea watchdogs.

At issue is NOAA’s requirement that, beginning January 2016, fishermen pay for a multimillion-dollar, at-sea monitoring program because of a tight federal budget.

Fishermen who voluntarily joined a "sector" — or a group that shares fish quotas — must have at-sea monitors who tag along on fishing trips to ensure federal rules are followed.

NOAA partially reversed course last year and estimated it would be able to reimburse 85 percent of industry costs in 2016 and 60 percent in 2017.

New Hampshire fisherman David Goethel and Northeast Fishery Sector 13, one of the groundfish sectors, argued in their lawsuit that NOAA essentially made them join a sector by making it the "only viable economic option."

But the 1st U.S. Circuit Court of Appeals dismissed the case, finding that the fishermen had failed to file the lawsuit within a required 30-day period under the Magnuson-Stevens Act. The fishermen told the Supreme Court they "deserve a day in court" (Greenwire, July 13).

The legal question in the case concerned the standard that courts should use when deciding whether to grant summary judgment motions in antitrust cases.

Evergreen Partnering Group Inc. argued that the 1st Circuit, which ruled in favor of the manufacturers, applied the wrong standard based on a "significant misinterpretation" of precedent.

A case brought by Ohio residents over leasing land for oil and gas drilling likewise reached a dead end. The residents argued the Muskingum Watershed Conservancy District illegally leased lands that were to be used solely for recreation, conservation and reservoir development.

They were challenging a 6th U.S. Circuit Court of Appeals decision favoring the watershed district. But the Supreme Court declined to reconsider the ruling.

Justices also brought to a close fishing advocates’ attempts to scuttle a federal permit for the closure of Rollover Pass, a man-made channel Texas dug out in 1955 to allow fish and salt water to more easily access the East Bay from the Gulf of Mexico.

On the other hand, a class-action lawsuit against Stream Energy alleging a pyramid scheme will move forward in lower court after the Supreme Court declined to take up the company’s appeal of a decision certifying the class.

Stream sells electricity through a multilevel marketing program. The 5th U.S. Circuit Court of Appeals certified a class of 230,000 plaintiffs who say they’ve collectively lost more than $87 million after signing up as "independent associates" under the company’s program.