Justices wary of upending rule that could affect water law 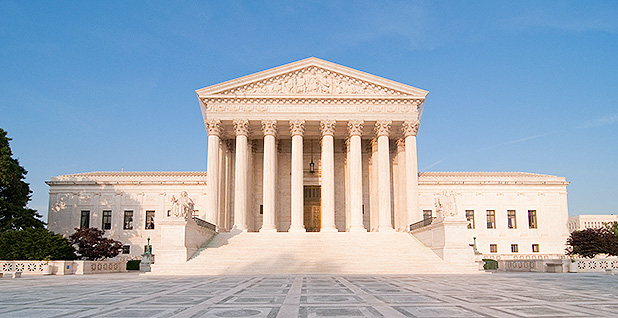 Supreme Court justices today seemed reluctant to completely upend a decades-old rule for interpreting fractured high court decisions in a case that could have implications for water law.

The Marks rule states that in Supreme Court cases for which no opinion receives a majority, lower courts should follow whichever opinion represents the "narrowest grounds." It’s named for the 1977 Supreme Court opinion in which it was created.

At oral arguments this morning, justices from both the court’s liberal and conservative wings appeared to agree that it would be difficult to find something better.

"I think law is part art and part science," Justice Stephen Breyer said. "If you ask me to write something better than Marks, I don’t know what to say."

The issue of fractured opinions arose this morning in the context of Hughes v. United States, a criminal sentencing case currently in front of the court.

The plaintiff, Erik Hughes, is appealing a circuit court’s decision to not grant a reduced sentence for drugs and weapons possession crimes. The 11th U.S. Circuit Court of Appeals based its decision on a 4-1-4 opinion that the Supreme Court issued in 2011 on whether defendants are eligible for retroactive sentencing relief.

Hughes asked justices to either reconsider the sentencing issues that were at play in the 2011 case Freeman v. United States or give the lower courts guidance on interpreting fractured decisions. Hughes argued that Marks does not work in instances where justices issue opinions that are different from but not narrower than each other.

Some experts have called on the court to take the opportunity to completely abandon the Marks "narrowest grounds" test in favor of a simple majority rule.

But Justice Samuel Alito today said that while the narrowest-grounds test could "certainly benefit from some clarification," abandoning it could have "profound" impacts.

"Marks has been the law for 40 years," he said. "For better or worse, it has had a big effect, I think, on what we have understood to be the jurisprudence of this court."

Clean Water Act litigants have been paying close attention to how the Supreme Court approaches the case because its decision it may affect how lower courts interpret the infamously muddy 2006 Clean Water Act case Rapanos v. United States.

In Rapanos, which involved a Michigan landowner’s efforts to develop property that was designated a wetland, the Supreme Court vacated lower court decisions that the federal government had jurisdiction over the wetlands at issue. But justices failed to come to an agreement on the rationale.

Joined by the court’s conservative wing, the late Justice Antonin Scalia issued a plurality opinion — meaning it did not receive five votes — arguing that the Clean Water Act only applied to "navigable waters" connected by a surface flow at least part of the year.

Justice Anthony Kennedy, on the other hand, issued a concurring opinion stating that waters must have a "significant nexus" to navigable rivers and seas, including through biological or chemical connections.

Applying Marks, lower courts have since stated that Kennedy’s significant nexus test may be used to establish the scope of the Clean Water Act. Both the George W. Bush and Obama administrations also relied on Kennedy’s opinion in guidance documents and rules. Those include the 2015 Clean Water Rule, which aimed to clarify which wetlands and streams receive automatic protection under the Clean Water Act.

Despite the potentially big stakes for water law, the Rapanos case came up only briefly at today’s arguments when Justice Neil Gorsuch noted that the Supreme Court issues "a lot of divided decisions" and asked if the "Marks problem" was real outside the context of the 2011 sentencing case.

Rachel Kovner, assistant to the solicitor general in the Justice Department, noted that "this same issue comes up" in Rapanos but said the lower courts’ difficulties were best highlighted by the 2011 decision in Freeman v. United States.

She urged justices to leave the rule in place but to instruct courts, when they are having trouble deciding which opinion is narrowest in a specific case, to run the facts of that case through the multiple opinions issued by the Supreme Court (E&E News PM, Feb. 22).

Kennedy, who wrote the concurring opinion in Rapanos, was mostly quiet throughout today’s arguments. He asked Kovner one question: whether overruling Marks would be "disruptive."

Kovner replied that it would, adding, "We believe Marks is the correct rule."

There’s a twist, though. Legal experts say that if the Supreme Court upholds Marks, it could make it harder for the Trump administration to defend its plans to replace the Obama-era Clean Water Rule with a version based on Scalia’s opinion. Such a rule would likely cover fewer bodies of water (Greenwire, Feb. 6).

The best outcome, according to Justice Elena Kagan, is for the high court to issue opinions that gain the support of at least five justices.

"The question is, what is the second best?" Kagan said. "Everything else is going to have some kind of problem attached to it."

She warned that getting rid of Marks and leaving lower courts "on their own" to muddle through fractured Supreme Court decisions would lead to "chaos."

"Why vote for chaos?" she asked.

To be sure, the court could ignore the Marks question altogether by just replacing or clarifying the ruling in Freeman. Of the justices, Justice Sonia Sotomayor — who wrote the concurrence in the 2011 case — seemed most interested in the sentencing issues that were at play then. She asked several questions of the attorneys for both Hughes and the government.

Sitting next to Sotomayor on the dais, Breyer was clear about where he stands.

"I think we’ve done all right with Marks. Leave it alone," he said.