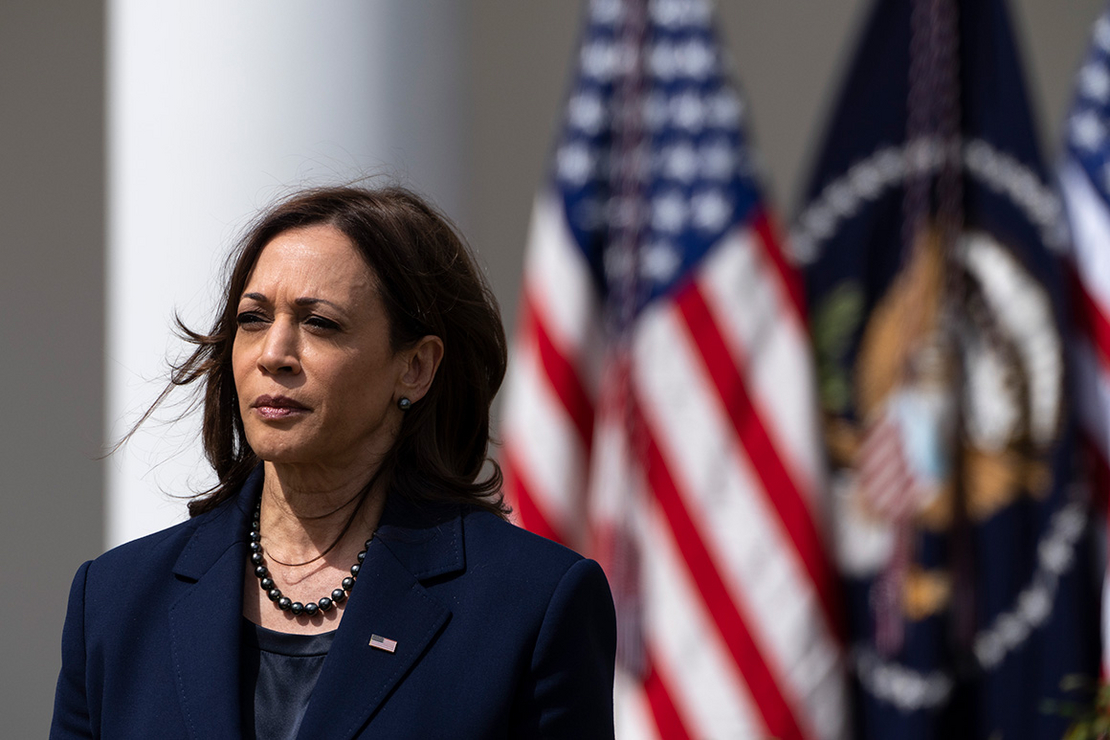 The vice president last week announced a major new Biden administration initiative to ensure global water security as climate change threatens drinking water supplies, although details of the plan remain scarce. The move comes after Harris has championed the administration’s other big water initiatives, like vowing to remove all toxic lead water pipes across the nation.

“One of the reasons the vice president was so interested in taking up water as an issue … was its ubiquity,” said Ike Irby, policy adviser to the vice president. “All communities have water issues; they experience them differently, but they all experience different pieces of the water crisis.”

Like the other complicated policy issues Harris has chosen or been handed by the administration — including immigration at the southern U.S. border and federal voting rights legislation — global water scarcity and climate change aren’t easy to solve. The water focus brings political risks but also potential rewards for a vice president looking to build her own brand and shore up her policy credentials in advance of another possible presidential run.

“I’m hoping it’s not just the press hit of the week,” said Felicia Marcus, who served as chair of the California State Water Resources Control Board and led EPA’s San Francisco-based regional office during the Clinton administration.

Marcus hopes Harris and the Biden administration follow through on their promises to elevate water issues. “I think there’s a big opportunity to do good and do well on an issue that everybody can relate to,” Marcus said, adding that she hopes to see the White House back up its pledges with staff and resources.

Democratic insiders see international water security as a likely choice for the vice president to take on, given her increased visibility on the global stage and her own experience working on drought and water issues in California as attorney general and senator.

“It’s a logical thing you would do if you wanted to expand this brand of an internationally aware vice president that’s digging in on the issues and sweating the details,” said Joel Payne, a Democratic strategist who worked on Capitol Hill and for Hillary Clinton’s 2016 presidential campaign.

It could also give her credentials she could point back to during a future presidential run, he said. “It is an issue that kind of ladders up to a life after VP for her, particularly if it’s her on the campaign trail as the head of the ticket.”

Biden has said he plans to run again in 2024, but Democrats are already quietly speculating about who might run to succeed him if he opts out. As vice president, Harris is seen as a front-runner, although political observers expect she’d join a crowded field. Burnishing her foreign policy chops — on water and other international issues — could help her.

“From her standpoint, it makes sense to bolster her national security and her diplomatic credentials,” he continued. “That doesn’t make her any different than what [Vice President Mike] Pence did, or [Al] Gore, [Dan] Quayle, or any other vice president in modern times has done.”

Harris didn’t enter the VP’s office with extensive national security experience, particularly compared to Biden, who was the longtime chair of the Senate Foreign Relations Committee and who served two terms as vice president. Becoming VP gave Harris a prime opportunity to assert herself on foreign policy issues.

Since taking the job, she has made official trips across the globe, from Mexico and Guatemala to deal with immigration issues, and to Singapore and Vietnam to strengthen relations there and unveil coastal restoration efforts. The vice president has also been deployed to Europe in recent months to shore up relations with allies in the wake of Russia invading Ukraine.

And her focus has also repeatedly pivoted to climate, water and conservation. Harris last fall visited drought-stricken Lake Mead in Nevada to promote the Biden climate agenda and highlight the West’s crippling drought. And just last month, Harris hosted climate discussions at the U.S.-ASEAN special summit in Washington, where she emphasized the dire effects of climate change, from typhoons and floods to deadly droughts.

She has been “very visible on the international stage” since she assumed the VP job, Payne said.

Harris has leaned into the issues of climate change, environmental justice and drought throughout her political career — a platform that some say reinforces her current work.

As attorney general and in the Senate, she had quite a bit of experience dealing with water issues, said Brian Brokaw, a California Democratic strategist who advised Harris on her Senate campaign.

“Water policy is something that has been a focus of hers in the past coming from California, where water is a very precious and finite resource,” he said. “Our elected leaders also have to deal with the regular challenges posed by Mother Nature, and drought and water management have been consistent themes and challenges for as long as people have lived in California.”

In 2016, Harris highlighted her climate and water record when running to succeed former Sen. Barbara Boxer (D) and warned on the campaign trail that “wars will not be fought over oil but water” (E&E News, Feb. 25, 2016).

Harris has made it a point recently to highlight her track record and experience — from water shortages as a child growing up in the West to discussing the issue as a lawmaker on Capitol Hill.

“As many of you know, I am a daughter of California,” Harris said last week at a news conference announcing the water security initiative. “And as a result, many things have probably flowed from that, pardon the pun, but one of them has been: I have been, my entire life, acutely aware of the reality of water scarcity.”

“I remember I was, I think, 12 — in middle school, about that age — 13, when we experienced an extreme drought in California,” she continued. “And I remember watching in the Oakland Hills, Northern California, the landscape turning from green to brown.”

As a senator, she dug into tackling drought, boosting equity by removing lead pipes and focusing on water contaminants. Her efforts included a bill she introduced in 2019 with Michigan Democratic Reps. Dan Kildee and Brenda Lawrence, the “Water Justice Act,” which directed $50 billion in emergency funds to test for contaminants in water and remove lead pipes from water systems (E&E Daily, July 23, 2019).

In 2020, she also introduced legislation aimed at water sustainability, particularly for low-income and disadvantaged communities. The “Water for Tomorrow Act of 2020,” S. 4188, included a nearly $3 billion investment in water infrastructure and resiliency programs, including stormwater capture and desalination projects (E&E Daily, July 8, 2020).

In the summer of 2020, Harris, serving as a senator, joined civil rights activist Dolores Huerta in writing an op-ed that ran in The Mercury News, which linked systemic racism with widespread inequity in access to clean, safe water.

“People of color face unique obstacles when accessing necessities that many take for granted — things such as health care, jobs, good schools and healthy food. And especially clean water,” they wrote.

“Just as racial injustices have driven disparities in COVID-19, racism fuels disparities in access to safe water,” they continued. “In fact, race is the primary indicator of whether someone in the United States has basic plumbing. Systemic barriers, including redlining, disinvestment, unregulated pollution and neglect of Tribal water rights stand in the way of safe and affordable water for millions of people, particularly Black, Indigenous and communities of color.”

Water at the White House

Harris put her past experience to work as vice president.

“That message was heard throughout the White House,” said Irby.

That work laid a natural foundation for Harris to lead on connecting water and national security.

“Even when I was in the Senate, you know, we would talk about this issue in some of the committee hearings when we were reviewing nominees, and the connection between this issue and national security,” Harris recalled.

“People laughed it off,” she said, remembering how senators asked if water security was a “serious issue.”

“Let’s get in front of this,” Harris continued. “Let’s take it seriously.”

Water advocates are eager to have a White House spotlight on the issue of drought and water scarcity, an element of the climate conversation that oftentimes gets overlooked. They also said it makes sense given Harris’ background.

Drought isn’t the only water issue Harris has been out front and center on. She’s also made multiple trips — appearing in cities like Milwaukee and Newark — to highlight environmental inequity and dole out funds from the newly minted infrastructure package, which included $15 billion to remove lead service lines snaking underground throughout the country contaminating drinking water.

In late 2021, Harris unveiled the Biden administration’s multipronged plan to eradicate lead from paint and drinking water in vulnerable communities within the next decade (E&E Daily, Dec. 16, 2021).

Goldstein with St. Louis University School of Law said Harris appears to be settling into more of a conventional vice presidential role of focusing on concerns of the administration and serving as a spokesperson of their successes and issues they want to emphasize, which includes climate change and environmental justice.

“But she’s also talking about abortion, she’s talking about climate change, about ‘Build Back Better,’ about broadband … things that are important to the administration,” he said.

By adding her own personal touch and experiences to those announcements — as she did with the water security plan — Goldstein said Harris is not only spotlighting a Biden administration priority but also emphasizing her own background and credentials.

“A vice president, in addition to wanting the administration to be successful, oftentimes wants to promote themselves as well,” he said.