Kamala Harris’ enviro record under scrutiny as she mulls run 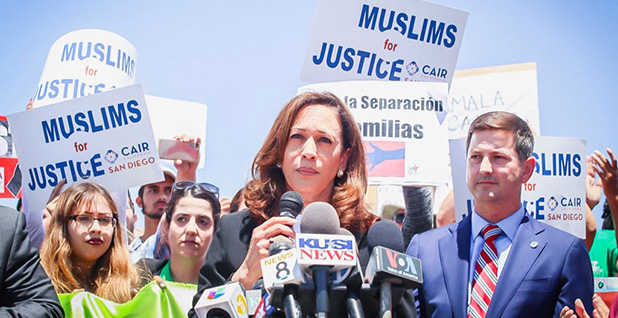 Running for president in 2020 as an environmental progressive is officially on California Democratic Sen. Kamala Harris’ radar.

The first-term senator — who has been active on lands, oil and other green issues — acknowledged it was a possibility when MSNBC reporter Kasie Hunt asked about a 2020 run.

Groups including Climate Hawks Vote are urging her to ask about issues including Massachusetts v. EPA, a 5-4 high court ruling that gave EPA authority to regulate carbon dioxide emissions under the Clean Air Act. Retiring Justice Anthony Kennedy was the deciding vote, siding with the four liberal justices.

Harris has pushed for help for Puerto Rico as it recovers from Hurricanes Irma and Maria. She’s spoken out on economic issues, supporting Sen. Bernie Sanders’ (I-Vt.) "Medicare for All" legislation, S. 1804.

She’s raised $4 million to help campaigns for her fellow senators and others running for re-election. She’s funded more than $356,000 in digital ads.

"She is very smartly laying groundwork in the event that she chooses to take a shot," said Sragow. "She’s very adept at creating a presence for herself in the world of politics."

Harris made the list — just barely — of potential candidates for 2020 desired by Democratic voters in a poll released last month by the Center for American Political Studies at Harvard University working with the Harris Poll (no relation to Sen. Harris). It asked likely voters their preferred person for the Democratic nomination. Harris won support from 2 percent of voters.

One GOP analyst said Harris, if she chose to run, would "have a shot at the nomination."

"She’s been a rising star for some time," said Rob Stutzman, a Republican strategist in Sacramento. "She’s articulate, she’s attractive, she would have a leg up on a fundraising base that could be substantial."

As a result of her ability to raise money, Stutzman said, Harris "could emerge as someone who could sustain themselves through the first five, six primaries and caucuses and have a real opportunity to be one of the last two or three people standing in the nomination process."

She could create a brand, he said, that could allow her to collect small donations. However, if Sanders and Warren are in the field, it could get crowded for Harris because all would aim for the far-left camp.

Harris’ campaign arm declined to elaborate on her comments about the 2020 presidential election.

Harris, 53, has broken barriers. Before she took office as senator, she was the first woman, first African-American and first Asian-American attorney general in California.

She’s the daughter of two immigrants. Her mother, the late Shyamala Gopalan Harris, came from India and worked as a breast cancer researcher. She died in 2009. Harris’ father, Donald Harris, emigrated from Jamaica. He’s a Stanford University professor emeritus in the Economics Department.

In addition to Judiciary, she’s on the Intelligence, Budget, and Homeland Security and Governmental Affairs committees. Those assignments "don’t give her a high profile on climate issues," said Steve Maviglio, a Democratic strategist in California.

However, she’s viewed as a strong ally in the environmental community, according to Sara Chieffo, vice president of government affairs at the League of Conservation Voters. Harris has a 100 percent rating from LCV, a scorecard based on votes.

In the current Republican-controlled Congress, most of those are opposition votes against bills to roll back protections on land and water, rules to limit climate change, and more, Chieffo said.

"Kamala Harris has a long record of environmental achievement both here in the Senate and also in her leadership roles" in California, Chieffo said. "She has been quite vocal on protections for our environmental and kids’ health and standing up to attacks on our public lands."

Harris has been adamant about California’s right to set clean car rules beyond the federal standard, Chieffo added.

At a confirmation hearing for Mike Pompeo to be the nation’s top diplomat, Harris questioned him about whether he accepted NASA’s findings — and that of 97 percent of scientists — that climate change is "extremely likely due to human activities."

"She’s been a very vocal part of the Senate pro-environment firewall and pushing back on this administration," Chieffo said.

RL Miller, president of Climate Hawks Vote, said Harris has green credentials, is a reliable vote on environmental issues and would be a formidable candidate for the Democratic presidential nomination. All that said, she is not a champion on the issue, Miller said.

"She’s not a natural leader on the subject of climate change, and she hasn’t really done anything to single out a portion of the climate change debate as hers," Miller said.

Miller said there’s lots of opportunity to step up because "you can tie climate to anything," including immigration, national security and legal matters.

Harris’ spokesman Tyrone Gayle in an email listed a number of green issues he said she’s led on, including S. 3087, to provide grants to communities to invest in natural infrastructure to combat the impacts of sea-level rise and exacerbated storms. She’s asked for a Government Accountability Office report on the impact of climate change on Superfund sites, which should be done this year, he said.

Too liberal for Iowa?

Harris’ politics fit with California. But she could have a tough time winning support in other parts of the country, said Garry South, a California-based Democratic strategist who’s worked on several presidential campaigns.

Coming from California, especially San Francisco, carries a stigma in many other states, he said.

Other Californians who have run for president haven’t done well, with the exception of Republican Presidents Reagan and Nixon. Both of them had been out of a California office for some time, and Nixon was living in New York when he ran.

"Part of the problem with Californians running is that California is, I think everyone would agree, is an aberrationally liberal state compared to the rest of the country," South said. "It’s called la-la land. It’s called the left coast. Now it’s called the headquarters of the resistance."

"Being within the mainstream of politics in a state that is so deep blue puts you outside the mainstream in some ways when you go into some of these other states," he said.

Sragow said that’s true and that it’s a hurdle Harris will have to overcome.

"It’s a very daunting task, but I mean she’s done very well for herself," he said. "Probably her political experience to date tells her if she takes a difficult challenge head on, she can succeed."

Some suspect Harris is trying to attract a broader base of voters by talking about economic issues and health care.

"Environmental issues are almost never at the top" among voters, Sragow said. "They’re just not. Economic issues almost always are."

GOP analyst Stutzman also said that "the further left the Democrats nominate a candidate, the more the likelihood increases that Trump could be re-elected."

Harris "would fall into a category that would increase Trump’s odds versus, say, more of a moderate governor," Stutzman said, or against Biden.