Katrina spurred a mass migration. Will Ida do the same? 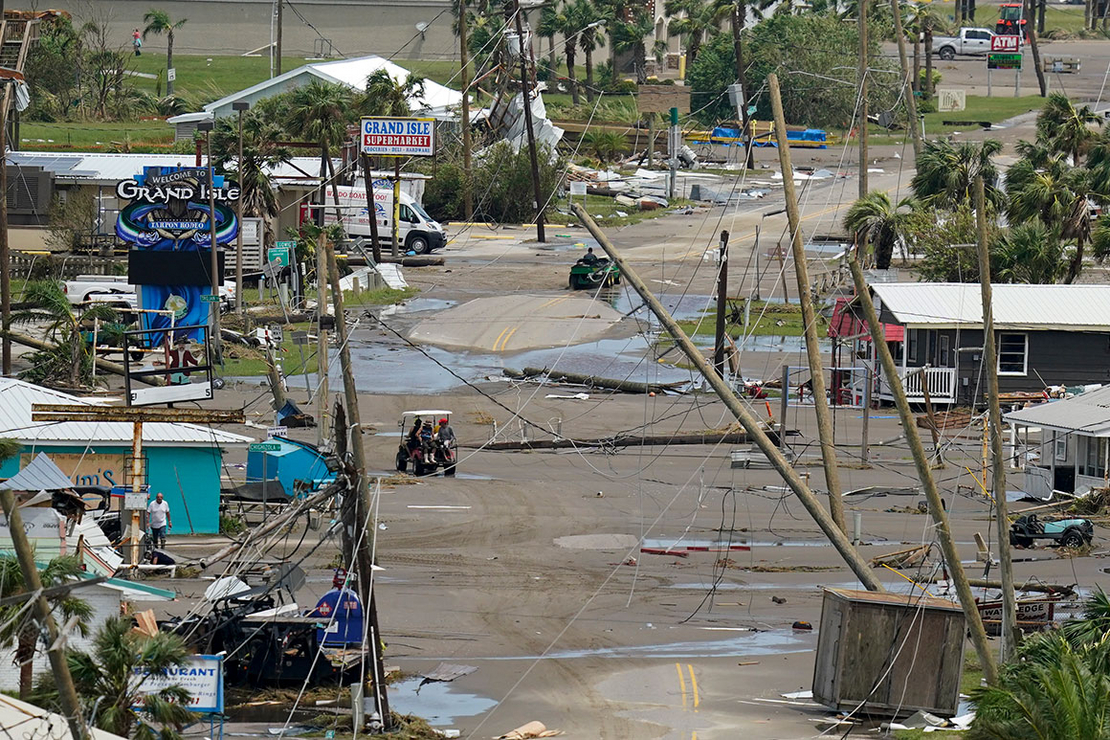 The remains of destroyed homes and businesses are seen in the aftermath of Hurricane Ida in Grand Isle, La., on Aug. 31. Gerald Herbert/AP Photo

Southeast Louisiana is bracing for a mass exodus following Hurricane Ida, which has killed at least 13 people in the state and left hundreds of thousands without power, water and other essential services.

While preliminary estimates are rough, experts say the storm could force tens of thousands of people from their homes in four parishes hardest hit by Ida: Lafourche, Jefferson, Plaquemines and Terrebonne.

Most of Ida’s damage is concentrated below New Orleans — which saw high winds but relatively modest flooding. But experts say there are potential parallels between what’s happening now and what happened after Hurricane Katrina devastated the Big Easy in 2005.

More than 250,000 residents left New Orleans after Katrina swamped the city, killing roughly 900 people in Orleans and St. Bernard parishes, according to the Louisiana Department of Health. Other estimates put the death toll much higher, and there is little consensus on an official tally.

If a similar percentage of people are displaced by Ida, permanent losses could exceed 130,000 people, mostly from rural areas and small cities, experts say. But displacement could extend into the New Orleans metropolitan area, particularly north Jefferson Parish along the Mississippi River.

“No question these outside parishes are going to see declines. The question is how much and how fast,” Jesse Keenan, associate professor at the Tulane School of Architecture and expert on climate migration, said in a telephone interview. “A lot of people simply won’t have the resources to come back, and resources aren’t available at the parish level, either. There are long-term fiscal implications to school systems, water and sewer systems, and everything else.

“When we’re hit by one of these big storms, we lose a lot more than people,” Keenan said. “We lose a little bit of our souls.”

The lost souls from Ida are among the most isolated and culturally distinct in America. They include roughneck oil and gas workers, native fishermen and farmers, small business owners, and thousands of Indigenous people, including members of the 19,000-strong Houma tribe and other Native communities.

“This is one of the largest storms to hit the Louisiana coast. And all our people live, you know, along the Gulf Coast,” August Creppel, chief of the Houma Nation, told NPR over the weekend. “And some of them are fishermen and things like that. We are state-recognized tribes, not federally recognized, so we get no state privileges or anything. Anything we want or need, we have to try to get it ourselves.”

As after Katrina, experts say the reshuffling of southeast Louisiana’s population will provide a case study of climate migration — the permanent relocation of established populations from regions where climate change impacts are creating untenable living conditions.

Demographers and adaptation experts say that tens of millions of U.S. residents could be displaced in the coming decades, as worsening disasters and other climate stressors push people away from coastlines, floodplains, heat islands and wildfire zones.

Richard Campanella, associate dean for research at Tulane’s architecture school, said hurricane-damaged parishes south of New Orleans have bounced back from storms before because they “are place-based economies that were not considered portable.” That is less true now as residents, property owners and some businesses shift inland.

A new wave of displacement from Ida is certain, he added, because “conditions are close to unlivable in many areas.”

For those determined to return, post-Ida living conditions will depend on several factors, including the speed at which essential services such as electricity and water can be restored. Entergy Corp., which provides power to the Ida-destroyed parishes, said more than 450,000 customers remained without power yesterday, including nearly all its customers in the parishes south of New Orleans.

The utility said it expects to restore power to lower Jefferson, Plaquemines, Lafourche and Terrebonne parishes by Sept. 29, exactly one month after Ida made landfall on the 16th anniversary of Katrina. Some residents may not be able to wait that long, especially those whose livelihoods are gone and whose damaged properties are exposed to harsh weather conditions that are part of everyday life in the marsh.

Keenan said that the region will be sustained temporarily by relief and recovery workers, but that the long-term outlook looks less promising. “People will flood in opportunistically from Texas to clear trees out of your yard and restore your power, but they won’t stay any longer than they have to,” he said. “Why would they when there are a million other jobs out there that don’t require living in a hurricane zone? The bottom line for these rural parishes is ‘good luck.’”

In small fishing communities such as Dulac, prospects for rebuilding are grim. The enclave is located 17 miles south of Houma in Terrebonne Parish, whose population has shrunk from 1,500 to 1,200 since 2010. “It pains me to say, but I can’t imagine the few remaining folks down there being able to sustain another generation,” Campanella said. “Ida may well be the last chapter in that story.”

But as the lowest-lying parishes hollow out, some nearby areas could feel a post-Ida surge. Orleans and St. Bernard parishes, for example, have boomed since the late 2010s as memories of Katrina fade and perceived risk from destruction wanes — a bump fueled by the Army Corps of Engineers’ $14 billion fortification of New Orleans’ hurricane protection and flood control system.

Campanella, reached in New Orleans’ Uptown District on Friday, said new and existing residents have grown more confident about their risk from climate impacts, due in part to the city’s new levees.

“Here’s an old city that’s usually at the wrong end of the way these things play out, but it’s actually faring pretty well,” he said.

Asked how Ida would affect residents’ calculations of future risk, Campanella said a sense of relief — at least for now — may be warranted.

“‘False security’ is a phrase that was used ad nauseam 15 years ago, but I’m not using it this time,” he said. “Many people are making individualized decisions about leaving. But the nation’s taxpayers spent almost $14.5 billion for this storm risk reduction system, and that should come with a dividend.”